Like many of the sites and objects detailed in this blog, it’s quite possible to walk past the London Stone and never realise that it is there.  It’s easy to miss the grate pictured below, which is situated at street level on the front of a nondescript modern building on Cannon Street in the City of London. 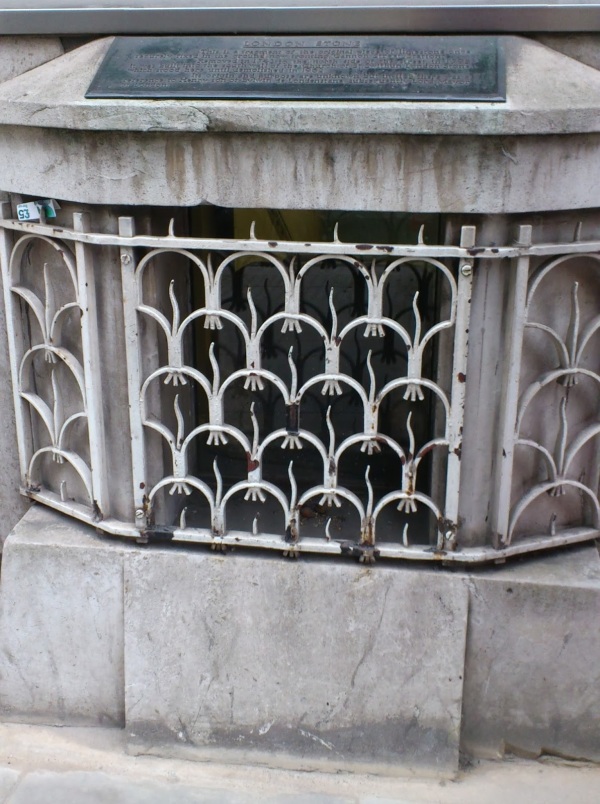 The London Stone has a long and singularly odd history, with its origins shrouded in legends, fairytales and hearsay.  Similar to the superstition surrounding the ravens of the Tower of London, a saying goes that “So long as the Stone of Brutus is safe, so will London flourish.”  However, like the ravens, it is likely that this romantic myth dates from the Victorian period, although both superstitions still persist today.

The “Brutus” named in the saying is the legendary figure Brutus of Troy, a mythical founder of London.  Brutus is purported to be a Classical hero, who defeated a race of giants and founded London, becoming King of Britain.  This legend was first recorded in the 9th Century and made famous in the 12th Century by Geoffrey of Monmouth’s Historia Regum Britainniae.  According to Geoffrey, Brutus built a temple of Diana on the site now occupied by St Paul’s Cathedral and the London Stone was an altar in this temple.  Whatever ruins do lie beneath St Paul’s (another theory about the Stone is that it came from a stone circle on Ludgate Hill) it is unlikely that the story of Brutus is anything but myth.  Brutus’ Classical origins suggest an attempt at creating a link between Britain and Classical civilisation and indeed there are no records of Brutus of Troy in surviving Classical texts.

Another theory about the Stone’s origin is that in Roman London it was used as the point from which all distances were measured – a milliarium, although no surviving Roman records made any reference to such a thing in London.  Given that such objects were used by the Romans, though, the lack of any surviving records cannot be seen as confirmation that the Stone was not Roman in origin.

But what do we know for certain about the Stone?

The earliest known written reference to the London Stone is in a document referring to rental properties and (like the Roman milliarium theory) their distances from the London Stone.  This document belonged to Æthelstan, a king of the West Saxons in the 10th Century.  So regardless of whether or not the theory about the Stone being a Roman milliarium is correct, there is proof that the Stone was, for some of its life at least, used as a point from which to measure distance.  By the late 12th Century, “Londenstane” began to appear on maps, suggesting that the Stone was a significant landmark at this time.  Interestingly, the first Mayor of London, who entered office in 1189, was called Henry Fitz-Ailwin de Londonestone.  The inclusion of “Londonestone” in his name may be as innocuous as simply a reference to the part of town his family was from but again suggests that the Stone was a well known landmark.

In the medieval period, the Stone made an appearance during a tumultuous episode in London’s history.  During a rebellion against Henry VI in 1450, the rebel leader Jack Cade allegedly struck the Stone with his sword and proclaimed himself mayor of the City.  Shakespeare immortalised this act is his play Henry VI, Part 2.

Now is Mortimer lord of this city. And here, sitting upon London-stone, I charge and command that, of the city’s cost, the pissing-conduit run nothing but claret wine this first year of our reign. And now henceforward it shall be treason for any that calls me other than Lord Mortimer.
(Act 4, Scene 6)

In 1598, John Stow’s famous “Survey of London” described how the Stone often got in the way of everyday life in London.  “If carts do run against it through negligence, the wheels be broken, and the stone itself unshaken.”  It is perhaps at least partly due to these collisions that the Stone gradually became smaller over the years.  John Strype, in the 1720 version of his “Survey of the Cities of London and Westminster” commented that “this stone before the Fire of London, was much worn away, and as it were but a stump remaining.  But it is now for the Preservation of it cased over with a new Stone handsomely wrought, out hollow underneath so as the old Stone may be seen, the new one being over it, to shelter and defend the old venerable one” (Book 2, Chapter 13, p.200, paragraph 9)

After the Great Fire of 1666, Christopher Wren witnessed the Stone’s foundation being excavated during the rebuilding of St Swithin’s Church in 1678.  From what he saw, Wren speculated that the Stone was part of a larger Roman structure.  It is indeed possible that this is the origin of the Stone, as archaeologists excavating the site after the Second World War found evidence of a Roman street running along the line of the present Cannon Street.

As London grew and became even busier, the Stone’s location in the middle of Cannon Street started to become problematic.  Despite it being protected by the new stone casing that Strype describes, the Stone was hazardous to traffic (as Stow had described in 1598) and was moved on more than one occasion, first in 1742 and again in 1798 when it was set into the wall of the nearby St Swithin’s church.  A grille was put in place in front of the Stone in the 19th Century for protection.  This might have been how the Stone would have remained until the present day, but during the Second World War St Swithin’s was hit during an air raid and completely gutted.

The Stone was not destroyed and it was preserved in the ruins of St Swithin’s until the church was demolished in 1961-2.  Following this, the Stone was installed in its present position in a rather gloomy building that was erected on the site of St Swithin’s. The grey concrete does not seem fitting for an artefact with such a colourful history.

It’s impossible to prove very much about the London Stone.  For centuries it has puzzled and enthralled Londoners and it’s possible that somewhere amid the all the rumours there may be some grains of truth about its origins and purpose.  Even today, when the future of the building that houses it is called into question, furious debates take place about what should happen to the Stone.  Whatever it really is, the London Stone has been part of the fabric of London for a very long time and will very likely continue to inspire stories, legends and tales in years to come.

This blog post was originally published on Historical Trinkets on 23rd January 2014.

UPDATE: The London Stone spent some time on display at the Museum of London while the building that housed it was redeveloped, but it has now been returned to its home on Cannon Street.

3 thoughts on “Sifting through the stories about the London Stone”

A beautiful day to explore an old churchyard. This is St Wilfrid, Ribchester, a Lancashire church said to have been founded by St Wilfrid himself. It stands close to some of the ruins of Roman Ribchester, & the churchyard contains many lovely 18th & early 19th Century table tombs. I wrote about the grave of Thomas Greenwood, buried here after his tragic death: https://flickeringlamps.com/2015/12/26/the-lonesome-grave-of-a-travelling-labourer/
Today's new article on Flickering Lamps (link in bio) looks at one of the more unexpected residents of Putney Vale Cemetery in south west London - Alexander Kerensky, Russia's first leader after the downfall of the tsarist regime in 1917. Kerensky spent most of his life in exile in France & America, so how did he come to be buried in London?
NEW EVENT!