In the shadows of the international terminal at St Pancras Station, close enough for platform announcements to be heard, is a tiny old church which has a history that supposedly stretches back almost as far as St Pancras himself.  St Pancras was a Roman martyr who was beheaded in about 304AD for his Christian beliefs, and the church claims that the site has been a place of Christian worship since the 4th Century.  Until the 19th Century, Old St Pancras was a rural church, close to the River Fleet, but today it is nestled in amongst the railway infrastructure of St Pancras and the houses and flats of Somers Town. When approaching the church, the first thing that struck me was how high the ground level of the churchyard is compared to its surroundings.

The church’s own website claims that a place of Christian worship has existed on the site since 314AD.  Evidence of Roman activity has been found in the area, which gives some strength to this claim, but no concrete evidence of a Christian site dating back so far has yet been found.  It is possible that the church’s dedication to St Pancras dates from St Augustine’s mission to Britain in the late 6th Century – in Rome, St Augustine had lived close to the site where St Pancras had lived and died.  A 6th Century altar stone survives at the church today.

The first clear evidence of Old St Pancras’ existence is in the 12th Century, in two land deeds dating from around 1160-1180.  Due to the fluctuating population of the area, Old St Pancras went through a number of long periods where the church was little used.  The River Fleet, which ran nearby (it is now underground) flooded from time to time and a chapel was built in Kentish Town in the 15th Century so that parishoners living in that area could still attend church when St Pancras was inaccessible due to flooding.

By the end of the 16th Century, Old St Pancras was isolated and falling into disrepair.  Topographer John Norden described the church in 1593:

Pancras Church standeth all alone, as utterly forsaken, old and weather-beaten, which for the antiquity thereof it is thought not to yield to Paules in London. About this church have bin many buildings now decayed, leaving poor Pancras without companie or comfort, yet it is now and then visited with Kentishtowne and Highgate, which are members thereof; but they seldom come here for they have chapels of ease within themselves; but when there is a corpse to be interred, they are forced to leave the same within this forsaken church or churchyard, where (no doubt) it resteth as secure against the day of resurrection as if it laie in stately Paules. (source)

By 1848 the church was in a very poor state of repair and was completely remodelled, which saved the building but had some unfortunate consequences. “The historical interest of the ancient building was largely destroyed.” (source)  The tower pictured on the 1815 image above was demolished and a new south tower was built, and doors and windows were replaced.  The new doors and windows had a Norman-style design, presumably with the intention of hearkening back to the church’s earlier years.

Inside the church, the simple interior contains many features that date from much earlier than the 19th Century remodelling.

Sadly, another feature to be seen inside the church is the presence of a number of large cracks in the walls – a sign of the church’s peril as ancient drains beneath it threaten the building’s stability.

The coming of the railways in the 19th Century had a huge impact on the church in the 1860s – a large part of the burial ground had to be dug up and around 10,000-15,000 bodies were relocated to a mass grave nearby.  The burial ground, which had closed to new interments in 1858, was converted into a public park.  A young Thomas Hardy was involved in the remodelling of the burial ground – it was he who created the cluster of gravestones that now ring the “Hardy Tree”, which sprang up in the midst of the stones.

In 1882 Hardy wrote the poem The Levelled Churchyard, which rather humourously describes the disturbed burials which were reinterred in a mass grave following their exhumation to make way for the railway.

We late-lamented, resting here,
Are mixed to human jam,
And each to each exclaims in fear,
‘I know not which I am!’

Where we are huddled none can trace,
And if our names remain,
They pave some path or p-ing place
Where we have never lain!

One of the most famous exhumations from this period was that of the pioneering feminist writer Mary Wollstonecraft and her husband William Godwin.  Mary Wollstonecraft’s most famous work is The Vindication of the Rights of Woman.  Mary and William had lived locally, at the Polygon, and were married at Old St Pancras church in 1797.  Mary was to die only months later after contracting blood poisoning following the birth of her daughter, also called Mary.  When the younger Mary was in her teens, she would meet her beau Percy Bysshe Shelley at her mother’s tombstone before they ran away together to the Continent.  When the burial ground was threatened by the development of the railways, Sir Percy Shelley – son of Mary and Percy – arranged for his grandparents’ graves to be relocated in 1851.  Their remains now rest in Bournemouth, but their gravestone remains at Old St Pancras.

Another wave of exhumations was necessitated in 2002-3, as extra land was needed to accommodate the new Eurostar terminus at St Pancras Station.  This was a controversial move, with the media discussing the ethics of disturbing burials to make way for railway infrastructure – a topic that has recently been brought up again with regard to the proposed HS2 rail route.  From the burials disturbed by this work archaeologists were able to gain a fascinating insight into a cross-section of the people who had been buried at Old St Pancras.  The clay soil and wet conditions meant that many of the burials had exceptionally well-preserved coffins and even inscribed coffin plates, which gave researchers the ability to name some of the individuals exhumed.  Amongst these named individuals were a number of French immigrants, who had moved to London after the French Revolution.  One of the individuals who was identified was Archbishop Arthur Richard Dillon, who was buried with a fine set of porcelain dentures.

Bizarrely, the archaeologists also found a number of bones belonging to a large walrus.  The bones of this huge creature showed signs of being dissected – perhaps it had been used by a scientist for research or a presentation, and then buried later on.  Evidence of dissected human remains, found in the trenches where paupers’ burials took place, could possibly point to grave robbery.  The mass burial trenches would have been more vulnerable to the attentions of the “resurrection men” than private graves, as it would have been easier to steal remains without detection.  In A Tale of Two Cities, Charles Dickens names Old St Pancras as the site of Jerry Cruncher’s grave robbing.  The burial ground would have been a prime spot for grave robbery as it was more rural than many of London’s churchyards and not so well guarded.

The burial ground reopened as a public park in 1877, and became known as St Pancras Gardens.  Angela Burdett-Coutts, a wealthy banking heiress and philanthropist, paid for a remarkable memorial sundial that commemorated those whose bodies had been moved to make way for the railway.  The monument, completed in 1879, has a Gothic tower that resembles that of the nearby St Pancras Station, and the base is decorated with mosaics.  It looks a little overgrown these days, but is still an extremely striking structure.

One of the most famous tombs in St Pancras Gardens is that of architect Sir John Soane and his family.  Designed by Soane himself, the tomb is Grade I listed and its distinctive shape is said to have inspired Sir Giles Gilbert Scott’s design for the iconic red phone box.  On the top of the dome is a pinecone, an ancient Egyptian symbol of regeneration.

Today, St Pancras Gardens is a peaceful place, far removed from the days of exhumations and body snatchers.  The church is part of the Old St Pancras Team Ministry, which also includes other churches in the Camden area.  In order to raise funds for the building’s repair, the church has more recently become a venue for lectures and music concerts.  After so many years of being a backwater church and chapel of ease, it is encouraging to see this ancient site of Christianity once again at the heart of its community and hopefully the building will be saved for many generations to come. 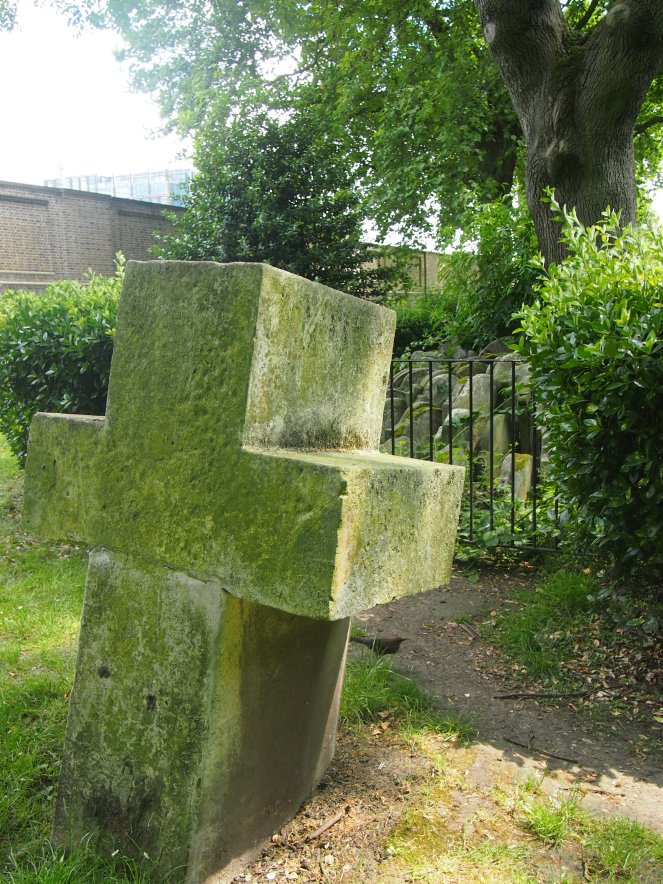 ‘“…The Most Remarkable Woman in the Kingdom.” Or, The Philanthropy of Angela Burdett-Coutts’, The Victorianist, 28th April 2011, http://thevictorianist.blogspot.co.uk/2011/04/most-remarkable-woman-in-kingdom-or.html