London’s Square Mile is notoriously short of green space.  A crowded maze of winding streets for many centuries, the City of  London was originally bound by the ancient Roman walls and as the city expanded open spaces became further and further away for those living in the dirty and overcrowded centre of town.  Although the Royal Parks of London have a longer history, it was the Victorians who first advocated a wider movement for open spaces in Britain’s industrialising towns and cities.  Much of the reasoning behind the parks movement came from the belief that the widespread disease in urban areas came from dirty air – or ‘miasma’ – and parks were seen as a way to improve the health of those who could not afford gardens or country retreats of their own.

It is perhaps a little ironic, then, that the subject of today’s blog, the Postman’s Park, is built on the site of one of the most pressing public health problems of the nineteenth century – the graveyard.  Catharine Arnold’s grimly fascinating Necropolis – London and its Dead documents in gruesome detail the problems faced in Victorian London when it came to burying the city’s dead. The eventual solution to the overcrowded, insanitary and undignified burial grounds dotted around London was the creation of the ‘Magnificent Seven’ cemeteries in the suburbs between 1832 and 1841 – Kensal Green, West Norwood, Highgate, Abney Park, Nunhead, Brompton and Tower Hamlets – which provided huge spaces where people could be laid to rest away from the city’s water supplies and with enough room that bodies would not have to be disinterred after a short time and disposed of to make way for new burials.  The Burials Act of 1851 prohibited any new burials in the old churchyards in built up areas.  Many of these burial grounds were subsequently redeveloped, but after its closure it was decided that the churchyard of St Botolph Without Aldersgate would be converted into a public park.  The following announcement was made in 1858:

The Churchwardens of the above parish hereby give notice that they intend to plant, pave, or cover over the churchyard and burial-ground. Persons having relatives interred in the said churchyard or burial-ground will be permitted (under certain regulations) to remove and inter the remains of such relatives in any burial-ground or cemetery, without the city. Persons also, to the memory of whose relatives any tomb, monument, or inscription may have been erected therein, may (under the like regulations) cause such tomb or grave-stones to be removed and taken away; but such removal, in either case, must be at the expense of the persons causing the same to be done. Applications for either of the above purposes must be made, in writing, on or before Monday, the 20th day of December, 1858. (Source)

The clearing and landscaping of the burial ground was a slow process, taking many years.  The gravestones that were not claimed by relatives were rearranged to make up the boundaries of the park and remain there today. 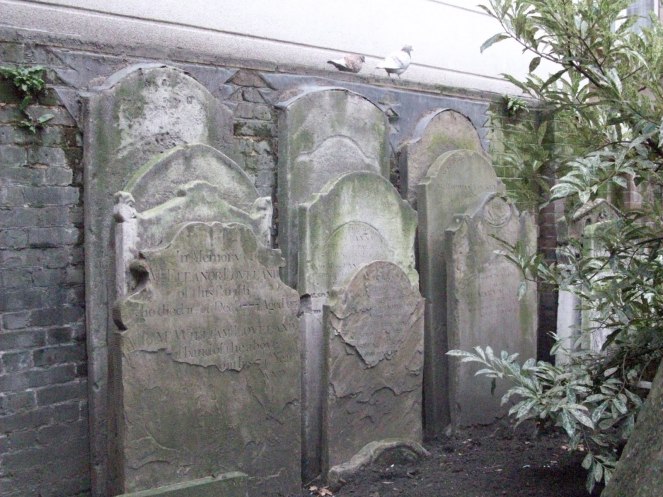 The park, which can be found a short distance north of St Paul’s Cathedral, with entrances on Aldersgate Street and King Edward Street, is on the site of the former burial grounds not only of St Botolph Without Aldersgate, but also of Christ Church Greyfriars and St Leonard’s Foster Lane.  St Leonard’s was one of the churches not rebuilt after the Great Fire, and Christ Church Greyfriars was destroyed in the Blitz (its ruins are now a pleasant flower garden).  Because of its burial ground history, the ground level in the park is several feet higher than that of the surrounding streets.  The latter two churchyards were adjacent to that of St Botolph, but because of their smaller parishes and slower burial rate when they were acquired by the parish of St Botolph their ground level had to be raised to match that of St Botolph’s.

Eventually opened in 1880, the park soon gained its name due to its popularity with workers from the nearby General Post Office headquarters.  Today it is still a popular place for City workers to congregate during their lunch breaks, but it is also a frequent stop for tourists due to its famous monument – the Memorial to Heroic Self-Sacrifice.

Featured in the 2004 film Closer (pictured above), the Memorial to Heroic Self-Sacrifice was the brainchild of artist George Frederic Watts and his wife Mary.  The Memorial consists of a covered walkway with memorial tablets commemorating ordinary people who had given their lives whilst attempting to save the lives of others.  The wall was unveiled in 1900, although by this point only four memorial tablets had been installed on the wall. 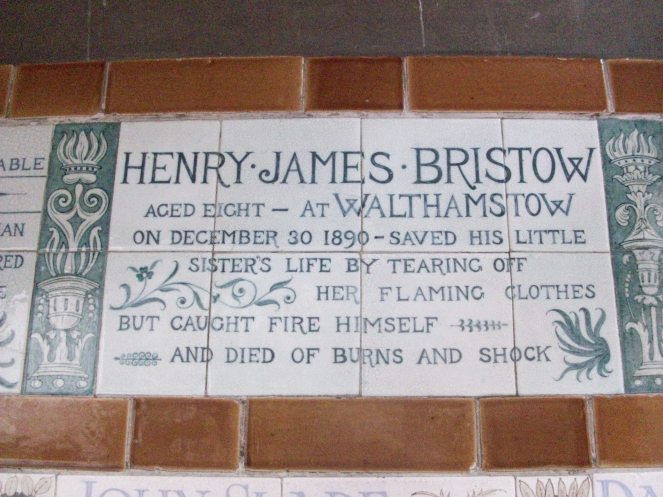 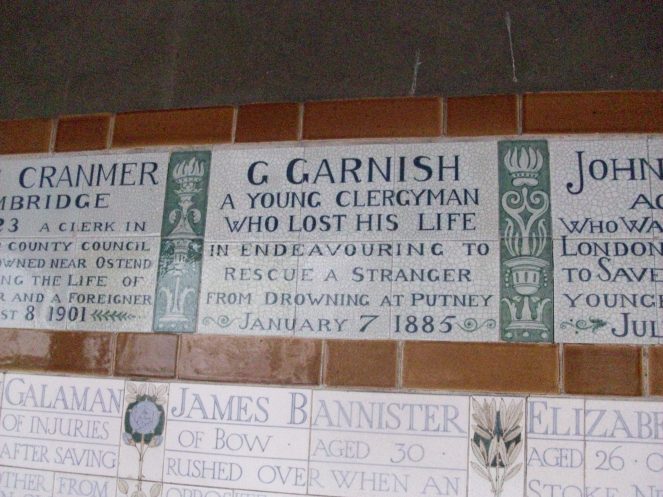 The memorial tablets are made of ceramic tiles, which were cheaper to produce than engraved stone.  The design and styling of the tiles is not completely uniform – although they all follow the same basic principle of green or blue writing on a white background – as the memorials were not all produced and installed at the same time.  The wall has space for 120 of these memorials but a lack of funds meant that the project was halted in 1931 with just 53 memorials in place – and only a few of these had been sporadiacally added since Watts’ widow withdrew funding from the project in 1910 (although she continued to have an interest in the memorial until 1930).  The tablet below is one of the later designs produced by Royal Doulton and installed in 1908. 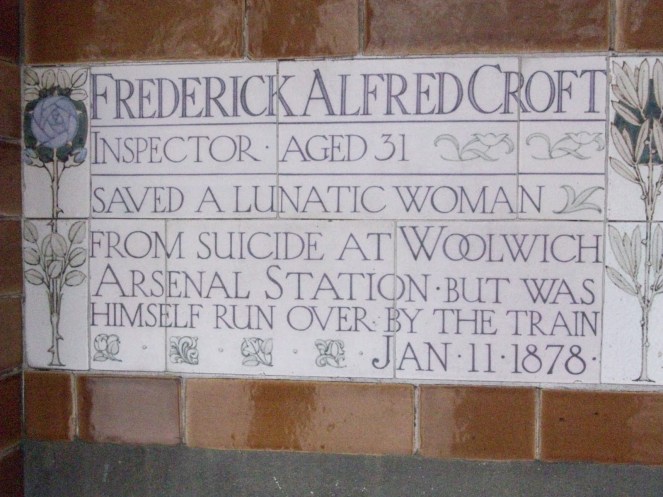 No new memorials were added to the wall until 2009, when a tablet dedicated to the memory of Leigh Pitt, who had drowned in a canal in 2007 after diving in to save a drowning boy, was unveiled.

Taking in the memorials is quite a sad and poignant experience, each one telling a story that were it not for the memorial would now be forgotten, consigned perhaps to a couple of column inches in an old newspaper and no more.  George Watts personally chose many of those to be immortalised on the memorial, but with Watts in failing health, and after his death, others were chosen by a committee.  This committee was originally named the ‘Humble Heroes Memorial Committee’ but Watts objected to this and it was renamed the ‘Heroic Self-Sacrifice Memorial Committee’.

Watts died in 1904 at the age of 87 and a special plaque designed by T.H. Wren was added to the memorial and unveiled in 1905.  It depicts Watts holding a scroll with the word ‘heroes’ written on it.  The caption below the figure reads ‘In memorial of George Frederic Watts, who desiring to honour heroic self-sacrifice placed these records here‘.

However, not quite all of the inhabitants of the park – whether they be commemorated on the Memorial or rest under the soil – are deceased.  Spend a lunchbreak in the park and chances are you will encounter the exceptionally friendly robins that live there – the little chap pictured below was tame enough to take crumbs from my hand.  These cheerful residents add to the special atmosphere of the Postman’s Park – if you’re in that part of town, perhaps en route to St Paul’s or the Museum of London, do pop in for a look around and make time to read the memorials.  It is a peaceful oasis in one of most crowded and busy parts of London. 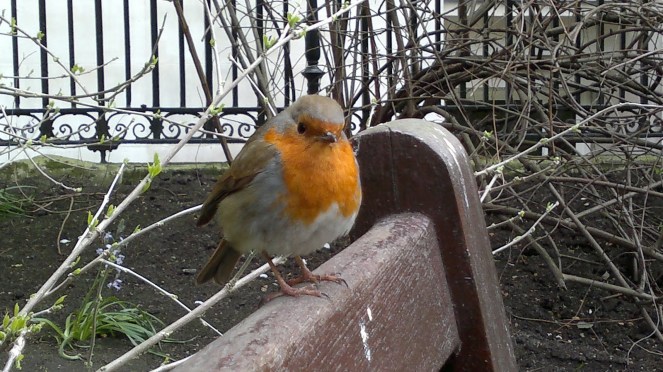 To learn more about Watts and the Postman’s Park, I highly recommend John Price’s 2008 book Postman’s Park: G. F. Watts’s Memorial to Heroic Self-sacrifice, which was published by the Watts Gallery.

This post originally appeared on Historical Trinkets on 14th July 2011.