I first came across the ruined chapel whilst on a wildlife trek – we had stopped near the little town of Salen to watch harbour porpoises in the Sound of Mull.  Intrigued as I was by the ruined chapel and its surrounding burial ground, there wasn’t time to stop and explore and I had to return a few days later to get a good look around the site.  My stay on the beautiful Scottish island of Mull had been blessed with warm sunshine, but on the final day of my trip – when I finally had time to visit the chapel and the burial ground surrounding it – the clouds had arrived.

This is Pennygown burial ground, and it is still used by the people of the Mull today.

Mull previously had a larger population than it does today – like many areas in the Scottish Highlands and Islands, it was depopulated in the 19th Century, a time known as the Clearances.  People who lived off the land were evicted by landowners, who saw sheep farming as a more profitable use of their land. These displaced people went to work in cities such as Glasgow, or travelled across the Atlantic to start a new life in America or Canada.

Pennygown has been used as a burial ground for many centuries.  Very little is known about it; we do not know when burials began here, or exactly when the chapel was built, or when it fell into ruin.  The modern sections of the cemetery are more orderly, the graves arranged in neat rows, contrasting with the haphazard layout of the ancient heart of the burial ground.

The older part of the burial ground can be accessed by steps built into the wall. 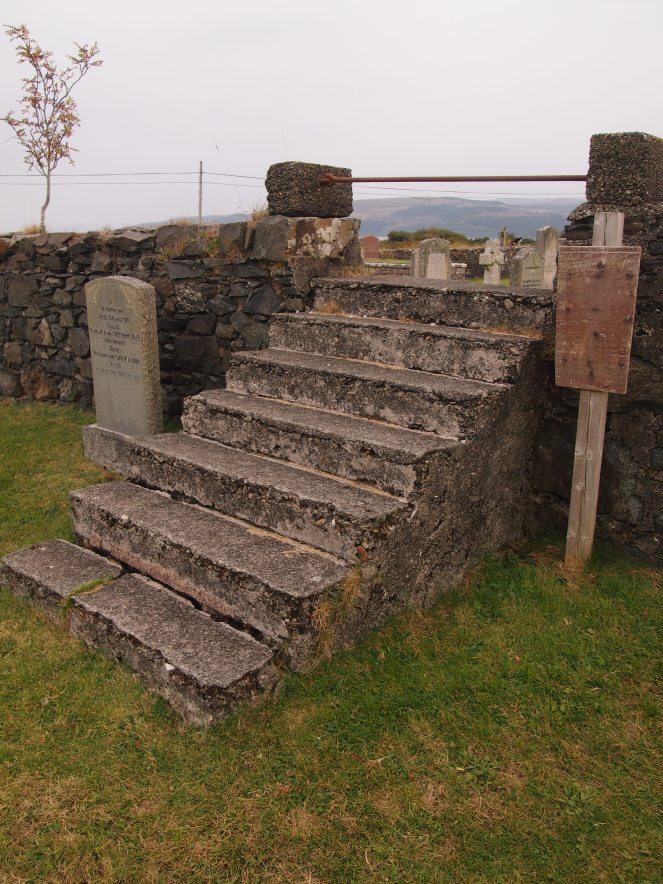 Local legends tell that Pennygown was an area known to be inhabited by fairies.  The fairies were said to be friendly and would grant wishes to visitors.  However, when a local left a piece of wood at Pennygown with the wish that the fairies would turn it into a ship’s mast, the fairies were offended and never granted wishes again.  There is also dark tale associated with Pennygown, which centres on some of the oldest gravestones on the site – the medieval effigies of a knight and a lady.

Now worn by time and the elements, these effigies would once have been the most distinctive memorials in the burial ground.  It’s possible – even probable – that these effigies are of family members of the lords of nearby Duart Castle, which was the seat of the powerful MacLean clan during the medieval period.  This would make sense, as effigy tombs and gravestones were only ever commissioned for the rich and powerful – they would have been far beyond the means of the ordinary inhabitants of Mull.

The dark tale attached to these effigies is vague but sinister.  A legend says that the two people the effigies depict were involved in witchcraft, and that their evil deeds meant that when they died, they were not permitted to be buried within the chapel and were instead buried in unconsecrated ground outside of it.  Certainly some MacLean chiefs committed some terrible crimes – one, when his wife was unable to provide him with an heir, left her stranded on an island that would be submerged at high tide, which would cause her to be drowned.  Luckily for the wife, she was rescued and her husband was later murdered.  Another MacLean chief, in a scene that wouldn’t have looked too out of place on Game of Thrones, massacred guests at his widowed mother’s wedding celebrations and tortured his new stepfather.

However, the link between the more unsavoury members of the MacLean clan and the effigies at Pennygown is unproven and rather unlikely.  The effigies are located close to the chapel – a prime spot in the graveyard.  It is unlikely that disgraced individuals, however powerful, would be permitted to be buried in such a place.

Even if there is no truth in the stories attached to these effigies, they are still rather special artefacts.  Unlike the impressive effigies of Iona, they are still in their original locations.  Because of this, they are worn and covered in moss and lichen, but perhaps – like many effigy graves found in churches – when they were first created they were painted in bright colours.  They would have been a bold indicator of the power and status of the individuals they commemorated, and even today the sight of the worn stone figures inevitably leads those who come across them to wonder about the people who rest beneath.

Fittingly, the war grave at Pennygown is situated close to that of the knight effigy – two warriors, who died centuries apart.  Sergeant Major Archie MacLean, a cavalryman who lost his life during the First World War, may even be a distant relative of the man whose grave is marked by the knight effigy, if he was a part of the MacLean clan. 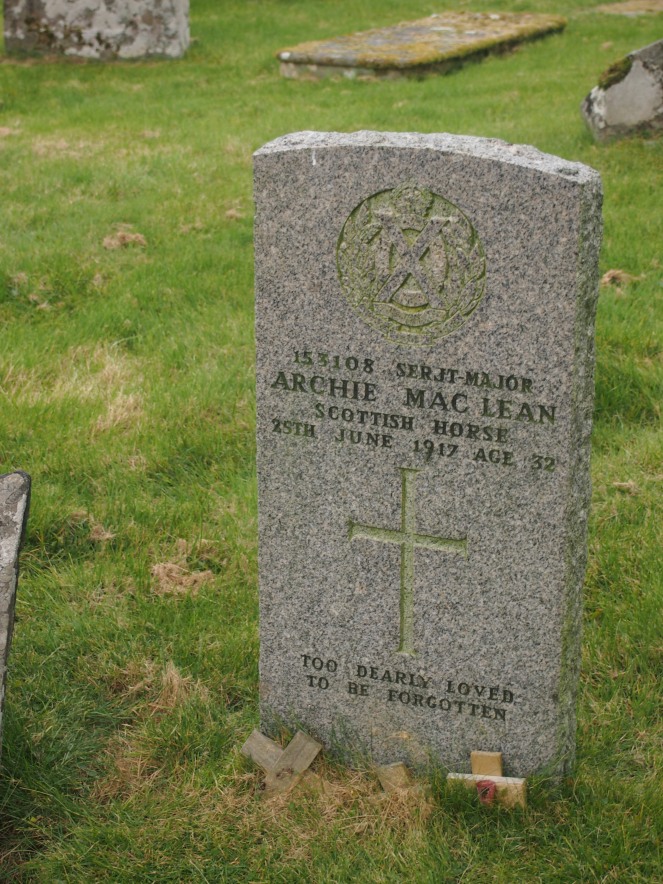 The chapel is thought to have been built in the early 13th Century, around the time that other, similar chapels were built in other parts of Mull.  It’s not known how long the chapel has been a ruin – perhaps it was abandoned after the Reformation (Mull’s parishes were merged into one large parish at this time), or fell into disuse as the local population moved to other parts of the island.  Although the roof is long gone, the walls are thick and sturdy. 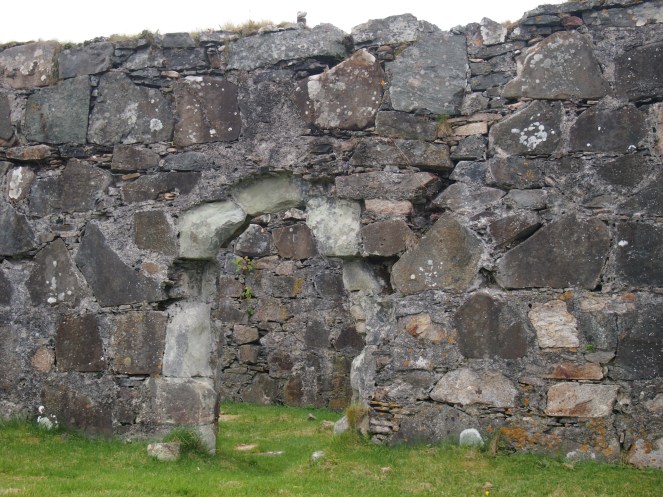 On the grass floor of the chapel are a number of old slabs – quite possibly grave markers – that are old and worn and have no visible inscriptions.  And standing in pride of place is a fragment of an old stone cross, decorated with rich carvings.

This stone cross is thought to date from the 16th Century.  Originally, it would have stood outside the chapel, but at some point it was moved to its current location inside the chapel.  The cross is missing its top section, but the surviving part is covered in beautiful carvings that can still be clearly seen today.  On one side, there is a ship at the base very similar to those found on other gravestones in the Hebrides, such as those at Rèilig Odhrain on Iona.  Above it rich foliage is carved. 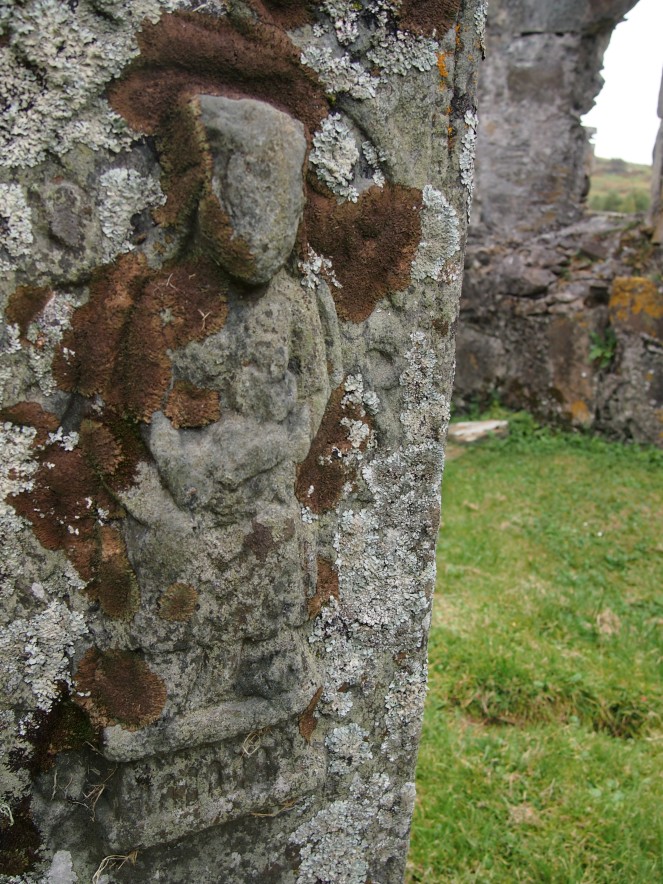 The most prominent carving on the other side of the stone cross is the Madonna and child, pictured above.

Despite being close to what, on Mull, counts as a main road, the burial ground is tranquil. Occasionally cars go past, mostly traffic coming to and from the ferry terminal at Craignure.  As I moved slowly through the burial ground, a chatty robin shadowed my steps, while further away the more threatening shapes of a raven and a buzzard loomed.

Many generations of Mull’s inhabitants are buried here, and the same family names crop up again and again – MacDonald, MacLean, Cameron, MacNeill, MacGilveray.  In the case of some families, it looks as though several generations all rest in this burial ground.

Backing up the claim on Donald McPhail’s headstone, there are many other memorials to McPhails in the burial ground. 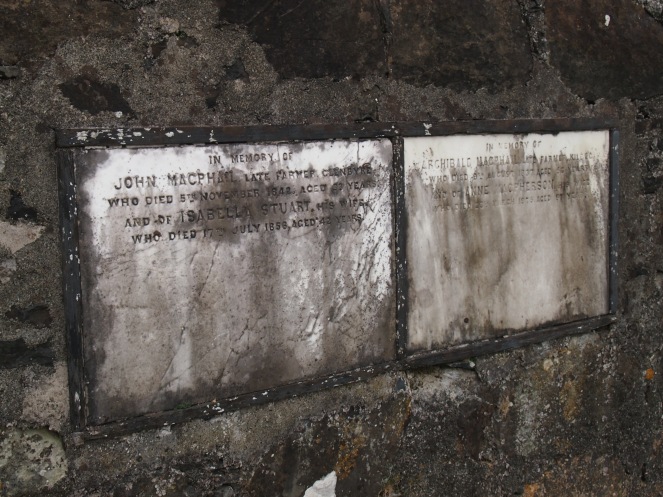 One thing I also noticed in the burial ground on Iona was that when married women are buried, their maiden names are often recorded on the graves.  In Scotland, there is a tradition of women still being known by their maiden name after marriage, unlike the tradition in England where a woman usually takes her husband’s name upon marriage, and is buried with her married name rather than her maiden name. 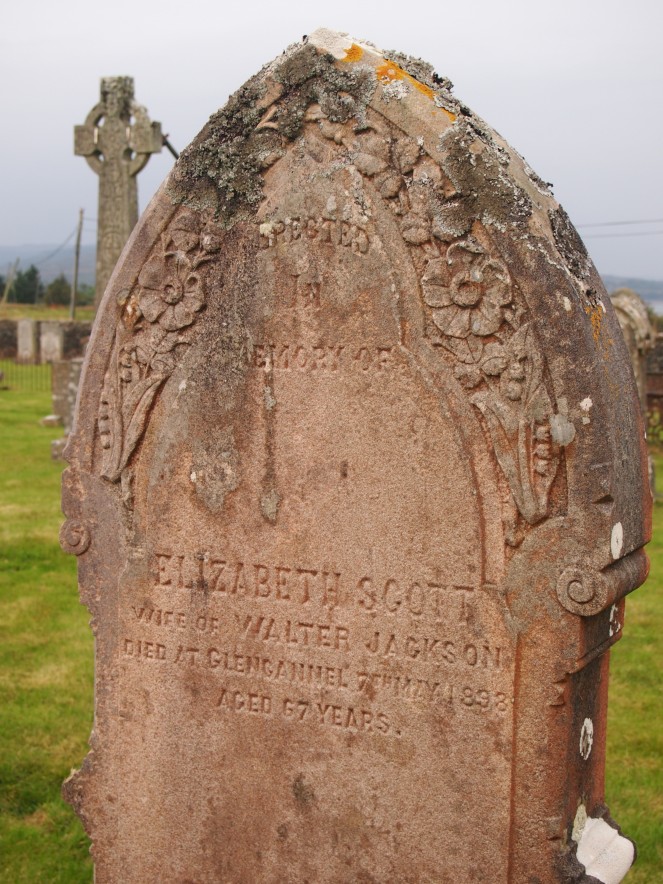 Many of the gravestones also indicated a strong sense of family pride.  Many headstones, even small ones, were decorated with coats of arms. 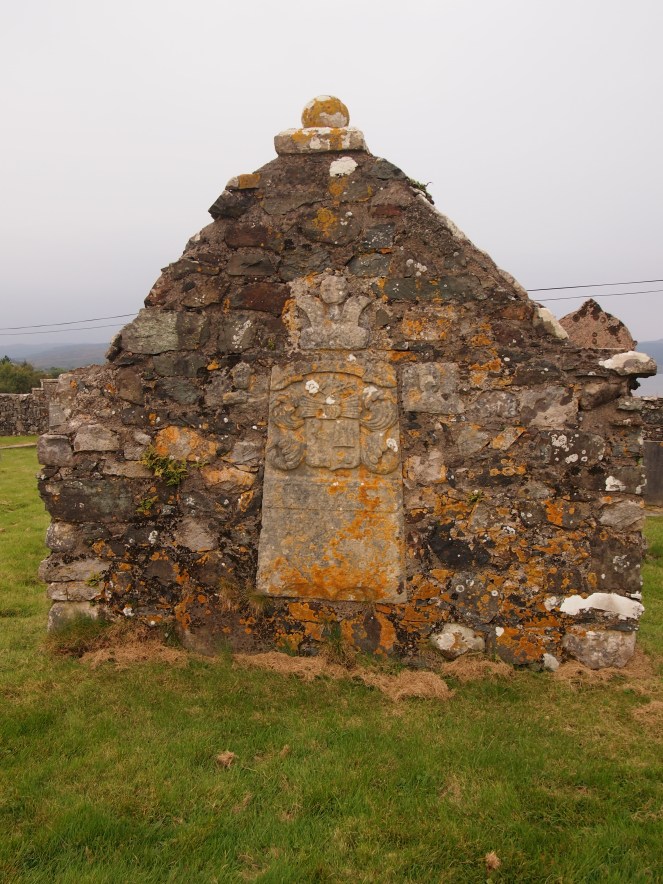 Tall stone obelisks and crosses dating from the 19th and 20th Centuries cluster in part of the cemetery, some of them supported by poles to prevent them toppling in high winds or due to the natural shifting of the ground.  Many of the stone crosses are similar in design to the beautiful medieval stone crosses on Iona.  During the 19th Century, it became popular to use crosses as grave markers – previously, the symbol had been thought of as too Catholic to be suitable for Protestants.  It was also around this time that Iona Abbey began to be restored, increasing interest in the beautiful old crosses situated there.

I’m so glad that I had the chance to spend time exploring this beautiful old graveyard. The lack of sources about its history gives it a real air of mystery, and the many beautiful and fascinating graves give an insight into how the families of Mull (at least, those who could afford such headstones) wished to commemorate their loved ones.

Pennygown burial ground isn’t labelled on Google Maps, but it’s visible from the main road from Craignure to Tobermory, and is situated near Glenforsa.

23 thoughts on “Pennygown: the ruined chapel and medieval effigies of a Hebridean burial ground”