The term “hidden gem” gets bandied around a lot in relation to all sorts of places in London – bars and restaurants, museums, galleries and historic buildings.  It’s a bit of an overworn phrase, but the subject of today’s post definitely fits the criteria for a hidden gem: small and off the beaten track, pretty and perfectly formed.

Through a little gateway on Fleet Street lies the Temple, the inner sanctum of Britain’s legal profession.  It’s a curious name – one that always intrigued me when I was younger, going through Temple Station whilst on the District Line and wondering if there actually was a temple there.  There is no temple, but amid the chambers of barristers is a little old church that has a history going all the way back to the Knights Templar.

I visited Temple Church one gloomy winter lunchtime, heading down through the familiar bustle of Fleet Street and then venturing for the first time into the Temple area.  As soon as I stepped off Fleet Street, the noise and the crowds disappeared.  Not many people pass through this place unless they work here or have business with one of the many legal professionals based in the buildings huddled around the little courtyards.  Some parts of the Inner Temple are even off limits to the public.  Temple Church, however, is open to all and hosts lectures and organ recitals as well as regular services.  I handed over the £5 entry fee and began to explore this extraordinary building.

Mention the Knights Templar and all sorts of images are conjured up: their Crusades, their distinctive white tunics emblazoned with a red cross, their wealth, and their sudden downfall and persecution after 1307.  The story of the Templars and their dramatic fall from grace has also become enmeshed with various conspiracy theories, many of them relating to groups such as the freemasons, or links them with legendary artefacts such as the Holy Grail.

Little reminders of Temple Church’s founders can be spotted all over the church.

The church is an unusual structure, dominated by the round nave that was is inspired by the architecture of one of the holiest sites in Christianity, Jerusalem’s Church of the Holy Sepulchre.   Members of the Knights Templar who had visited the order’s headquarters in Jerusalem would certainly have visited this venerated place.

Work on the London headquarters of the Knights Templar began in the 1160s, after their previous accomodation in Holborn became too small.  In 1185, the newly-built church was consecrated by Heraclius, Patriarch of Jerusalem, during a lavish ceremony that is thought to have been attended by King Henry II. 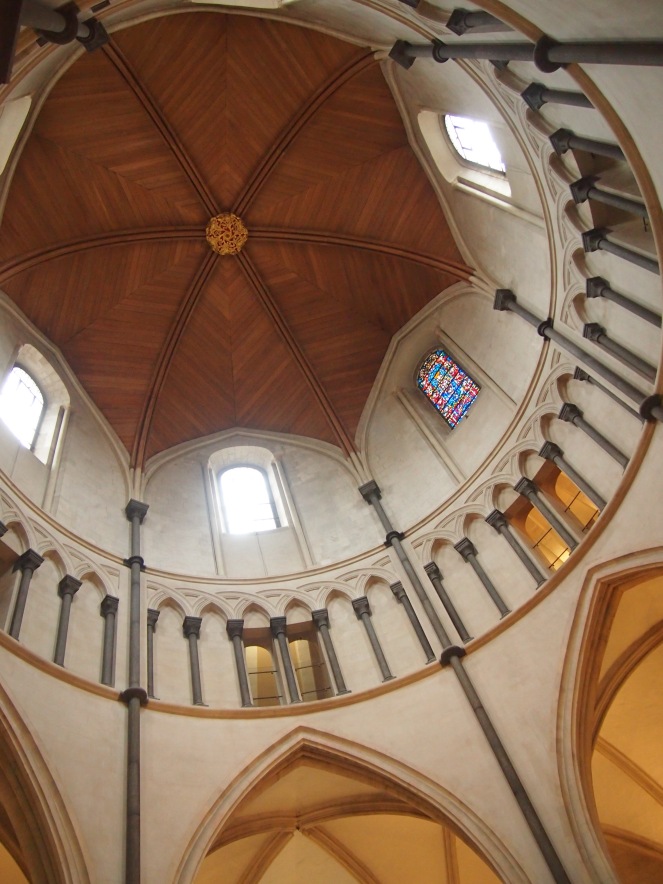 By the late 12th Century, the solid round arches that were characteristic of earlier Norman architecture were falling out of fashion, with the graceful pointed arches seen all over Temple Church becoming more popular.  This was the first step in the evolution from Romanesque to Gothic architecture.  The round nave is supported by black columns made out of Purbeck marble – at the time, they were the first free-standing columns to be constructed out of Purbeck marble, a material which is found in many churches and cathedrals in England.

The nave is watched over by a succession of grotesque faces, carved in stone and probably originally brightly coloured.  These often amusing faces are a well-known and well-loved feature of the church – each one is different, and plenty of visitors (myself included) took the time to go around the nave looking at each one. 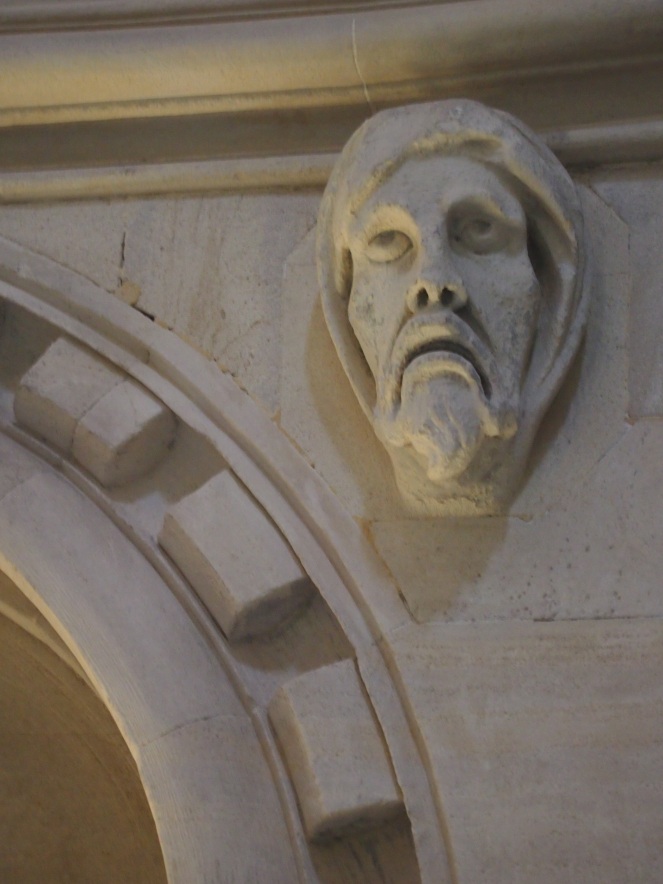 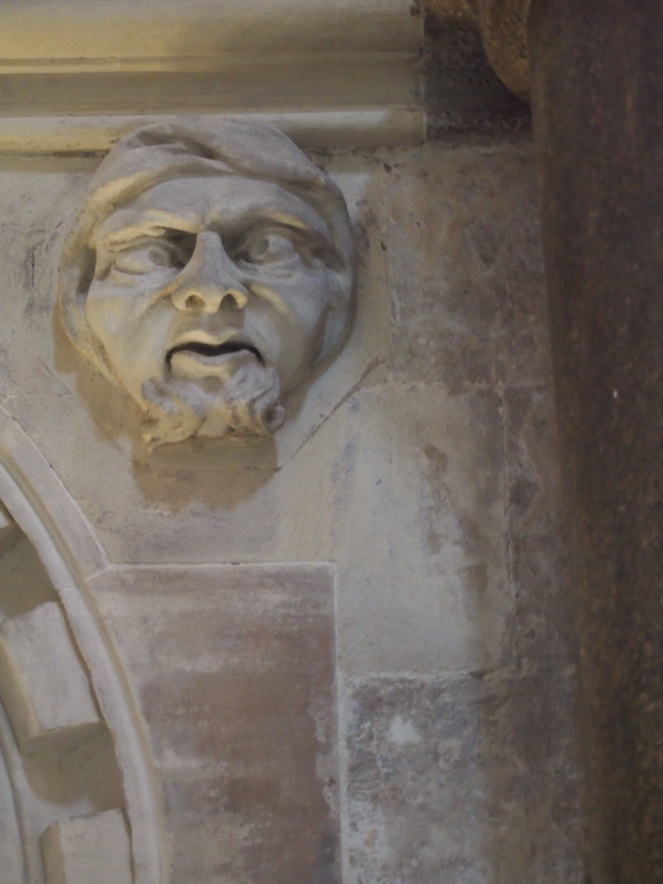 The grotesques are not the only stone faces to be found in the nave – a number of stone effigies of knights also reside there.  Probably the most famous figure depicted is that of William Marshal, who was described as the “best knight that ever lived.”  Marshal rose from humble beginnings to being one of the most powerful men in the country, acting as regent when Richard I was abroad on crusade and for Henry III when the king was still a minor.  He was also involved in the strife between King John and the barons that resulted in the king signing the Magna Carta.  Noted for his loyalty to the kings he served, Marshal ended his long life as the Earl of Pembroke and was buried at Temple Church.  Two of his sons, and their corresponding effigies, rest alongside him. 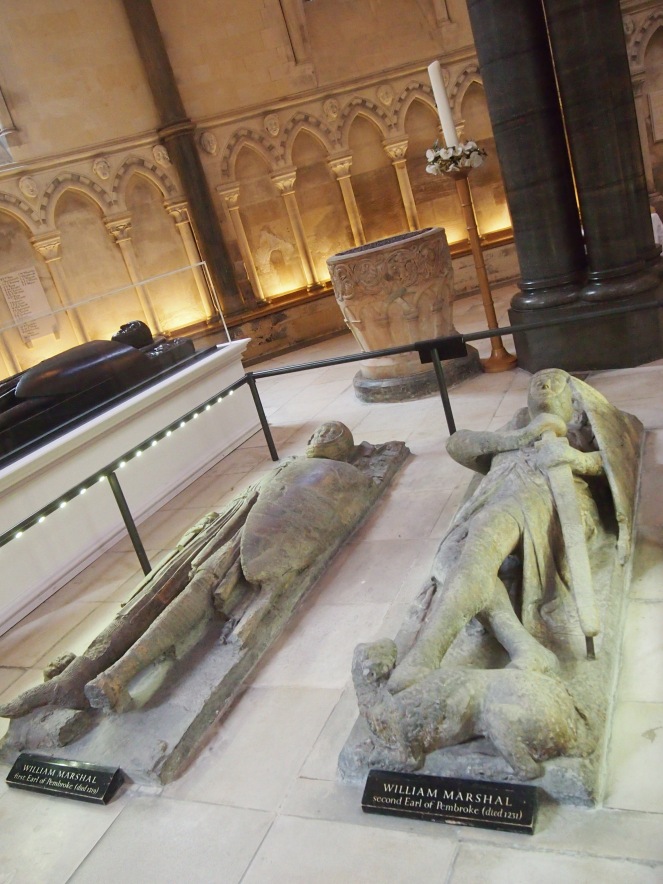 The effigy in the glass case pictured to the left of William Marshal in the photograph above is a 19th Century replica of one of the original medieval effigies in the church.  Four of these replicas, on loan from the Victoria and Albert museum, were on display when I visited.  The creation of these replicas later proved to be invaluable, as the stone effigies were damaged during the Second World War.  The replicas acted as guides to ensure that the effigies were restored to their previous appearance.

In the mid-13th Century the chancel of the church was rebuilt – Henry III himself planned to be buried in this newer part of the church, which was consecrated in 1240.  However, in the end Henry was laid to rest at Westminster Abbey, although one of his infant sons was buried at Temple Church. 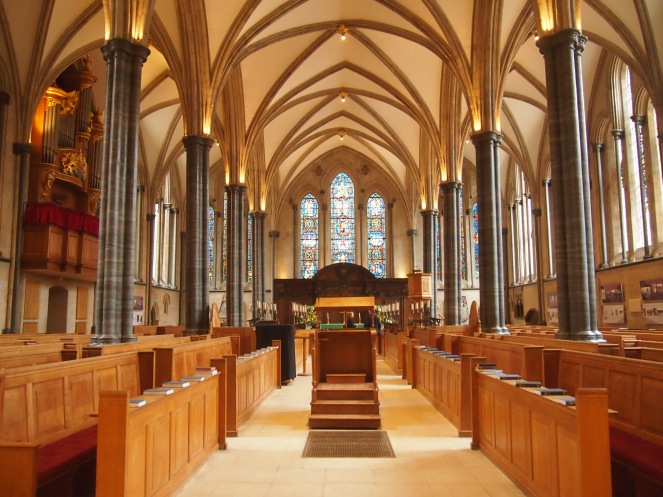 After the demise of the Knights Templar in the early 14th Century, Temple Church became a Crown possession.  After that, it was used by the Knights Hospitaller, who rented the church to two colleges of lawyers, the forerunners to the Inns of Court that became the Inner Temple and Middle Temple.  After the Reformation, the church continued to be used by members of the legal profession but the Knights Hospitaller were dissolved and their assets, including Temple Church, returned to the Crown.  It wasn’t until 1608 that the church was granted to the Inner Temple and Middle Temple in perpetuity.  The church escaped the flames of the Great Fire of London in 1666.

An 1878 account of Temple Church and its history describes how, in the late 17th Century, various additions were made to the interior of the building.  These additions included wooden panelling on the walls, new wooden pews, screens which divided up the space in the church and a new altar piece, all in a Classical style that didn’t really fit in with the graceful Gothic arches.  These changes were, by the 19th Century, looked upon rather scathingly and the 1878 entry on Temple Church in Old and New London describes how they were removed in an attempt to restore the church to its medieval appearance.

Old and New London states that “the restoration of this beautiful relic was one of the first symptoms of the modern Gothic revival.”  Some restoration had been carried out in the 1820s, but the work really began about twenty years later.  Two architects, Sydney Smirke and Decimus Burton, were in charge of the project and removed the unsympathetic 17th Century additions, as well as restoring the building’s structure and adding brightly painted wall murals inspired by pre-Reformation church paintings.  Many old coffins were found in the round nave during the restoration – they were reinterred in the centre of the church.

The Second World War brought damage and destruction to Temple Church.  Air raid damage in 1941 destroyed much of the restoration work that had been done exactly a century earlier, including the many colourful wall paintings.  Incendiary bombs destroyed the roof of the round nave and the heat of the blaze cracked the black Purbeck marble columns.

The picture above, by war artist Norma Bull, shows some of the church’s effigies in the aftermath of a damaging air raid.  After the war was over, a comprehensive scheme to repair and restore the church began.  This restoration took ten years to complete, and the church was rededicated in 1958.  In keeping with the tastes of the period, the lost Victorian wall paintings were not reinstated.  A number of fittings designed by Sir Christopher Wren, which had been removed during the 1841 restoration, were returned to the church.

Today, the restored Temple Church almost feels modern, despite the 12th and 13th Century stonework.  The walls are clean and unadorned, allowing the graceful arches to take precedence.

The upstairs space of the nave, accessed by a spiral staircase, is now used as an exhibition space.

Temple Church, hidden away in the Temple district, often gets overlooked, despite its proximity to the more famous churches of St Paul’s Cathedral and St Bride’s.  It’s a true gem of a church, pretty and welcoming, with a fascinating history.  I was particularly fond of the carved grotesque faces, which had a sense of fun often missing in churches.  The wonderful effigy graves were also a real treat – rare medieval survivors in a part of London that was mostly consumed by the Great Fire of 1666.

If there are any drawbacks at all, it is that Temple Church is generally not open to the public at the weekends, or during the summer months.  It’s definitely worth checking their website in advance if you’re thinking of visiting.  As well as the general opening times and regular services, many organ and choral recitals are held at Temple Church, as well as lectures and other special events.  It’s a wonderful building, a peaceful haven in the bustle of central London, and it’s well worth a visit. 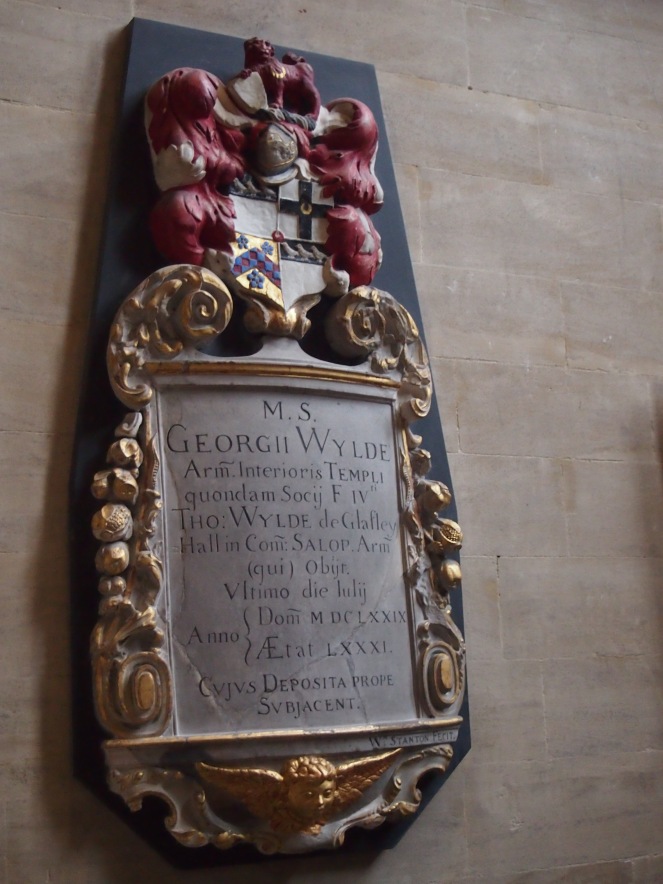 38 thoughts on “Temple Church: the hidden church founded by the Knights Templar”