I remember the first time I saw Christ Church Greyfriars – I was on my way to a job interview near the Old Bailey, and as I was walking up Newgate Street from the tube station by St Paul’s I saw the ruins of a church.  Intrigued, I went over to the ruin to read the sign explaining what the site was.  I’ve always been fascinated by ruins – not just the reasons why a building became a ruin, but also why the ruin itself was preserved.  When one considers how valuable every square foot of space is in the City of London, it’s quite something to come across a ruin that’s stood there for over seventy years.

The church got its name from the Franciscan friars, who wore a grey habit, who had a monastery on the site from the 13th Century.  An impressive new church was built at Greyfriars in the early 14th Century, partly funded by the Queen Margaret, second wife of Edward I.  This church was the second-largest in London, considerably larger than the later Christopher Wren church.  One of the Franciscan monastery’s benefactors was Lord Mayor Richard Whittington, who founded the church’s library in 1429.

The medieval incarnation of Christ Church Greyfriars was associated with a number of queens of England.  Margaret of France, one of the church’s original benefactors, was buried there, as was the heart of Eleanor of Provence, consort of Henry III.

One of the most notorious of England’s medieval queens was laid to rest at Christ Church Greyfriars after a dramatic and eventful life that still generates a large amount of interest and debate today.  Isabella of France, daughter of the French King Philip IV, arrived in England as a girl of twelve to be married to King Edward II.  Edward was notorious for the prestige and favour he bestowed on his male “favourites”, the first of whom was Piers Gaveston, who was later murdered due to the influence he had with the king.

The reign of Edward II was extremely troubled, with problems both at home and abroad weakening the king’s position.  Edward was regularly in conflict with his barons, who disliked the preferential treatment he gave his favourites, and the disastrous English defeat at Bannockburn in 1314 had cleared the way for Scottish forces to regularly raid the north of England.

Edward’s close association with Hugh Despenser and his family eventually resulted in his downfall.  Civil war broke out, with the king and the Despensers on one side and the barons, led by Thomas of Lancaster, on the other.  Isabella’s children were taken from her and placed in the custody of the Despensers, and her lands were confiscated and given to the Despensers.  These events, which must have been humiliating and upsetting for the Queen, go a long way towards explaining Isabella’s later actions against her husband.

Meanwhile, the king of France, Charles IV – Isabella’s brother – seized English possessions in France and demanded that Edward, who as well as being King of England was Duke of Aquitaine, come to France to pay homage to him.  With the situation at home still chaotic, the king chose to send his wife and son (also called Edward) to France in his place.

While in France, Isabella gathered her husband’s enemies around her and began to plot against him.  With her lover, Roger Mortimer, she assembled an invasion force that landed in England in September 1326 and quickly seized control of the country.  Edward II was deposed and imprisoned, and his son was proclaimed King Edward III.  As the younger Edward was still a minor, Isabella was his regent, and Mortimer became the most powerful man in the country. Edward II apparently met a gruesome end, supposedly involving a red-hot poker, in 1327.

Isabella and Mortimer acquired huge amounts of wealth during the time they acted as regents for Edward III, and this may have contributed to the eventual disintegration of their regency, as it did not make them popular.  The young King disliked Mortimer, and in 1330, when he was seventeen years old, he overthrew Mortimer in a coup, later having his mother’s lover executed for treason.  Isabella was imprisoned for a time, but was later released to live out her retirement away from the royal court. Despite her banishment from court, Isabella continued to maintain a lavish lifestyle.

Another controversial woman was also buried at Christ Church.  Elizabeth Barton, sometimes known as the “Mad Maid of Kent”, was hanged in 1534 after making prophecies about the marriage between Henry VIII and Anne Boleyn.  The visions she claimed to have attracted a following of thousands – but in 1528 she attracted the attention of Cardinal Wolsey, who introduced her to Henry VIII.  At this time, her predictions were not seen as dangerous as they did not challenge Henry or his decisions, but when Henry began the process of ending his marriage of Catherine of Aragon – which would eventually kickstart the Reformation – Elizabeth began to prophesise against Henry’s actions, claiming that if he remarried, he would soon die.

Elizabeth was still very popular, and at first she suffered no consequences for prophesying against Henry.  But agents of the king began to spread malicious rumours about Elizabeth, attacking her pious reputation by claiming that she had had sexual relationships with priests.  With her reputation damaged, it was easier for Henry’s agents to build a case against her.

Elizabeth confessed to falsifying the prophecies about Henry’s marriage – whether she freely confessed, or was forced to admit her guilt through coercion or torture, we will never know.  What is certain is that, along with some of her supporters, she was hanged on 20th April 1534 at Tyburn; her head was then displayed on a spike over London Bridge.

However, her burial at Christ Church suggests that she still had supporters.  Why else would a convicted traitor be laid to rest in such a large, prestigious church – the burial place of queens, no less?

The former monastery buildings were used for a school – Christ’s Hospital, founded by Edward VI in 1552, and still in existence today.  Until the school relocated to West Sussex in 1902, the Christ’s Hospital schoolboys were a familiar sight in the pews at Christ Church for Sunday services.

Along with a large swathe of the City, Christ Church was destroyed in the Great Fire of 1666.  The huge Gothic church was almost totally destroyed, and at first, there was debate over exactly what form its replacement should take.  The new church, designed by Christopher Wren, was eventually completed in 1687.  It was considerably smaller than its medieval predecessor.

Christ Church quickly became a centre for music in the City, attracting crowds for recitals – performers at the church included Felix Mendelssohn and Samuel Wesley.

Christ Church was one of eight Wren churches that burned on one of the most ferocious nights of the Blitz, 29th December 1940.  Known as the “Second Great Fire of London”, large swathes of the City were destroyed by the Luftwaffe’s bombs – a larger area, in fact, than had been destroyed by the Great Fire of London in 1666.  As well as Christ Church Greyfriars and other churches, the medieval Great Hall of the Guildhall was gutted, and many of the City’s historic livery halls were also destroyed.  The publishing hub of Paternoster Row was obliterated, with the loss of millions of books. Famously, though, St Paul’s Cathedral was saved by the brave efforts of firefighters and provided the iconic photograph of St Pauls surrounded by smoke and ruins.

Only one item is known to have been saved from Christ Church Greyfriars – an ornate wooden font cover which was bravely rescued by an unknown person as the church burned.  The font cover now resides at the nearby St Sepulchre-without-Newgate.  It is a beautiful thing – dating from the late 17th Century, the high quality carvings have stood the test of time well.

The firebombing of Christ Church left the building a blackened, empty shell – but the walls and tower were still standing.  In order to restore its structural integrity, the tower was carefully rebuilt and the whole ruin was designated as a Grade I listed building in 1950.  However, this did not prevent the removal of the east wall of the church when King Edward Street was widened in the 1970s.  A low concrete barrier now marks where that wall once stood, but that part of Wren’s building is now lost.

A garden was laid out in the ruined nave of the church, with wooden frames for climbing roses installed where columns had once stood in the building.  The 18th Century vestry house, which perished in the 1940 fire, has been rebuilt and how houses a dental surgery. The tower was eventually converted into a private residence – surely one of London’s most unusual homes. 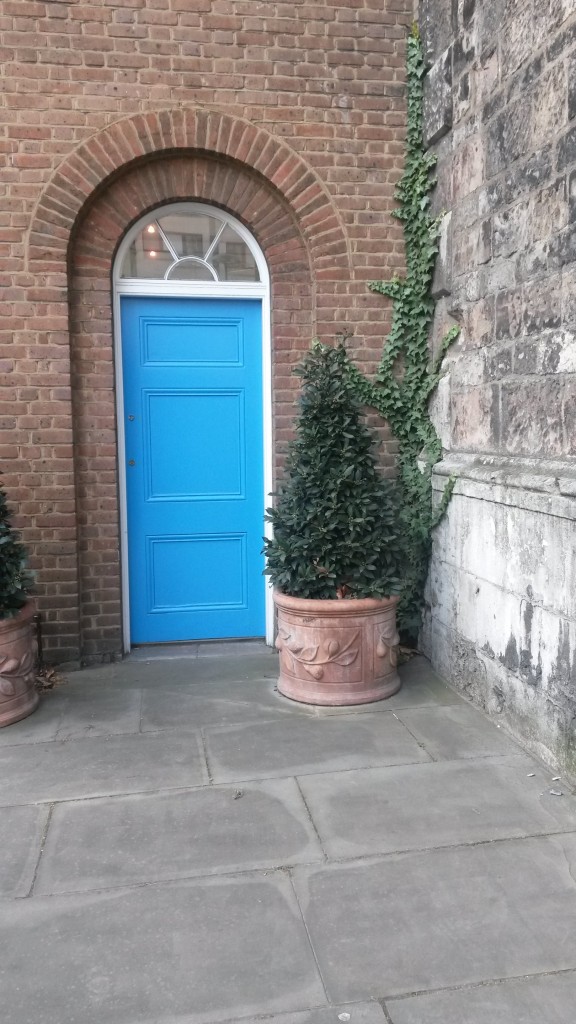 So what does the future hold for Christ Church Greyfriars?  Whilst researching this post, I came across a campaign to reinstate the demolished east wall of the church and turn it into a memorial for Britain’s civilian victims of World War II.  As one of the few tangible reminders of the war’s destruction still visible in London, Christ Church seems like an ideal site for such a memorial and its proximity to St Paul’s would surely guarantee it a good number of visitors.

Today, the garden at Christ Church Greyfriars is a popular spot for tourists and office workers alike to sit on pleasant days and enjoy lunch.  The initial mystery of the ruin is what must often draw people to the site; the attractive planting and the benches make it a place to stay and enjoy.  For me, along with the nearby Postman’s Park it was something of a haven during my first year living in London, when I often sought out peaceful spots amid the madness of the City. 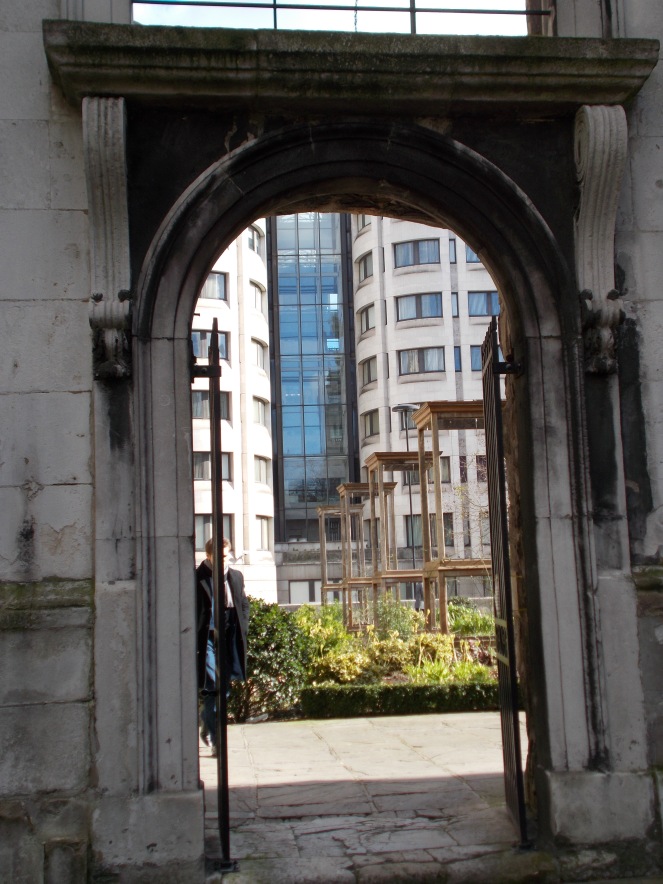 Thank you to Ian Heron for allowing me to reproduce images from his Citizens’ Memorial site.