Last summer, I visited a part of my native Lancashire that I’d never been to before – the Lune Valley.  It’s a beautiful part of the world which probably gets overlooked due to its proximity to the famous, dramatic landscapes of the Lake District and the Yorkshire Dales.  The valley is probably most famous for Ruskin’s View, the stunning vista – immortalised by John Constable – that can be observed from Kirkby Lonsdale (just across the county border in Cumbria).  But the Lune Valley also has a fascinating, half-forgotten history, and is home to some wonderful old churches.

This trip was one of the regular “adventures” that me and my Dad go on when I go back to Lancashire to visit my family.  Dad was the first person to encourage my interest in history – when I was small, we visited lots of old houses, Roman ruins and other historic sites, and we still enjoy looking for interesting places to visit.  On this occasion, we were drawn to the Lune Valley by the prospect of seeing kingfishers on the banks of the River Lune.  In the end, we didn’t see any kingfishers, but we did come across rather a lot of history.

Between the junction of the M6 motorway and Kirby Lonsdale are several small villages.  The first church we visited was a tiny little place, tucked away at the end of a lane.  St John the Baptist, Arkholme, was for a long time a chapel of ease, only becoming a parish church in the 19th Century.

This little church dates from around 1450, although the fabric of the building was significantly altered in later centuries.  The cross base pictured below is thought to be medieval.

At the time, I didn’t realise what the strange, clearly man-made mound rising steeply behind the church was.  My rather morbid imagination briefly wondered if it was some sort of pile of bones, centuries of charnel piled up and grassed over – although that seemed fanciful in such a tiny village.  In reality, this mound is a Norman motte, built soon after the Conquest of 1066.  Any traces of the bailey that would have surrounded it have been lost due to the development of the church and burial ground over the centuries, but in the early Norman period the motte would have been topped with a wooden castle and would have dominated the area.

As well as the motte, which was topped with a keep, the bailey of the castle might have contained other buildings which would have been protected by defensive ditches.  Many mottes have survived due to their substantial size – they can be found all over Britain – but unless more permanent stone structures were later built, baileys have often been lost after the castles fell out of use.  The wooden keeps do not survive, but modern reconstructions can give an idea of what they might have looked like.

The church of St Michael the Archangel, Whittington-in-Lonsdale, is located on another Norman motte a few miles down the road from Arkholme.  The square church tower dates from the early 16th Century, while the rest of the church building was extensively restored and remodelled in the 19th Century by the Lancaster-based architects Paley and Austin.

There are some interesting graves in the churchyard, the earliest one I found (attached to the wall of the church) dating from the 17th Century.

The steep sides of the motte must be challenging to maintain – when I visited, some graves could be seen peeking out of the long grass.  Digging graves on such a steep slope must have been quite an arduous task for the church’s gravedigger. 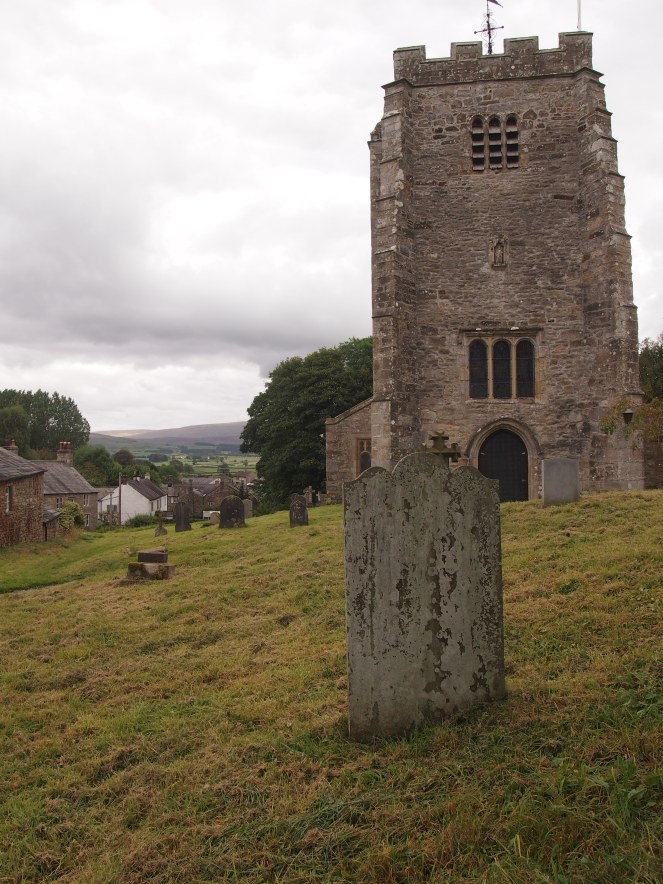 It’s at this point that we ought to ask the question – why are there so many Norman fortifications in the Lune Valley?  To look into this, we really need to consider the situation in the valley around the time of the Norman Conquest.

Before 1066, the local lord, whose considerable holdings centred on Whittington, was Earl Tostig, brother of King Harold Godwinson.  Tostig was Earl of Northumbria and was in addition lord of a large part of northern England.  He was not popular, and in 1065 he was deposed and exiled.  He joined forces with Harald Hardrada of Norway, and both perished at the Battle of Stamford Bridge in 1066.  King Harold Godwinson, of course, was killed at the Battle of Hastings a few weeks later and William of Normandy became King of England.

However, it took a long time before Norman rule was established over the whole of England, and in some areas the invaders encountered resistance.  Infamously, William’s response to uprisings in the North of England in 1069-70 became known as the “Harrying of the North.”  The Harrying has been described as William’s cruellest act – the campaign against the rebels and their Danish allies led to the deaths of thousands of people, and the destruction of crops, livestock and farmland led to a famine which cost even more lives.

In the Domesday Book of 1086, much of Amounderness (now the part of Lancashire north of the River Ribble), is described as “waste”.  Arkholme and Whittington are described as being “King’s land” – but there isn’t a section in the Domesday book that describes the area that is now modern-day Cumbria.  The map below shows the extent of William’s dominion by 1087, and Cumbria (labelled on the map as Cumberland and Westmorland) is not a part of this – making the settlements of the Lune Valley on the frontier of Norman England.

So far, we have visited two churches built close to Norman fortifications, but at last in Kirkby Lonsdale we have a church actually built by the Normans.  The origins of the Grade I listed St Mary’s, Kirkby Lonsdale, are given away by the distinctive Romanesque doorway at the base of the tower.

The elaborate carvings around the Romanesque doorway have become quite worn over the years – when it was freshly carved, this doorway must have been quite spectacular.

Over the centuries, the church has been extended and parts of it rebuilt, but inside, some Norman arches still remain.  Along with the motte and bailey castles, the stone churches that the Norman invaders build all over England were a prominent signifier of their power and dominance over the people of England.  We’ve already seen this in an earlier Flickering Lamps post on Ely Cathedral, but as well as building imposing cathedrals the Normans also rebuilt a great many parish churches in stone as well. 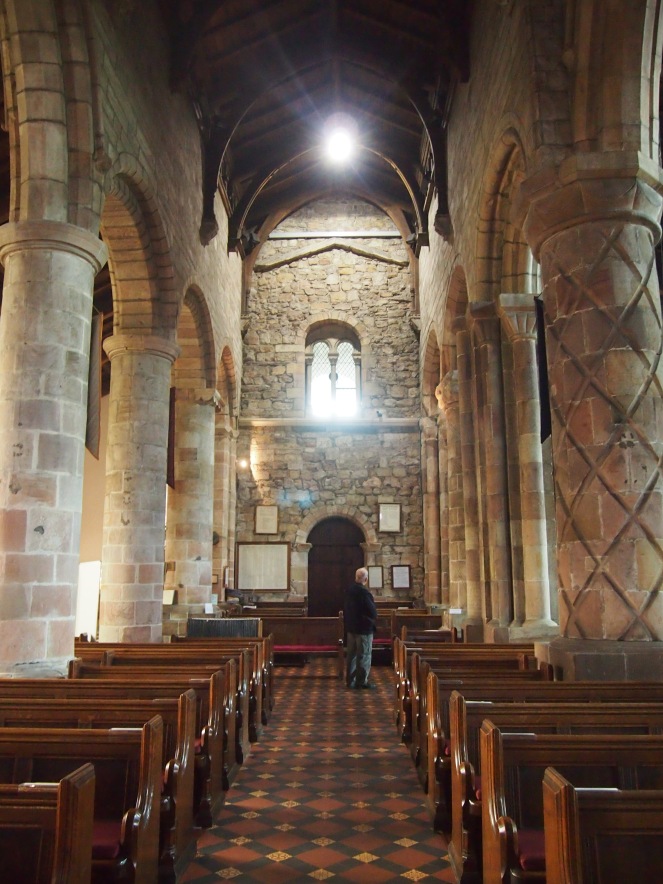 The age of this mysterious stone sarcophagus, situated by the wall of the church, is unknown.  The little green plaque next to it explains that it was “hewn by hand for a noble man.” 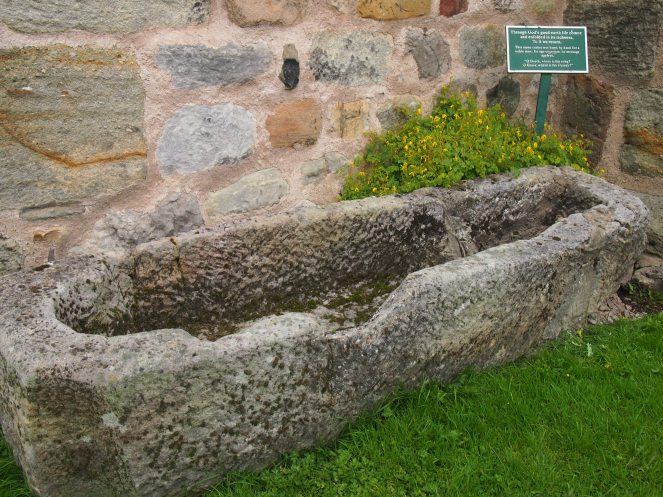 Visitors looking for Ruskin’s View have to walk through the churchyard of St Mary’s to reach the famous spot, and of course I couldn’t resist walking among the gravestones, looking at the designs and the inscriptions that mark the resting places of many of Kirkby Lonsdale’s people. 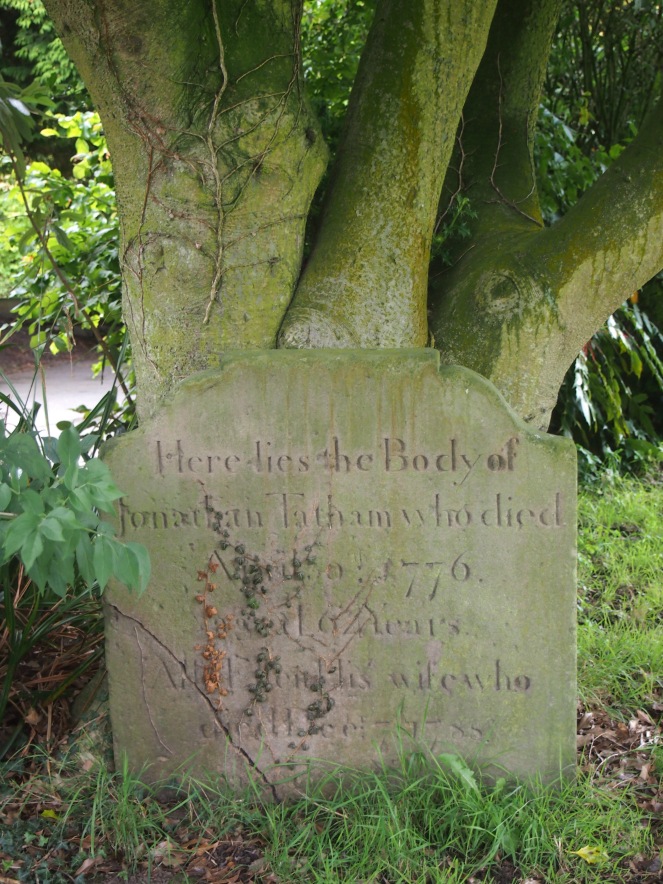 Another possible Norman motte, known locally as Cockpit Hill due to its later use as a cockfighting venue, is located close to both St Mary’s Church and Ruskin’s View.  I didn’t get any pictures of the remaining earthworks, but this blog post contains photographs of the motte from various angles.

Spending a day exploring the Lune Valley was absolutely fascinating – as well as encountering some lovely churches and graveyards, the numerous Norman fortifications (which I’ve only really learned more about since starting to research this post) make the valley an unusual place.  It’s hard to imagine what the valley must have been like when the motte and bailey castles were newly built – perhaps there were fewer trees, to give less cover to those opposing Norman rule.  It’s a period of the valley’s history that – in common with many other places in northern England – has been lost, with only the records of the Domesday Book providing a brief insight into the settlements that existed at the time.

So if you’re passing through the Lune Valley, keep an eye out for the distinctive earthworks of the Norman mottes.  They mark a forgotten frontier from a time when England was newly-invaded and still adjusing to the rule of the Normans.  Ruskin’s View and the Devil’s Bridge might be the famous local landmarks, but if you look a little more closely, there’s a huge amount of history to be found.

‘The parish of Lancaster (in Lonsdale hundred): Church, advowson and charities’, in A History of the County of Lancaster: Volume 8, ed. William Farrer and J Brownbill (London, 1914), pp. 22-33 http://www.british-history.ac.uk/vch/lancs/vol8/pp22-33