Among the smart suburban homes of Twickenham is a very strange house.  Gleaming white walls, battlements, Gothic pinnacles and a round tower stand out against more restrained neighbours. Strawberry Hill House, home of the eccentric man of letters Horace Walpole during the second half of the 18th Century, is arguably the birthplace not only of the Gothic revival, but also of the Gothic novel.   I visited Strawberry Hill on a very gloomy Saturday afternoon, which didn’t really do the house’s bright white walls justice, but the house had only reopened a few weeks earlier after an extensive restoration and despite the grey weather the house was clean and jewel-bright – and quite possibly one of the oddest homes I’ve ever visited.

When Horace Walpole bought the house on this site in 1749, it was a small 17th Century building of little distinction, known as Chopp’d Straw Hall.  Walpole, perhaps unsurprisingly, wasn’t too fond of this name and while searching through some old deed relating to the land he’d just purchased, he found the name “Strawberry Hill”, which he then adopted as the name for his new home.

Horace Walpole was a man ahead of his time.  Clever, creative and curious, he was fortunate enough to have a private income (his father, Sir Robert Walpole, had been Prime Minister and Earl of Orford), and as a lifelong bachelor had enough time on his hands to make his visions a reality.  From Strawberry Hill’s humble beginnings as Chopp’d Straw Hall, he transformed it – over a long period of time – into a unique space to showcase the many books and artefacts he collected throughout his life.  The Gothic style he chose to embrace at Strawberry Hill was not at all fashionable in the 18th Century, when grand homes tended to be constructed in the Palladian style – Walpole’s “Gothic Castle” was irregular, anachronistic and, unsurprisingly, the talk of the town.

Walpole’s fascination with the Gothic style of architecture stemmed from the grand tombs and cathedrals he encountered as a young man on a Grand Tour through Europe.  While many of the other priveliged young people of the time were inspired by the Greek and Roman buildings they saw on their Grand Tours, Walpole was taken in by the beauty and elegance of the medieval Gothic buildings of northern Europe.

Stepping into the hallway of Strawberry Hill, the visitor is plunged into the gloom of a space painted to resemble a tomb.  Walpole coined the phrase “gloomth” to describe the atmosphere in the old Gothic buildings that inspired his work at Strawberry Hill.

Most of the entrance hall was restored to its original appearance during the recent restoration of Strawberry Hill, which cost almost £9 million.  Fortunately for those restoring the entrance hall, fragments of the old wallpaper painted to look like the walls of a tomb survive – they are preserved today.  All of the wallpaper produced for Strawberry Hill during the restoration was manufactured with the same techniques and materials that would have been used during Walpole’s time – as a result, visitors are reminded not to touch or brush against the walls, as the painted wallpaper is far less robust than modern wall coverings.

Today, Strawberry Hill is a popular visitor attraction, and the situation was no different when Walpole lived there.  Visitors in the 18th Century were encouraged to apply for tickets, which admitted four adults (no children were permitted) to visit the grand rooms, usually accompanied by Walpole’s housekeeper rather than the man himself, who often retreated to a cottage in the grounds when visitors were present.

He did, however, produce an informative guidebook for visitors to Strawberry Hill.  In 1757 the Strawberry Hill Press was founded, and Walpole used this private press to publish not only his own work and that of his friends, but also to print the guide to his home.  This little book explained to visitors the contents of each room, and also acted as a souvenir.  His introduction to the guidebook began like this:

It will look, I fear, a little like arrogance in a private man to give a printed description of his villa and collection, in which almost everything is diminutive.  It is not, however, intended for public sale, and originally was meant only to assist those who should visit the place.

Today, visitors still receive a guidebook, which contains many of Walpole’s own words about Strawberry Hill, along with modern additions describing the building’s restoration and information about artefacts that are no longer housed at Strawberry Hill.

The first room encountered by visitors today is the refectory, or great parlour, one of the earliest spaces Walpole designed for receiving visitors.  It’s in the oldest part of the house, the building that was once Chopp’d Straw Hall, and in Walpole’s time it was used for entertaining. 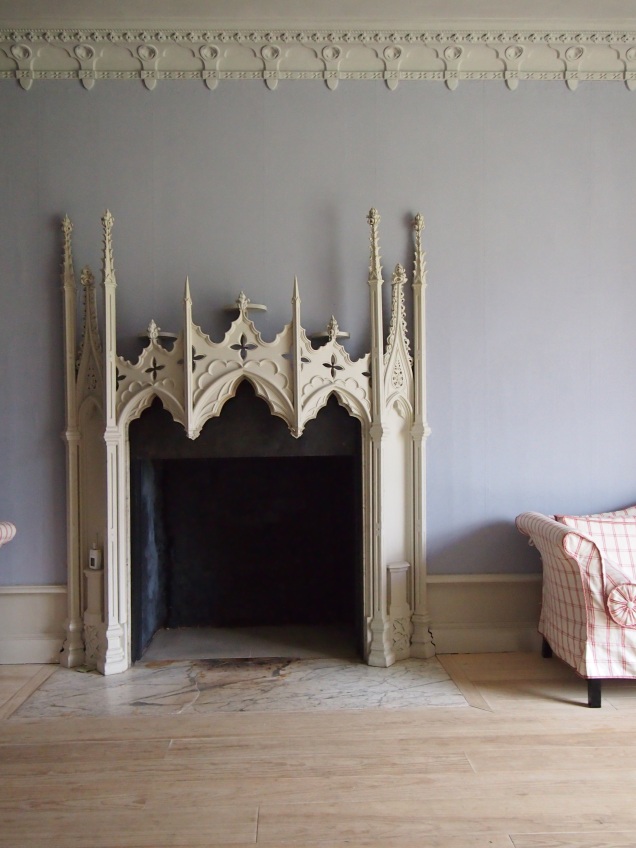 The furniture in the room consists of replicas of what would originally have been in there – the chairs are exact copies of ones designed by Walpole that now held by the Victoria and Albert Museum, and the sofas were carefully created by students at London Metropolitan University, inspired by sofas depicted in an 18th Century painting.

Walpole’s intention was not to create an accurate replica of a medieval Gothic building, but to create a building inspired by the structures and art he encountered.  He even incorporated fragments of old glass into the windows at Strawberry Hill – he describes the windows in the great parlour as having “some fine painted glass and one ridiculous Dutch piece representing the triumph of Fame.”  Dates are visible on some of the painted glass fragments – there are two examples pictured below from the 17th Century. 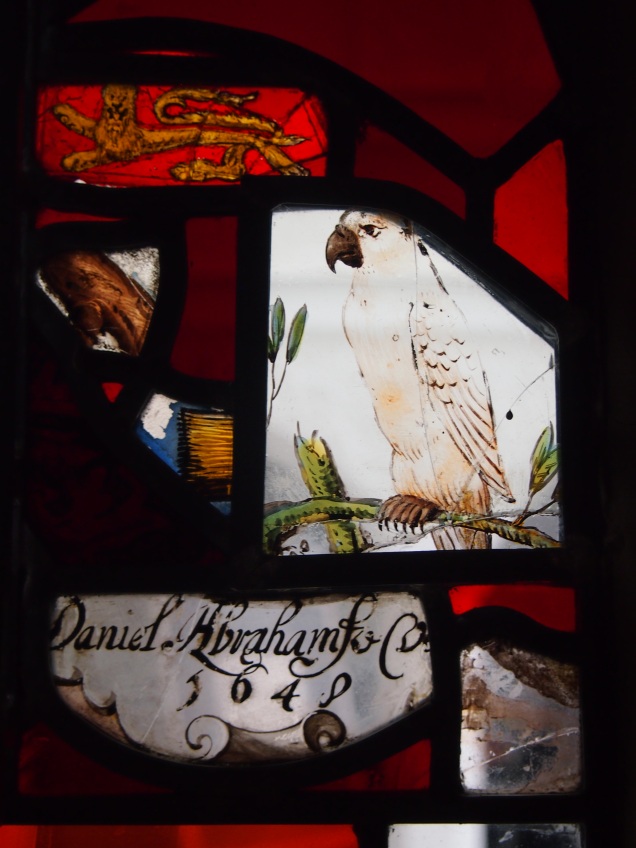 It was Strawberry Hill that provided Walpole with the inspiration for The Castle of Otranto, now recognised as the first Gothic novel.  He had dreamt of a giant armoured fist appearing on the staircase at Strawberry Hill, which inspired the opening scene of The Castle of Otranto, where a young prince is crushed by a falling helmet.  As the picture below shows, Walpole did actually keep some armour on display by the staircase.  The Castle of Otranto was to inspire the new literary genre of the Gothic novel, with authors such as Mary Shelley, Edgar Allan Poe and Bram Stoker among those whose work was influenced by Gothic themes.

It is only a few weeks since Walpole’s private rooms at Strawberry Hill opened to the public for the first time.  These rooms were never intended to be seen by visitors – they were used by Walpole for eating, sleeping and writing.

One of the wonderful features of the newly-restored Strawberry Hill is the wallpaper.  Carefully crafted by hand by Griffen Mill, the wallpaper is based on Walpole’s own designs and from fragments of original wallpaper that still survive in the house.  The wallpaper now seen in Mr Walpole’s bedchamber, pictured below, was preserved completely by accident in a cupboard in the room.  The survival of the original wallpaper meant that Griffen Mill could produce an exact reproduction that could be used to decorate the entire room. 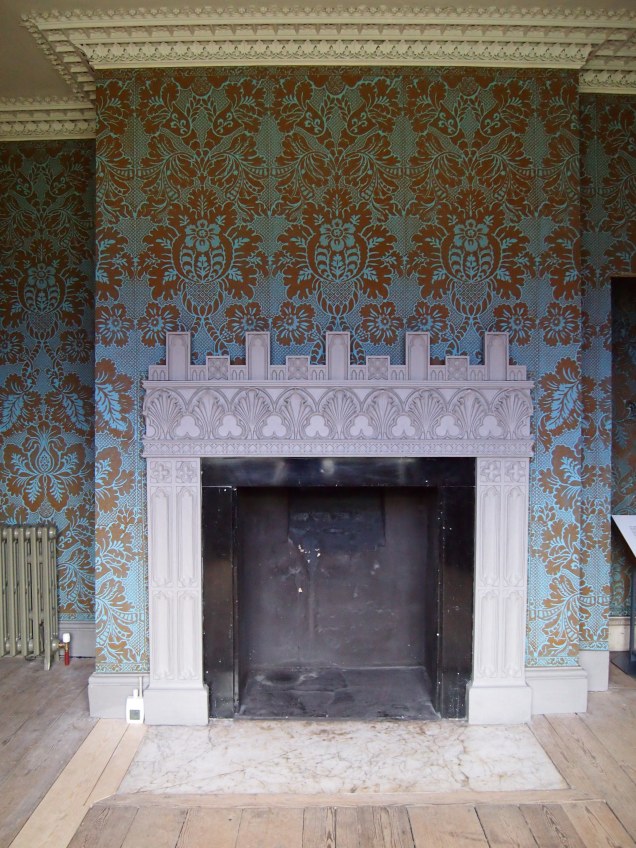 Probably my favourite room at Strawberry Hill is the wonderful library, with its ornate shelves and beautiful painted ceiling.

The sumptuous entertaining space of the Gallery is inspired by the fan vaulted ceilings of the chapel built by Henry VII at Westminster Abbey.  The amount of gold leaf used in this room shows how Walpole’s wealth had grown over his lifetime – the later rooms at Strawberry Hill are far more lavishly decorated than the earlier rooms.

The survival of so many of Strawberry Hill’s original features is thanks to Lady Waldegrave, who lived in the house in the 19th Century and was keen to preserve what Walpole had created there.  Of course, by the Victorian period the Gothic Revival was in full swing and the medieval-inspired designs first seen at Strawberry Hill had become a popular architectural style.  Like Walpole, Lady Waldegrave used Strawberry Hill for entertaining – she knew many important political figures of the day and her parties at Strawberry Hill were said to cause huge traffic jams of coaches coming from Twickenham Station.

Sadly, Lady Waldegrave’s husband sold Walpole’s vast collections (to pay off his large debts) in a Great Sale in 1842, which attracted a huge amount of international attention and caused the items that had been housed at Strawberry Hill to be dispersed all over the world.  Today, a large number of these items are held in America at the Lewis Walpole Library at Yale University, Connecticut.  Careful investigative work has helped to identify objects that were once on show at Strawberry Hill, and gradually some of Walpole’s possessions are being brought back to Strawberry Hill, or replicas of them commissioned.

The flamboyant style of Strawberry Hill certainly won’t be to everyone’s taste – although a common comment made by visitors today is how surprisingly modern a lot of the features of the house seem – but it’s an incredible, unique house that arguably had a great impact on architectural trends of the 19th Century.  Although the Gothic Revivial also had its roots in an increased interest in ecclesiastical architecture, Strawberry Hill was the first home to showcase Gothic designs built from scratch.  Like other early advocates of the Gothic Revivial, Walpole was fascinated by history and this interest was reflected in the huge array of objects, pictures and books that he collected and housed at Strawberry Hill.  This eccentric house, with so many of its original features intact, is the wonderful legacy of a creative, fascinating man and its “fairytale” appearance continues to draw huge numbers of visitors today.

Visitor information for Strawberry Hill can be found here.

19 thoughts on “Strawberry Hill: the eccentric house that inspired the Gothic Revival”