When I mentioned to friends that I’d visited Ashby’s Mill, their universal response was “I had no idea there was a windmill in Brixton!”  And it’s true enough that the south London district of Brixton isn’t somewhere that one immediately associates with windmills and rural life – it’s a built-up area that’s more likely to attract comments about crime or gentrification.  But in a little park by an ordinary housing estate is an extraordinary survivor from the days when Brixton was just an open space a few miles from London.  Today, the Brixton Windmill has been carefully restored and provides a wonderful opportunity for local people to get in touch with their area’s history.

In the early 19th Century, Brixton Hill was a rural part of Surrey, mostly made up of farmland and market gardens, with only a few small settlements just to the north.  It was on the high ground of Brixton Hill that a windmill was built in 1816, and leased to the Ashby family, who ran a business milling flour. The land had been part of Stockwell manor until 1802, when that estate had been broken up and sold.  Ashby’s Mill was not the only windmill in the Lambeth area – at least 12 other windmills are known to have existed in the area, many of them by the River Thames.  Ashby’s Mill, however, is the only one that remains today.

A windmill is,in theory, a gloriously simple piece of machinery.  Windmills are known to have been used for at least 2,000 years, and examples of them can be found all over the world.  Powered by the wind, the sails rotate to drive machinery that can then grind grain or pump water.  The cut-out diagram pictured below is used at Ashby’s Mill to illustrate how the windmill would have operated in the 19th Century.

The cogs that drive the machinery in a windmill are specially designed to lower the risk of sparks.  In an environment where a lot of flour was in the air, a single spark could cause a devastating fire, so to remove this risk much of the mill’s machinery was made of wood.  At no point would any metal component be striking anything else made of metal.  Another advantage of having wooden machine components was that they were cheaper and easier to repair or replace.  Millwrights were the tradesmen who specialised in building, maintaining and repairing the machinery in windmills and watermills. 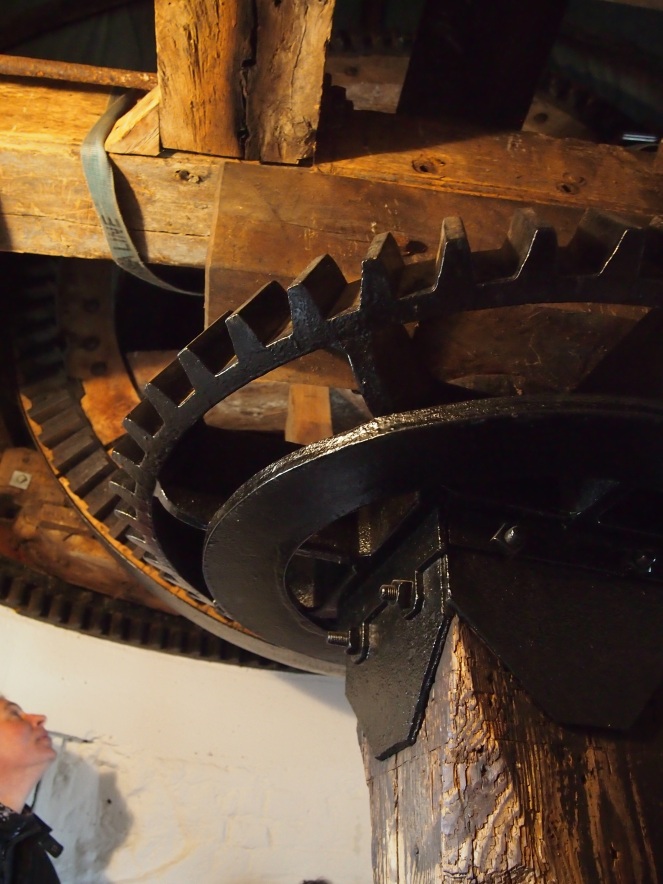 The main purpose of the machinery at Ashby’s mill was to turn the millstone in order to grind grain into flour.  Two millstones, one on top of the other, would grind the grain between them.  The resulting flour was then fed through a chute into another room where it could be bagged up and taken away to be sold. 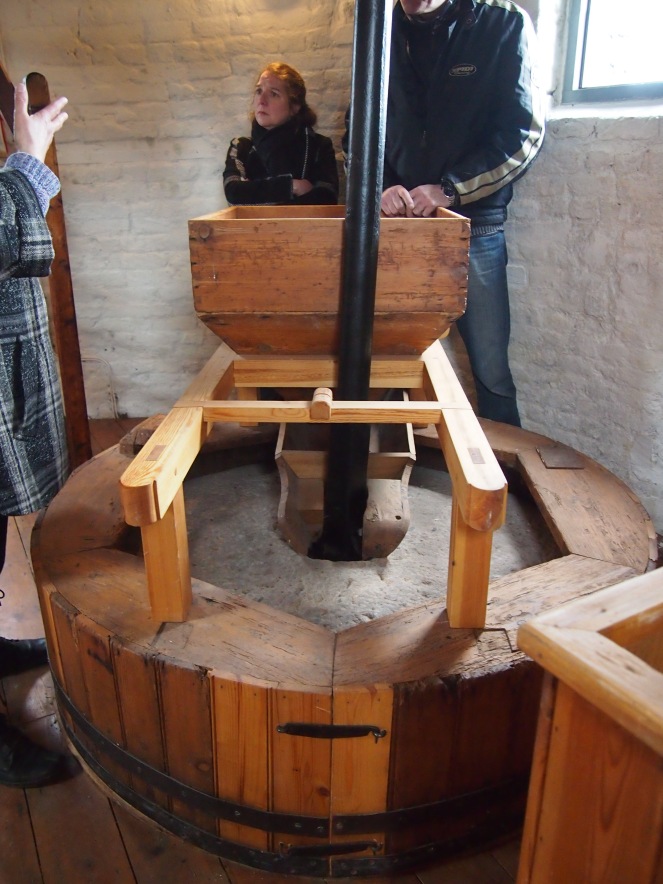 Not much is known about the people who worked at Ashby’s mill – as is so often the case, particularly in the days before the census records began, these working people are invisible in the records.  Working at the windmill would have been tough physical labour, in a cramped environment, with a lot of manpower required to lift heavy sacks of grain and flour.

Today, it’s hard to imagine Brixton as a rural area.  And even in the windmill’s early years, the area was beginning to become built up.  Brixton Prison, originally known as the Surrey House of Correction, was opened near the windmill in 1820.  When the railway arrived in Brixton, it quickly developed as a suburb of London, with a large number of new homes being built.

It’s thought that the increasing amount of development in Brixton contributed to the windmill being decommissioned in 1864.  More buildings in the area meant that it was less windy on Brixton Hill, and without sufficient wind power, the mill could not operate.  The Ashby family moved their milling operations to the more rural Mitcham, and although they retained possession of the windmill at Brixton and the buildings surrounding it, the windmill’s sails were removed and it was used for storage.

This might have been the end of the story for Ashby’s mill, but in 1902 the Ashbys’ lease on the windmill in Mitcham came to an end and an enterprising family member bought new, gas-powered milling equipment that was installed in the old windmill building in Brixton.  Once again the windmill was producing flour, although it now no longer needed its sails or the uncertain promise of wind power.

Milling continued at the windmill until the last member of the Ashby family died in 1934.  After this, no more production took place and the windmill fell into a derelict state.

After the Second World War, the windmill and the land surrounding it was purchased by the London County Council (LCC).  The LCC demolished many of the buildings that clustered around the window, but preserved the windmill and landscaped the area around it, creating Windmill Gardens.  The windmill was Grade II* listed in 1951, highlighting its importance to the area’s heritage.

The windmill itself underwent comprehensive restoration in the 1960s, with new sails being fitted and missing machinery components replaced.  It was opened to the public in 1968, but over time the site became neglected and vandalised, and despite some repairs taking place by the 1990s the building was on English Heritage’s Buildings at Risk register. 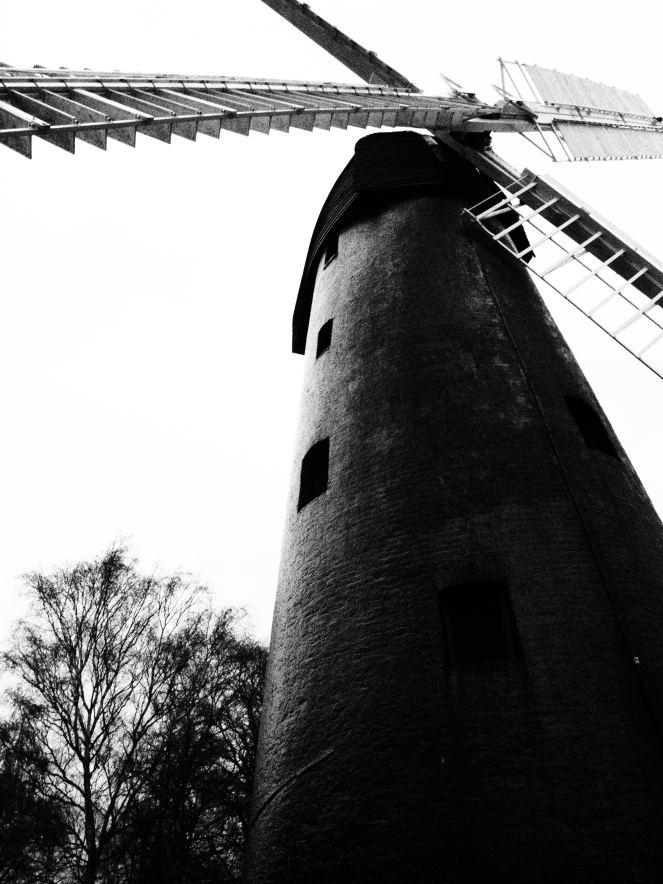 The windmill is a wonderful educational resource – the Friends of Windmill Gardens have designed a programme to be used with children from local schools.  I know that for me, it was visiting historical sites, either with my family or on school trips, that helped to build my interest in history when I was a child, and it’s great to see Ashby’s Mill being developed as a site where a part of Brixton’s past has been preserved for the benefit of the public.  When I visited, young children were among those going on a tour of the windmill, learning how flour was made on the site and what kinds of work the employees of the mill would have done.

As part of the windmill’s restoration, the milling machinery dating from 1902 was converted so that it could be run by electrical power, and restoring the machinery to full working order meant that Brixton Windmill could start milling grain again for the first time since the 1930s.  The Friends of Windmill Gardens are currently fundraising to enable the windmill to produce a regular supply of flour, which could then be sold to local bakeries.  You can see the campaign to get the windmill grinding flour again here.

It’s great to see how a derelict site has been transformed into such a wonderful community resource.  London has expanded so much over the last 200 years that it’s hard to picture how areas like Brixton, that were once separate villages, would have been like before being swallowed up by the growing city.  Ashby’s Mill is a rare relic from the old Brixton, and in the capable hands of the Friends of Windmill Gardens it has been transformed into a fantastic centre for learning and engagement with Brixton’s past at the heart of the local community. 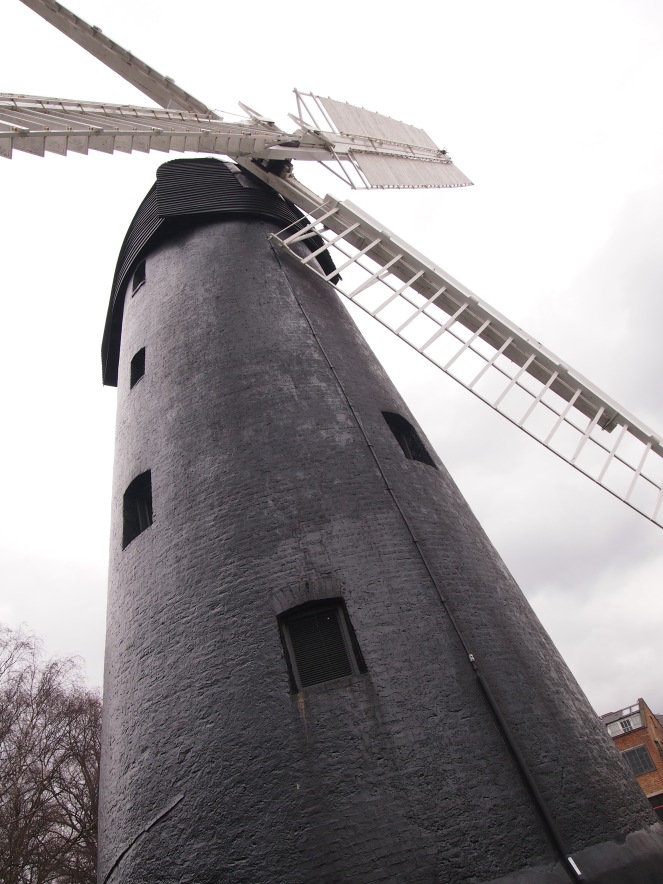 Ashby’s Mill is open to the public on certain weekends during the summer months, with guided tours of the building available to book in advance – you can find out about open days and tour times by visiting their website.

10 thoughts on “Ashby’s Mill: bringing Brixton’s hidden past to life”