The Surrey Hills – an Area of Outstanding Natural Beauty – isn’t the first place that you’d associate with heavy industry.   Today, thousands of people are drawn to the picturesque hills and the lush green countryside.  However, hidden away in the valley close to the village of Chilworth, near Guildford, are the ruins of an industry that dominated the area for almost 300 years – the manufacturing of gunpowder. 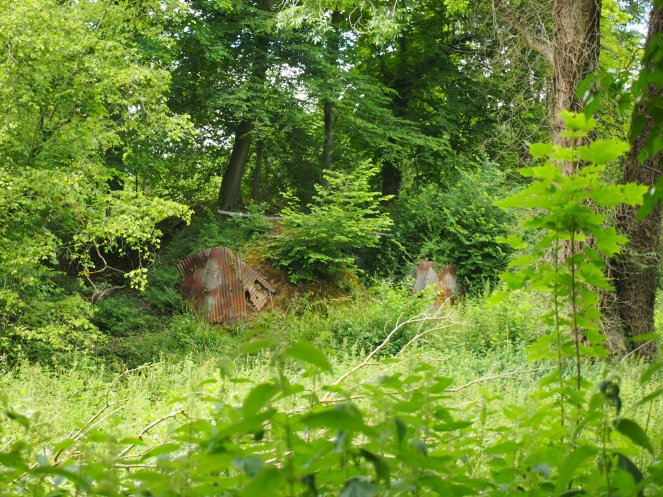 The fast flowing Tillingbourne river attracted industry to Chilworth, as the river could be utilised to power water mills.  The Domesday Book of 1086 recorded a mill in the area, and in later centuries paper and corn mills were established.  In the 16th Century, the Evelyn family set up a gunpowder works in the area after being awarded the royal monopoly on gunpowder manufacture.  In 1626, the East India Company also established a gunpowder mill on the banks of the Tillingbourne.

The East India Company was a privately owned enterprise that was set up to conduct trade with the East Indies (south and east Asia) and was awarded a Royal Charter by Elizabeth I in 1600.  It was regularly in conflict with the Dutch and Portuguese East India Companies which were also vying for footholds on the Indian Subcontinent.  This conflict led the East India Company to raise its own armies in order to protect its trading and territorial interests, so the gunpowder works it opened at Chilworth in 1626 was used to supply its forces abroad.

The manufacture of gunpowder also involved commodities that the East India Company was importing to the British Isles.  Saltpetre, a nitrate used as the oxidising component in gunpowder, was imported in huge quantities from India – during the reign of King Charles II (1660-1685), it is thought that as much as 1,000 tonnes of saltpetre was shipped to England each year, and this quantity only increased as bloody wars on the European continent demanded more and more gunpowder.

By the middle of the 17th Century, the gunpowder works at Chilworth were no longer run by the East India Company, but by other private enterprises.  Their main customer was the English government, and during the English Civil War the mills at Chilworth helped to supply the Parliamentarian forces with gunpowder.  However, governments were not always good at paying the powder manufacturers on time, and the number of powder mills at Chilworth fluctuated over time, as some enterprises failed when their owners experienced financial problems.  In 1704, only one of the three gunpowder mills at Chilworth was still manufacturing gunpowder (one of the other mills was converted into a paper mill).  However, business picked up again in the 19th Century and, as we’ll see, the gunpowder works expanded in this period.

But why was Chilworth chosen as the site for the gunpowder works?  Apart from the favourable location by the Tillingbourne for operating water mills, the valley was full of alder trees which were ideal for making charcoal, another of the materials required to manufacture gunpowder.

Originally invented in China in the 9th Century, gunpowder is a mix of saltpetre, charcoal and sulphur.  Each of the components has to be ground up before being mixed together – altogether, there are six separate stages in the process of making gunpowder, each requiring its own building.  First of all, the ingredients would be weighed out and mixed together in the mixing house, then in the powder mill the ingredients were mixed with water (to minimise the risk of fire) and ground together between two vertical mill wheels.

Once the ingredients had been ground, more water was added to form what was called a “mill cake” – this was then compressed in the pressing house.  This process made the gunpowder mixture more potent, improving its explosive qualities.  The pressed gunpowder was then carefully sieved in the corning house, and then – in the glazing house – rolled with lead to make it more water-resistant.  Finally, the gunpowder would be taken to the packing house, where it was weighed and packed into barrels, ready for transport and sale.

The raw materials for producing gunpowder were brought into Chilworth in barges on the river, and barrels of gunpowder were transported away from Chilworth in the same way.  By the 1650s, a watercourse called the New Cut was dug to the south of the Tillingbourne to provide a new millrace for the water wheels powering the mills.  Other watercourses were also dug, some to power water wheels and others for transport.  These channels are all quite narrow – narrow watercourses allowed water to flow through the water wheels more quickly, and the boats used to transport items to and from the gunpowder works were small punts and barges rather than larger crafts. 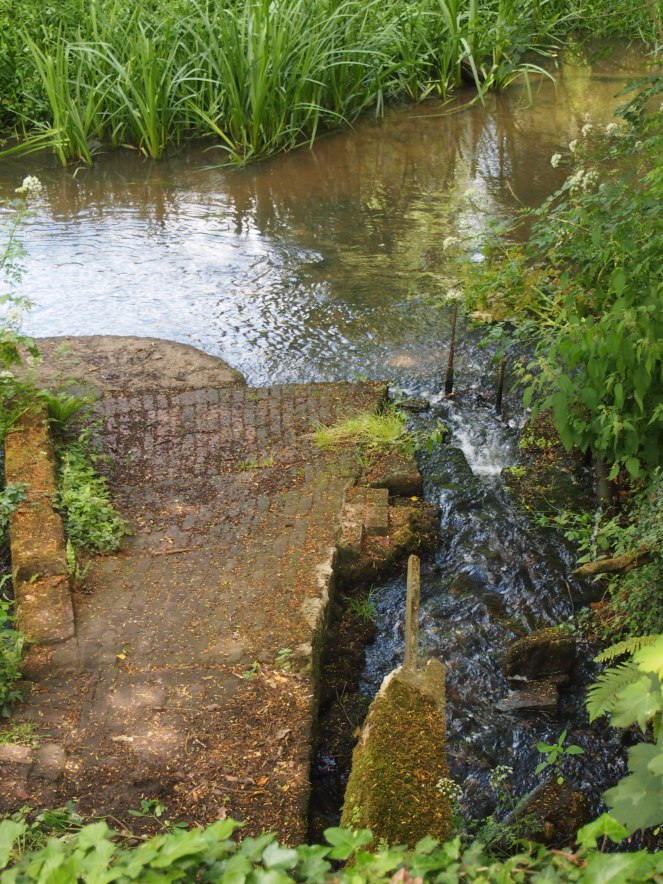 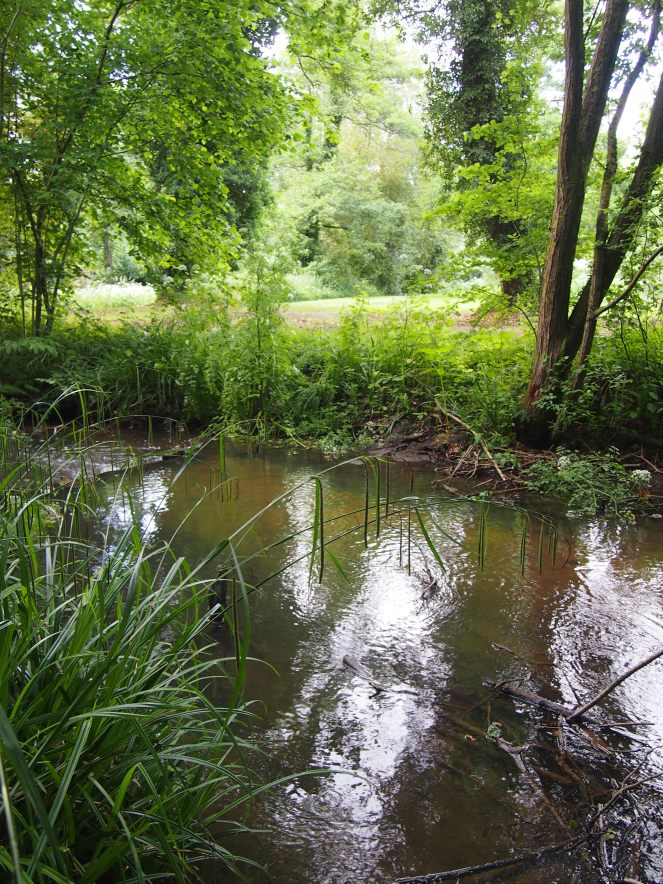 Another reason why the Tillingbourne valley was well suited to the manufacturing of gunpowder was the fact that the different workshops could be spread out over a large area.  This was an important safety measure: having the workshops situated away from each other, with trees in between, meant that if there was an explosion in one building, it was less likely to spread to other buildings and cause a larger amount of destruction.  We’ll see a bit later in the post just how important this was. 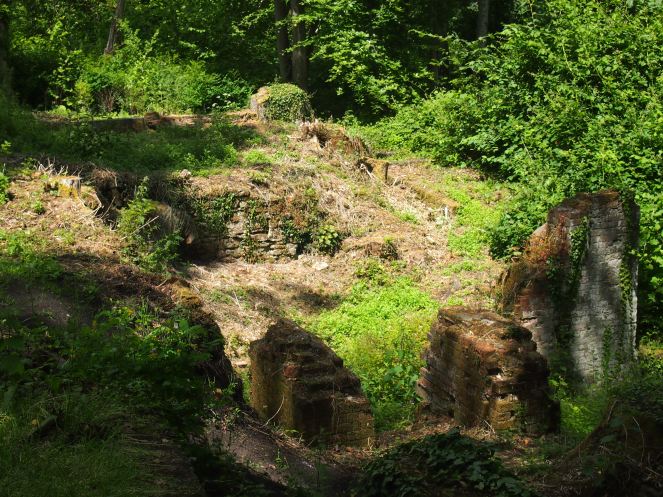 William Cobbett, a journalist and pamphleteer who became famous for his support of Radical politics, visited Chilworth in 1822 and recorded his observations in his book Rural Rides.  Cobbett was struck by the beauty of the valley, and horrified by the industry that blighted it:

This valley, which seems to have been created by a bountiful providence, as one of the choicest retreats of man; which seems formed for a scene of innocence and happiness, has been, by ungrateful man, so perverted as to make it instrumental in effecting two of the most damnable of purposes; in carrying into execution two of the most damnable inventions that ever sprang from the minds of men under the influence of the devil! namely, the making of gunpowder and of bank-notes that! … here has the devil fixed on as one of the seats of his grand manufactory; and perverse and ungrateful man not only lends him his aid, but lends it cheerfully!

The most substantial remains of the gunpowder works are the buildings from the late 19th Century.  The introduction of steam power in the 1860s allowed the gunpowder works to expand significantly.  By the end of the century, Chilworth was manufacturing a number of different types of gunpowder suitable for military and sporting purposes.  In 1885 the Sharp family, who had owned the gunpowder works since 1819, sold the works to the newly-formed Chilworth Gunpowder Company, which raised £100,000 worth of shares – money which was invested in the site and helped it to produce a more diverse range of explosives.

The First World War brought with it an enormous demand for explosives, and the works at Chilworth became an important part of the war effort, manufacturing cordite.  Anti-aircraft guns were installed to protect the site, and although German airships attempted to locate and bomb the gunpowder works, the closest air raid to Chilworth was at nearby Guildford in 1915. 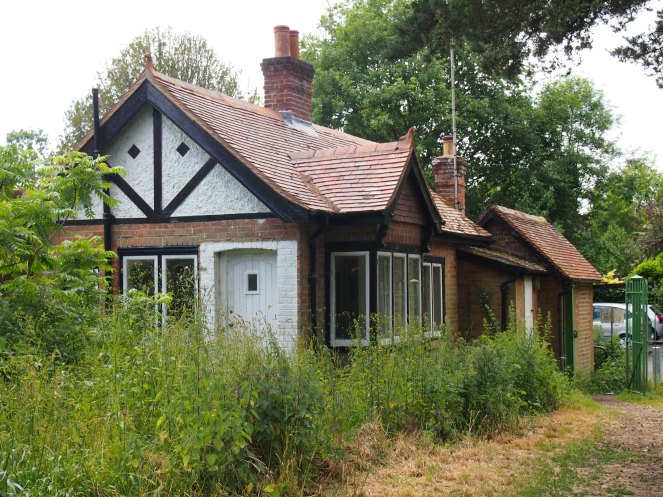 Newspaper reports from the 19th and early 20th Centuries show the dangers of working with a substance as explosive as gunpowder.  There was a constant risk of explosions, and on numerous occasions fatal accidents occurred.  In August 1867, two men were killed in an explosion, the exact cause of which was never determined.  A number of newspapers carried a report of the funeral of the two men, describing in poignant detail the plight of the widow of one of the men killed.

Ellen Farnfield’s position is particularly lamentable – a little over eighteen years of age, and about to become the mother of a second child – not a farthing from the club, her husband wanting five days of being a free member. She bears a most irreproachable character as a respectable and well-conducted young women. (Kentish Chronicle, 13th August 1864)

This report gives us a fleeting and rare insight into the problems faced by those whose relatives were killed in accidents at the gunpowder works.  A terse note in the Edinburgh Evening News on 11th August 1874 simply states: “Both the men who were injured in the explosion at the Chilworth Powder Mills last week are now dead.”

Another fatal accident occured in 1901, with a seemingly innocuous cause.  Six men lost their lives, and an inquest determined that the accident was caused by “a spark from a hob-nailed boot worn by one of the men outside the building.”  The same report goes on:

It was not contrary to the Home Office regulations to wear hob-nailed boots outside.  Witnesses could not speak too highly of the efficiency of the arrangements in the factory for ensuring the safety of the workers… [The jury] were pleased to learn that the company were prepared to supply outside men with special boots, to minimise, as far as possible, the repetition of such an accident. (Sunderland Daily Echo and Shipping Gazette, 23rd February 1901)

Chilworth was an important site for the development of safety measures – it was discovered that building banks of earth close to the buildings where gunpowder was being made helped to contain explosions and prevent other buildings from being endangered.  These banks were strengthened with corrugated iron, and the remains of some can still be seen in the gunpowder mills area today.  This innovation, which became known within the explosives industry as “Chilworth mounds” was adopted at other sites where explosives were manufactured. 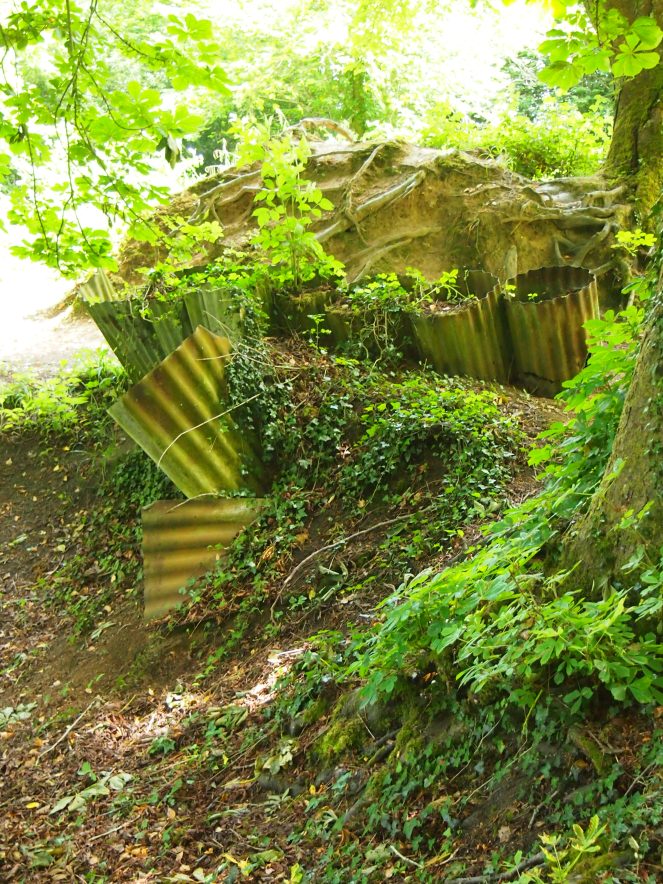 The demand for explosives during the First World War meant that after hostilities had ceased in November 1918, there was a massive oversupply of factories manufacturing cordite and other explosives.  Many of these places found themselves surplus to peacetime requirements, and Chilworth was one of these.  The Chilworth Gunpowder Company closed in 1920, bringing to an end almost three hundred years of explosive manufacturing on the banks of the Tillingbourne.  Some of the buildings on the site were demolished, and others fell slowly into ruin. 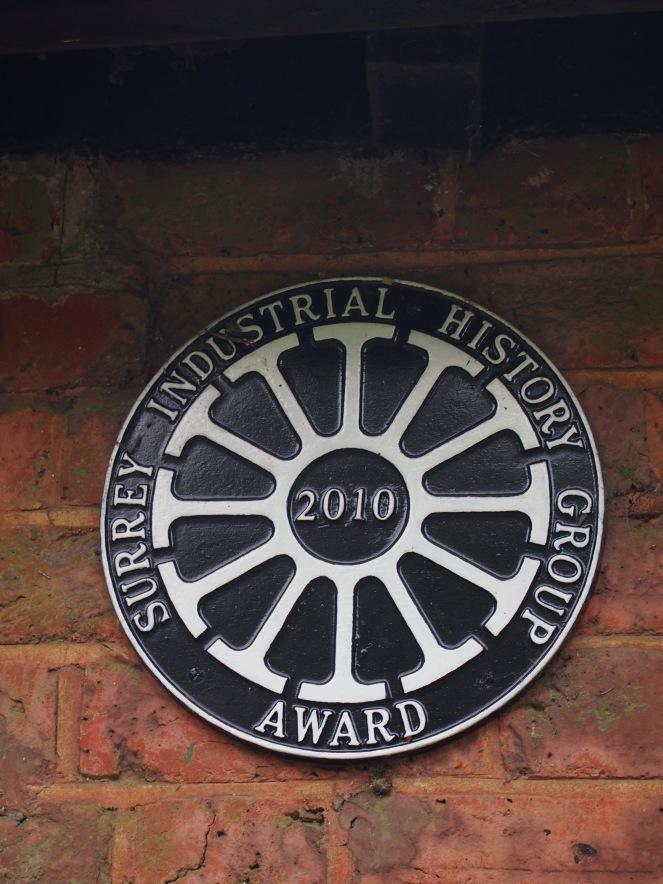 Today, the site of the old gunpowder works is a scheduled monument, and efforts have been made to preserve the remaining ruins.  Guildford Borough Council manages the site, and it’s a popular place for people walking their dogs, going for picnics or otherwise looking to enjoy a pleasant, green space. 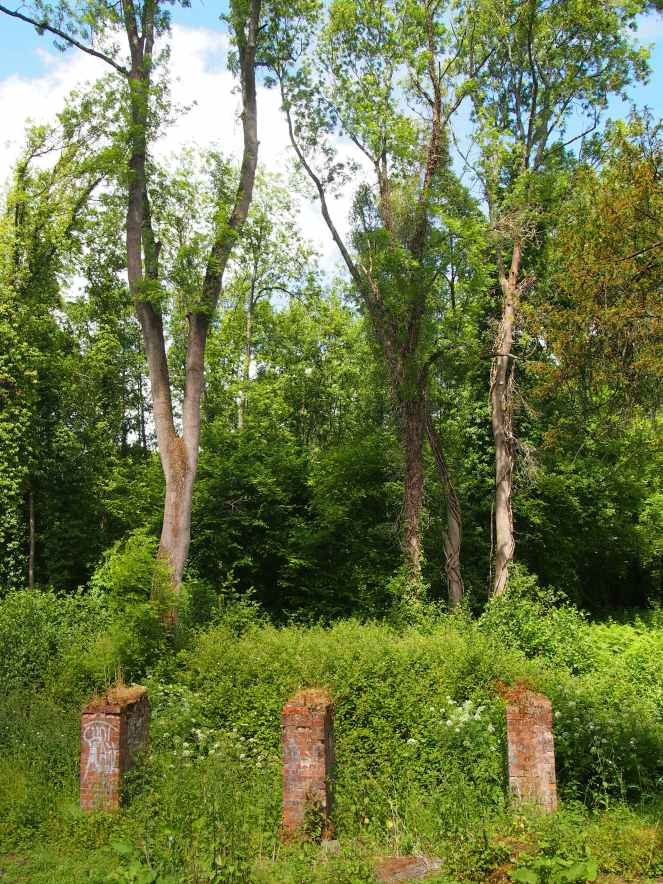 Groups of volunteers have helped to maintain the site, coppicing trees and clearing undergrowth so that the ruins are more visible.  Chilworth is clearly proud of its industrial heritage, and this September a Heritage Day is due to be held on the site of the gunpowder mills, allowing local people to discover more about the industry that dominated village life for almost three centuries.  It’s a fascinating site – so many old industrial areas disappear altogether, from sight and from memory, but the story of the Chilworth gunpowder works hasn’t been forgotten. 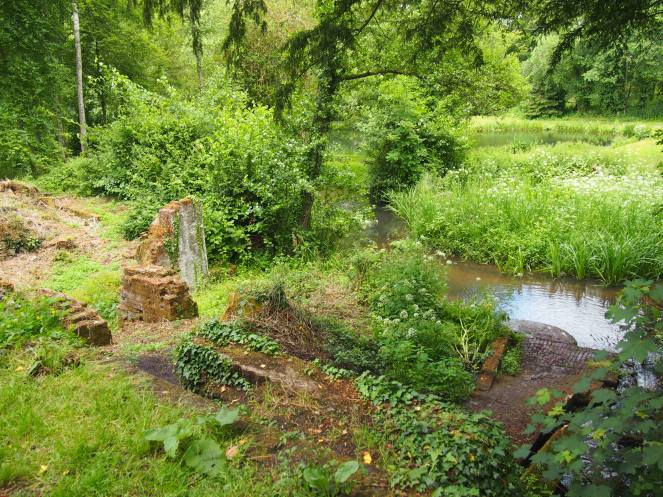 William Cobbett – Rural Rides, via A Vision of Britain Through Time http://www.visionofbritain.org.uk/travellers/Cobbett/10

5 thoughts on “Chilworth Gunpowder Mills: three centuries of industry in the Surrey Hills”