It’s one of the last places you expect to stumble across an old graveyard, but in the middle of the Mile End campus of Queen Mary, University of London, is a remnant of an old burial ground with many stories to tell about the history of East London and the people who settled there. 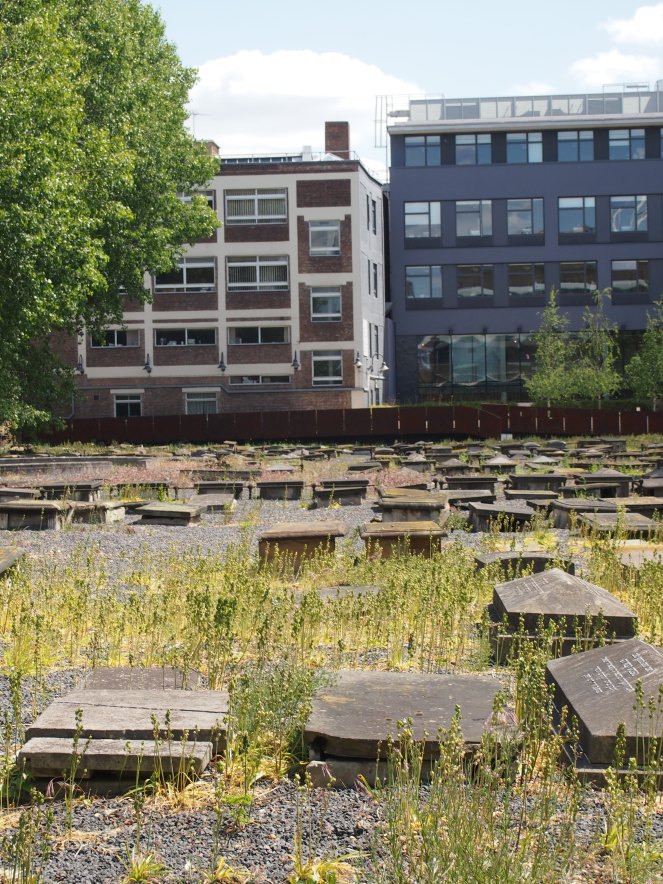 London’s East End has always been a home to diverse groups of people from all over the world, and for a long period of time a sizeable Jewish population could be found there.  Many of the Jews who made London their home in the 19th Century were from Russia or Eastern Europe, Yiddish-speaking people who moved to Britain to escape prejudice and violence.  But the story of London’s Jewish population goes back much further than the 19th Century.

A community of Jewish merchants and traders had grown in the City of London during the medieval period – the earliest record of Jewish people living in Britain is from 1070, in the early years of William the Conqueror’s rule.  The street of Old Jewry and the church St Lawrence Jewry are examples of place names that remember the part of the City where London’s Jewish community resided in the medieval period.  However, as some Jewish people living in Britain became prosperous, resentment towards the group grew and anti-Semitic attacks and even massacres became more common – finally culminating in the brutal and infamous persecution and expulsion of all Jews from England in 1290 during the reign of Edward I.

It wasn’t until the 17th Century that Jewish people could live openly in England again.  One of the earliest Jewish communities to live in London were the Sephardic Jews, who had their origin in the Iberian Peninsula – Portugal and Spain.  Persecuted by the Portuguese and Spanish regimes, the Sephardim were forced to convert to Catholicism, but many fled abroad to be able to continue to practice their faith without fear of persecution.  It’s thought that a small Sephardic community may have been living secretly in London before a petition was made to readmit Jews to England in the 1650s.  After this, although Jewish people moving to England were able to worship openly, they were still regarded as aliens and therefore did not have the same rights as English-born Protestant Christians.  It was two centuries before Jewish people in Britain were given the same rights, such as the right to vote, as their gentile neighbours. 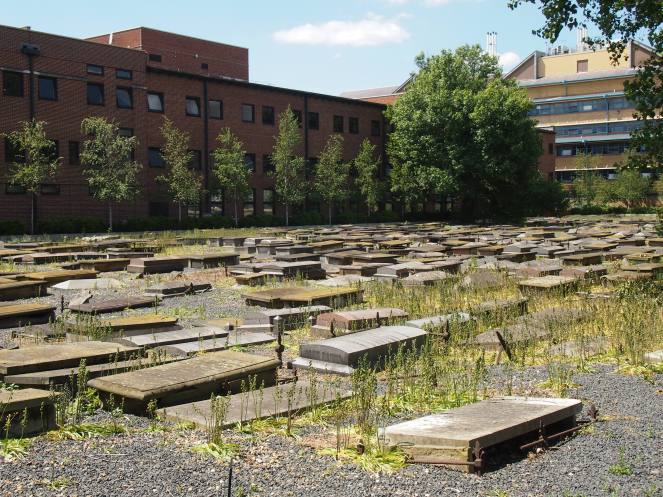 The first burial ground for London’s community of Sephardic Jews was opened in 1657, a little to the west of the burial ground we see today at Queen Mary.  This burial ground, now known as the Old Velho Cemetery, is harder to find than Novo Beth Chaim as it his hidden behind high walls and not visible to the public.  The Gentle Author has written about the Old Velho Cemetery and other old hidden Jewish burial grounds of Mile End here and here.  Hopefully, Flickering Lamps will be able to pay these amazing old old places a visit one day.

By the early 18th Century, the Old Velho Cemetery was deemed to be full, and nearby land was purchased for the setting up of a new cemetery – Novo Beth Chaim.  It opened in 1733, providing burial space for the Sephardic Jews who made London their home, and their descendants.  One of those buried there, in 1816, was Benjamin D’Israeli, grandfather of the British prime minister Benjamin Disraeli.  The famous prizefighter Daniel Mendoza was laid to rest at Novo Beth Chaim in 1836.

When this burial ground was opened in 1733, the Mile End area was still fairly rural and distinct from the urban centre of London.  John Rocque’s 1746 map of London shows Mile End road and the old and new Jewish burying-grounds as being located some distance outside of London’s built up areas, with the two cemeteries surrounded by open fields.

As London grew in the 19th Century, so did its Jewish population.  Novo Beth Chaim was extended in 1855 to meet the demand for new burial space, and the open spaces surrounding the cemetery became built up with houses and workplaces.  In 1886, the People’s Palace was opened close to the burial ground, a cultural venue set up to serve the people of East London.  This was the beginning of the insitution that eventually evolved into Queen Mary, University of London.  It’s quite possible that some of those buried at Novo Beth Chaim attended concerts, dances and other events at the People’s Palace, or used its library and recreational facilities.

Novo Beth Chaim was once much, much bigger than the remaining part of the site we see today.  By the early 20th Century, around 9,500 gravestones could be found in the cemetery.  Today there are about 2,000.  A display at the edge of the burial ground gives visitors an idea of the previous extent of the cemetery.

As Queen Mary, University of London expanded, parts of the burial ground were reclaimed in the 1970s for the construction of new buildings.  Around 7,000 graves were carefully exhumed and the remains reburied in a cemetery in Brentwood, Essex in 1974.  I found this quite surprising, as Jewish law dictates that the graves of Jews should not be disturbed, although there have been occasions where graves threatened by development or natural disasters have been exhumed and remains relocated to ensure the dignity of the deceased.

The graves that remain at Queen Mary are the most recent burials at Novo Beth Chaim, from the late 19th Century up until about 1918, when the cemetery closed to new burials.

The rather stark horizontal grave slabs are a typical feature of many Jewish burial grounds.  The similarity between each grave stone signifies the equality of all people in death, although this does not mean that the gravestones are impersonal.  Many of them carry affectionate, poignant inscriptions that tell us a little about the people buried there.

The remnant of the cemetery that remained after the exhumations and redevelopment work of the 1970s and 1980s was left in a neglected state for many years, becoming overgrown and forlorn.  It is only very recently that this has been rectified.  In 2011/12, in collaboration with the Spanish and Portuguese Jews’ Congregation of London, the graveyard was tidied and renovated, with a new walkway being installed at the south end of the site and information about the burial ground and the people resting there being provided for the first time.  In 2014, English Heritage announced that Novo Beth Chaim was to be entered on to the Register of Historic Parks and Gardens as a site of important historic interest, being one of only two remaining Sephardic burial grounds in England. 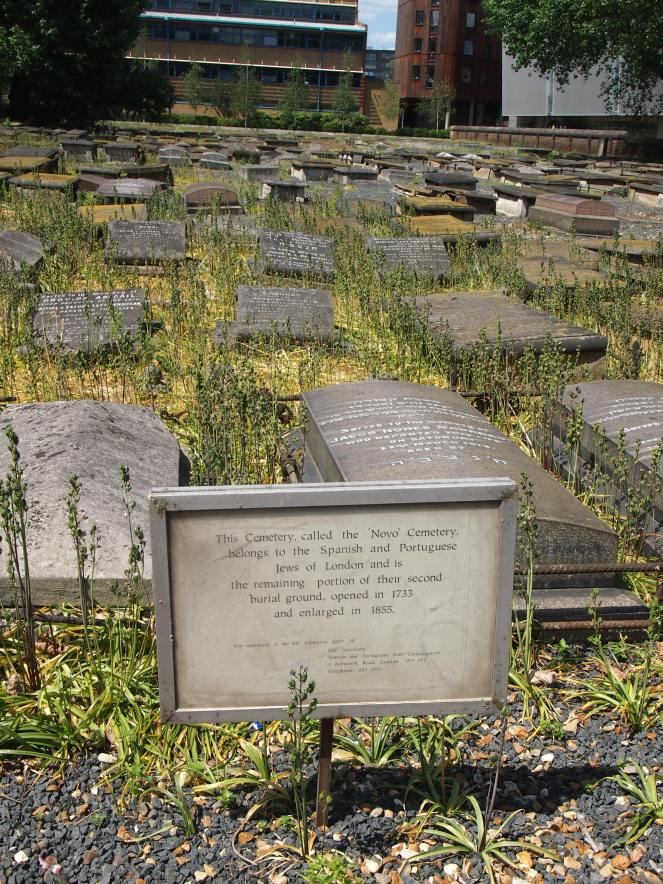 Today, London’s Jewish communities are more strongly associated with areas such as Golders Green, Stamford Hill and Redbridge.  But their legacy remains in the East End, if you look carefully – the graves at Queen Mary are just one part of the vast, often hidden story of the people who have made London their home over the centuries. 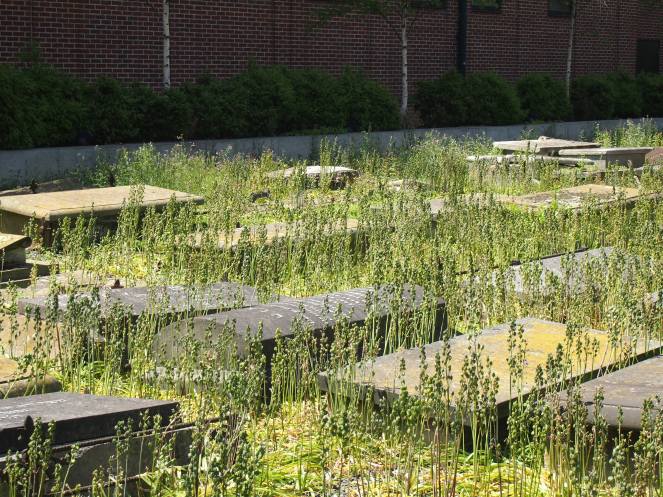 Around Mile End with the Sephardim (Spanish and Portugese Jews), Jewish East End of London Gallery and Commentary http://www.jewisheastend.com/mileend.html

1656 and all that – Eliane Glaser and Stephen Massil debate what did – or did not – happen when Cromwell ‘readmitted’ the Jews, Jewish Quarterly, Summer 2006, No 202 http://www.jewishquarterly.org/issuearchive/article9fda.html?articleid=198