In a pretty churchyard in Woodplumpton, a village not far from Preston in Lancashire, is a mysterious old grave with many dark tales attached to it.  A large boulder – terribly out of place among smart Victorian and Edwardian headstones – is said to cover the grave of a witch.

When one mentions Lancashire and witches in the same sentence, the first thing that comes to mind is the tragic tale of the Pendle witches, one of the most famous cases from the hysterical witch hunts of the 17th Century.  Ten people, mostly members of two feuding families who lived close to Pendle Hill in east Lancashire, were executed in 1612 after being accused of witchcraft and marched many miles over Lancashire’s hills to go on trial at Lancaster Castle.  The testimony of a nine year old girl, Jennet Device, a relative of many of the accused, helped to send the Pendle witches to the gallows and through the widespread coverage of the case the legend of the Pendle witches was born.

The strange grave at Woodplumpton dates isn’t linked to the case of the Pendle witches – it dates from almost a century later, by which time much of the hysteria around witch hunts had died down – although belief in witches and witchcraft could still be found.  The grave is said to be occupied by Meg Shelton, who died in 1705.

It’s impossible to know for certain exactly who Meg was, but it is generally believed that she originally came from the village of Singleton, and later took up residence near Woodplumpton.  There are a number of tales about her, most of which involve her shape shifting in order to steal food or cause mischief.  By all reports, she died rather a grisly death; crushed against a wall by a barrel.  Was this an accident, murder, or one of her own devious plots gone wrong?

Perhaps Meg was the sort of person who practiced the black arts, or perhaps she used old-fashioned herbal remedies for innocent reasons, but others viewed this as suspicious. Perhaps she was just a nasty piece of work.  Or maybe she was a criminal, the kind of person who today would be served with an ASBO (anti social behaviour order).  Perhaps she was disliked by an influential member of the local community who was able to turn others against her.  Or perhaps she was just ill, suffering from a condition like schizophrenia or dementia, conditions which can cause sufferers to behave in ways that are frightening or confusing to others.

One website I found speculated that Meg might have been the mistress of a local lord.  The special treatment she received from him might have bred resentment among her neighbours, and – like in the case of the Pendle witches – feuding gave way to accusations of witchcraft, a sure way at the time to discredit someone.

My main question about her grave is this: if Meg was a witch, why was she buried in consecrated ground, so close to a church? 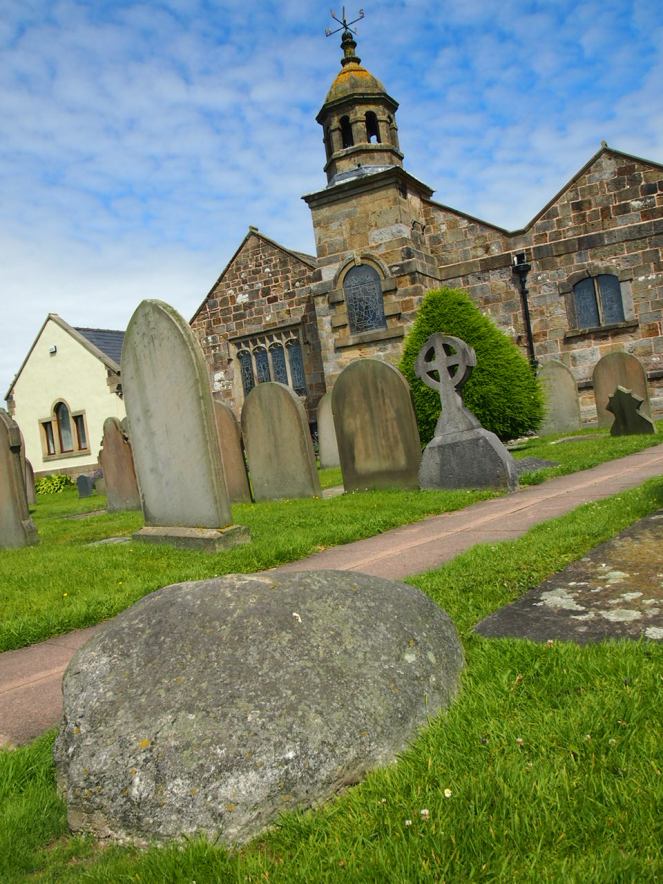 If the stories about Meg are true, the manner of her burial is far from usual.  It is said that after her death, she dug her way out of her grave on more than one occasion, which led to her being buried head first, and with a boulder on top of the grave to prevent any further escapes.  The tale of Meg digging herself out of her grave seems fantastical, although it’s not entirely out of the question that people may have attempted to disturb or exhume her grave, actions which could have fuelled stories about Meg’s escape.

Over the years, excavated graves in Europe have sometimes been found with their occupants buried face down.  In 2014, the skeleton of an adolescent girl was excavated in San Calocero, Italy.  The burial is thought to date from the Middle Ages, and she was found to have been buried face down, leading to widespread media coverage describing her as a “witch girl.”  The director of the excavation explained that “These rare [prone] burials are explained as an act of punishment. What the dead had done was not accepted by the community.”  However, like Meg, this girl was buried in consecrated ground.  Perhaps this girl had friends or family members influential enough in the local community to ensure that despite the disrespectful nature of her burial, she was still buried in sacred ground.

Many people labelled as witches were given unusual burials – archaeologists describe such burials as “deviant burials.”  In Fife, Scotland, Lilias Adie (known as the Torryburn Witch), a woman who claimed to have had sex with the devil, was buried under a huge slab of stone on a beach.  It’s been speculated that the heavy slab, like the boulder over Meg’s grave, was placed there to prevent Lilias from “escaping.”  Such deviant burials were not just reserved for witches – suicide victims were generally buried outside of consecrated burial space, sometimes with stakes through their bodies to prevent their unquiet spirits from rising and terrorising the living.

Since visiting Meg’s grave, I have been searching for other examples of so-called witches being buried in English churchyards.  It has not been a particularly fruitful search, although I found some accounts of a witch buried in Brampton, Cumbria, in 1817.  Lizzie O’Branton, sometimes called Lizzie Batty or Baty, lived close to the village of Brampton and “acted in a peculiar manner, dressed curiously, and generally ‘acted the part,’ with the consequence that she was credited with many supernatural powers.” (Bygone Westmorland and Cumberland, p141)  It seems that Lizzie was only referred to as a witch after her death – in her lifetime, she was known as a wise woman, despite her eccentricities.  After her death it would appear that stories about her were retold and embellished – there is even a “cursed” tea set associated with her.

Perhaps a similar thing happened to Meg after her death – people remembering a strange, mischievous local woman with an odd boulder over her grave started to tell stories of her escapades as a witch.

Meg’s grave still attracts considerable attention today, and many local people are still familiar with the tales about her.  When I visited, a pink flower had been left on the grave.  People who were once branded as witches – and sometimes killed because of this – are viewed more sympathetically today, with many seeing these people as victims of religious intolerance or misunderstanding of medical problems, or scapegoats for misfortunes that afflicted communities.

An old set of stocks, possibly dating from the 18th Century, can be seen just outside the churchyard.

Meg’s was the oldest grave marker in the churchyard I could find – there were others from later in the 18th Century, but most gravestones dated from the 19th and 20th Centuries.

Visiting Meg’s grave made me feel sad for this unfortunate woman.  The apparently deviant nature of her burial – head down – and the heavy boulder above her grave show that she was feared by some members of the community, although the location of her grave in a consecrated churchyard signifies a more respectful burial than many of those accused of witchcraft were afforded; the indignity of an unmarked grave in some lonely, unconsecrated spot.  The boulder and the tales attached to it have ensured that Meg’s story – however far from the truth it may have strayed in the three centuries since her death – has been remembered by the people of Woodplumpton.  Unlike those who accused Meg of witchcraft, and those who gave her an undignified burial , we still know Meg Shelton’s name.

34 thoughts on “Buried under a boulder: the grave of a Lancashire “witch””