When visiting the Isle of Mull, off the coast of western Scotland, you quickly get used to single-track roads, to landscapes where there are more buzzards than humans, and to strange old places popping up wherever you visit – graveyards, chapels, long-abandoned villages, and even the occasional prehistoric monument.  The subject of today’s post falls into that last category.  It’s the oldest place yet featured on Flickering Lamps, and probably the most mysterious – a beautiful stone circle in a remote part of Mull.

The “footpath to stone circle” sign can be seen from the road as one drives towards Lochbuie – not really a village, more a cluster of houses, a tiny chapel and a charming “honesty shop” which is unmanned and allows visitors to make themselves a cup of tea and purchase some supplies.  This little settlement is at the head of a tranquil bay on the south of the island, surrounded by mountains, and home to a medieval castle and a manor house, both belonging to Clan MacLaine of Lochbuie.

The stone circle isn’t too far away from the houses, but it’s not visible from the road and only the sign on the gate alerts people in vehicles passing by to its presence.  Beyond the gate, a succession of white-painted stones guide the visitor through the boggy field to the stone circle.

The weather had been dry all week, but the ground was still very wet – fortunately a few planks and bridges had been put in place to navigate the boggiest parts of the field.

Mull has been inhabited by humans since about 6000BC (the end of the last Ice Age) and over those millennia, the climate has not always been the same as it is today.  It’s likely that when the stone circle was first built, and when it was used by the people of this area, the land wasn’t as wet as it is today.

In the boggy field a single standing stone can be seen, a wide piece of granite that – perhaps – once let people know that they were getting close to the stone circle.

As the ground started to get firmer, we came across a ring of sweet chestnut trees, unusual trees for Mull.  They encircled a ruined stone cairn.  The twisty trunks and branches of the trees added to a slightly surreal, rather magical atmosphere.  The cairn may date from as far back as the Bronze Age and although many of the stones have been robbed out or scattered, the presence of the ring of trees – clearly specially planted around the cairn – shows that it has still been a place that is valued by more recent inhabitants of Lochbuie.

If anyone, or their treasure, was ever buried beneath the cairn, their bones and grave goods have been long lost.  Perhaps the cairn was originally raised over the grave of someone special or important, someone whose status afforded them the privelige of being buried close to the stone circle.  We’ll never know for sure; the cairn’s secrets are lost forever.

Beyond the ruined cairn and the sweet chestnut trees was a mercifully dry track lined on one side by gnarled hawthorn trees. 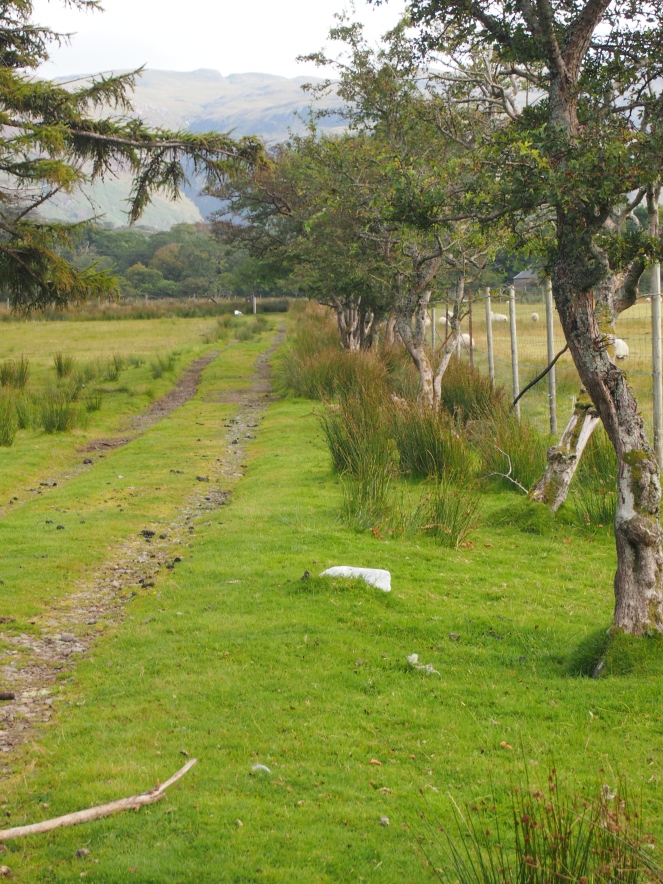 At last, we were drawing close to the stone circle.  Behind a wire fence, the first of three outlying standing stones became visible, a tall granite stone which at some point had been broken, and now resembles a pointing finger. 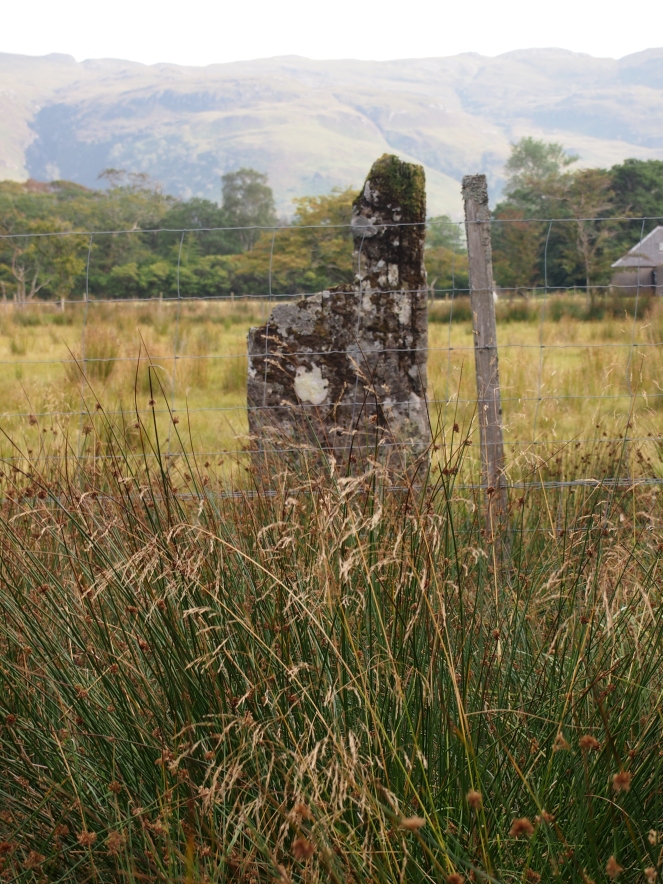 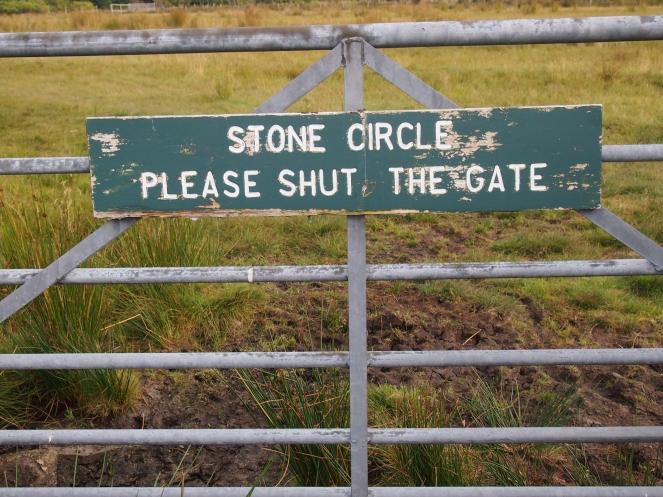 Walking through more boggy ground towards the stone circle, we encountered the tallest of the outlying stones – over two metres tall.

The shape of this stone reminded me of the Shard, the tallest skyscraper in London.

The stone circle itself is not huge – about 12 metres across, and with nine stones.  It is obvious why such a location was chosen for the stone circle.  It sits in a breathtaking natural amphitheatre, with mountains towering around it.  A tall bank of rhododendron bushes – a Victorian invader – obscures the view of the mountains on one side, but when this stone circle was first built there would been a clear view of the surrounding area.

Eight of the nine stones survive today – the ninth has been lost, and at some point was replaced with a small boulder.

Each of the surviving original stones has a flat surface that faces into the centre of the circle.  Some of the stones are pointed, like the tall outlying stone, while others are more rectangular in shape.

All of the stones are of slightly different sizes, whether by design or due to the availability of suitable granite rocks for the stone circle.  Over time, they have weathered and become covered in lichen, but they are still large stones.  Here’s my Dad standing with one of them to give an idea of the stones’ size.

Many of the stones, including the outliers that were not part of the stone circle, were scoured with mysterious lines.  It’s not the first time I have seen this – a small cluster of standing stones outside Tobermory, in another part of Mull, also bear similar markings.  There is no way of telling why they are there, or what they might mean.

What kind of people would have built such a monument?  It’s not entirely clear exactly how old the stone circle is, but it is thought to date either from the late Neolithic period (before 3000BC), or the early Bronze Age.  The kind of society that built such a monument would have been a complex one.  A people clinging to the island, only just producing enough to stay alive, would not have been able to construct a stone circle.  Such an undertaking would have required a great deal of planning, and of labour.  A site had to be chosen, suitable stones had to be sourced, the positions of the stones needed to be determined and a great deal of strength would have been required to move the stones to the site and set them upright. 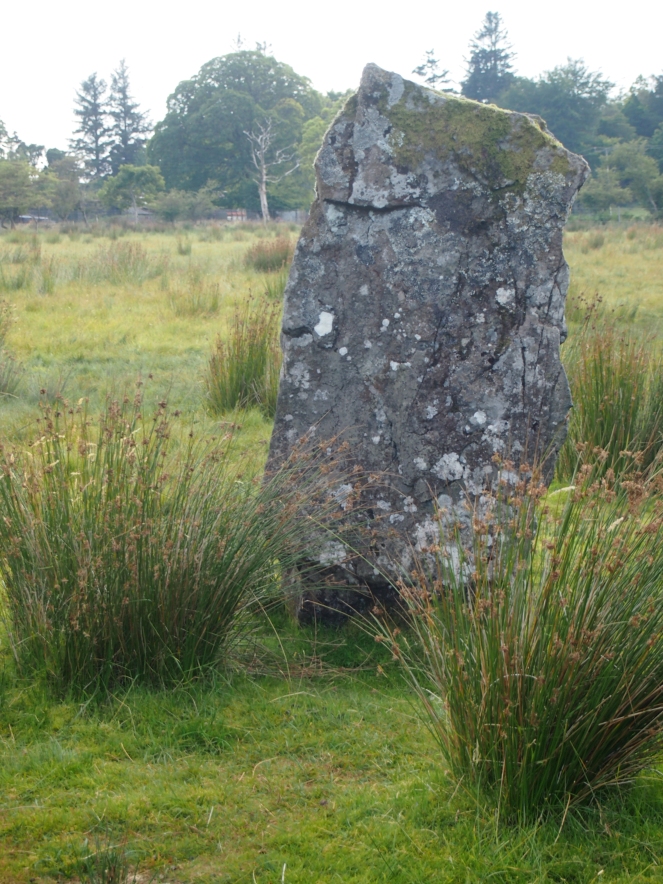 The outlying stones seem to indicate the positions of the sunset at the Winter Solstice, and on other Quarter days during the winter.  This is the kind of knowledge that would only have come about after years of observations and measurements.  It is impossible to know exactly how these people, living around 5000 years ago, would have made these observations.  But they did, and this indicates that perhaps this society had a class of people – would we call them priests, shamans, scientists of a sort? – who were able to identify the positions of the sun at different times of the year and recognise the significance of these positions.

There’s a real sense of peace about this place.  It’s actually not too far from some farm buildings, and many of the surrounding fields are filled with sheep and cattle, but the stone circle itself is quiet.  Only the calls of a pair of buzzards calling to each other nearby shattered the silence on the day we visited.  A group of young pheasants clustered nearby, well camouflaged in the grass and undergrowth.

The allure of these prehistoric sites, to the modern-day visitor, is above all their mystery.  There is something quite humbling about seeing the monument of a forgotten people still standing proudly after many thousands of years.  We can walk among the stones, wondering how they were brought there, how each individual stone was chosen, how the location of each stone was decided.  Who were the men and women who built this stone circle, and who were the people who gathered there, perhaps on certain days of the year?  What was the weather even like then?  Perhaps the now boggy field was once firm and dry, a pleasant spot for people to gather.  Was the stone circle a place of celebration, or a place of remembering and reflecting?  We can’t know the answers to these questions, and that makes the site even more special, somehow.

The people who built the stone circle are long gone, and without the standing stones we would not have even known they had once been here.

15 thoughts on “The mysterious and majestic stone circle at Lochbuie”