It’s impossible to miss Duart Castle.  It stands proudly on a spur of land reaching out into the Sound of Mull, and it’s a familiar sight to people who travel through those waters.  The powerful MacLean clan have controlled Duart Castle for much of its history, using the castle’s prominent location as a symbol of the clan’s power and prestige.  In common with other Scottish castles, Duart has a fascinating, turbulent and sometimes bloody history, from medieval clan wars to the Jacobite uprisings of the 18th Century.  Today, the Chief of Clan MacLean welcomes visitors from all over the world to his family seat, so that they can learn about the history of the castle and the clan that made it their home. 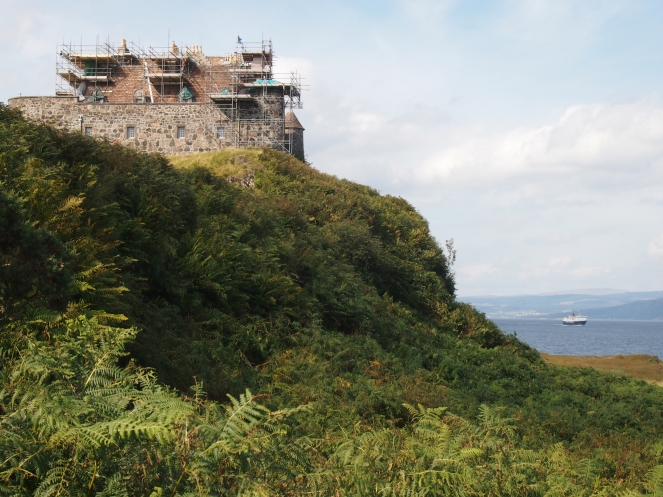 The MacLean clan has its origins in the 13th Century, with the clan’s first chief being one Gillean of the Battle Axe.  Duart Castle first came into the ownership of the MacLeans in 1367, as part of the marriage settlement between Mary MacDonald, daughter of the powerful Lord of the Isles, and Lachlan, Chief of Clan MacLean.  Duart Castle had previously been owned by the MacKinnon clan, and a fortress was already on the site when it passed over to the MacLeans.  Lachlan MacLean set about rebuilding and strengthening his new possession, transforming it into a formidable family seat and ensuring that the MacLeans of Duart Castle were the most powerful family on Mull.

The walls of the keep are incredibly thick – the land-facing walls are ten feet (3 metres) thick, while the sea-facing walls are up to nine feet thick.  The land-facing side of the castle was more vulnerable; attacks on the castle tended to come from land-based forces, rather than from the sea.  The castle’s position high on the cliffs above the water meant it was less vulnerable to cannon fire from warships.

Inside the castle, the narrow spiral staircases were carefully designed so that they could be defended by a single swordsman, so even if enemy warriors managed to break into the castle, it would still be difficult for them to advance to the upper floors.

The clans of the Scottish Highlands and Islands often fought amongst themselves in the medieval period, with many deadly feuds and brutal murders.  One tale about the MacLeans in particular is famous.  The 11th Chief, Lachlan, had married a daughter of the powerful Campbell clan in the early 16th Century, but their marriage was not a success and they produced no heir.  Hoping to rid himself of his wife, the chief arranged for her to be left marrooned on a rock out at sea that would be submerged as the tide rose.  He sent a messenger to the Campbells to deliver the news of his wife’s death, but when Lachlan later arrived at the seat of the Campbells he was surprised to find his wife sitting with her relatives.  She had been rescued by a passing fisherman and returned to her family.  The attempted murder of his wife earned Lachlan the enmity of the Campbells, and he was murdered on their orders in 1523.

The views over the Sound of Mull from the castle are quite spectacular – on a clear day, like the day I visited, it’s possible to see all the way to Ben Nevis, over 30 miles away.  Such commanding views made it easy to spot approaching enemies.

The castle was further strengthened and enlarged in the 16th Century, and it even had a small part to play in the famous tale of the Spanish Armada, sent to invade Elizabeth I’s England in 1588.  Terrible weather forced many of the Spanish ships to take a long route home around the north coast of Scotland, and many ships came to grief on rocky shores, far from home.  One badly-damaged Spanish galleon put down anchor in Tobermory Bay, a few miles north of Duart Castle.  The captain of the ship appealed to the MacLeans for aid, and the Clan Chief agreed, as long as the Spanish lent him troops and supplies for his ongoing feud with the MacDonalds.  However, the Spanish vessel was blown up – it remains a mystery as to who was behind this, and rumours persist of large quantities of Spanish gold lying undiscovered in Tobermory Bay.  Some of the Spanish troops were held prisoner at Duart Castle, and today models of these men can be seen in the castle dungeons.

During the conflict known as the English Civil War – but which also involved forces from Ireland and Scotland, and is sometimes referred to as the Wars of the Three Kingdoms – the MacLeans took up the Royalist cause.  Sir Hector MacLean, the 18th Chief, was killed at the battle of Inverkeithing in 1651, a battle which ended with a decisive win for Cromwell’s forces.  Duart Castle was beseiged in 1647, and again in 1653, when Cromwell sent six warships to the castle.  A terrible storm blew up while the ships were anchored near Duart, and three of them sank.  The wreck of one of these ships, thought to be the warship Swan, was discovered in 1979 and many interesting artefacts have been recovered from the site, some of which can now be seen as part of display at Duart Castle.

The MacLean clan’s support for the Stuart family would cost them dearly.  Duart Castle was lost to the family in the late 17th Century, passing over into the ownership of the Duke of Argyll, a member of the Campbell clan, to pay the family’s debts.  Argyll demolished parts of the castle, and some of the stones were reused for other buildings.  It would be over 200 years before the castle was once again in the hands of MacLean family.

Despite the loss of their ancestral seat, the MacLeans continued to support the Stuart cause following the exile of James II and his heirs in 1688, and after the Jacobite uprisings of 1745, which concluded in the Battle of Culloden, the MacLeans lost their remaining lands as punishment for their support of the exiled Stuart pretenders to the throne.

A small, sad graveyard can be found close to the castle; this is the final resting place of some of the soldiers of George II garrisoned at Duart between 1745 and 1751 and their families.  A few small, unadorned stones mark some of the graves in the uneven ground.  A larger burial ground exists half a mile or so from the castle (which you can read about here) but apparently the men garrisonned at Duart did not wish to see their comrades buried with the local “heathens”.  It was arranged for a piece of ground to be consecrated by an English bishop, and those who died while the English garrison was in place at Duart Castle were laid to rest overlooking the Sound of Mull.  It’s a beautiful spot, but life for the soldiers and their families at this time was probably very harsh, cold and bleak.  The castle was in a ruinous state, hardly fit for habitation, and in 1751 the garrison was abandoned. 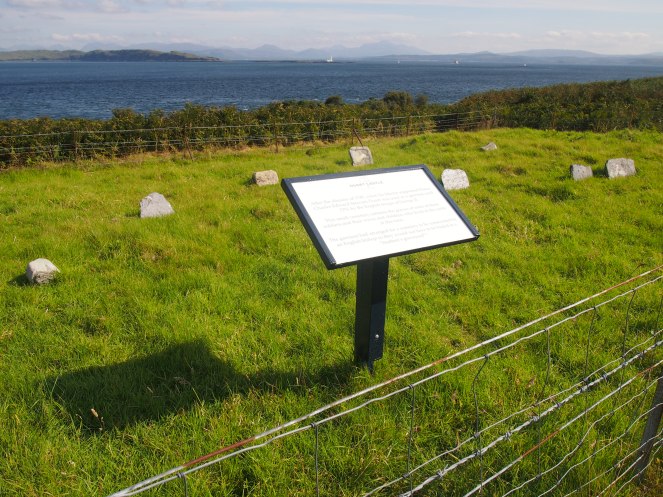 After the castle was abandoned in 1751, the land on which it stood changed hands a number of times after being sold by the Duke of Argyll in 1801.  The 26th Chief of Clan MacLean, Sir Fitzroy MacLean, bought the ruined castle and the surrounding land in 1911, returning Duart to the MacLeans for the first time in over two centuries.  Sir Fitzroy was a veteran of the Crimean War, and harboured a desire to see his family seat back in MacLean hands.  Once he had bought the castle, he set about restoring it to its former glory – a daunting task.

In August 1912, members of the MacLean clan from all over the world gathered at Duart Castle to celebrate its return to the family.  Around 700 people attended, and the MacLean flag was raised over the castle’s battlements for the first time in over 200 years.

Once the castle was habitable again, the Chief and his family used it as one of their homes.  It is still used as a home by the MacLeans today, and the current Chief, Sir Lachlan, can often be found talking to visitors.

Sir Fitzroy lived to the venerable old age of 101, celebrating his 100th birthday by planting a rowan tree in the castle courtyard to protect the site against evil spirits.  Rowan trees have long held a special place in Scottish folklore, and in planting the tree in the castle courtyard on his birthday, Sir Fitzroy was continuing a Scottish tradition of planting a rowan close to a door or gate.  After his death in 1936, he was buried in the little graveyard not far from the castle, and his memorial faces the castle he spent so much time, money and energy restoring.

Inside the castle, some rooms have been laid out to show how they would have looked in the early 20th Century, when the MacLeans moved back in.  In many ways it is a typical Edwardian home, but as the picture below shows, it has the thick walls of a medieval fortress.  Even with modern plumbing and heating, it must be a difficult place to heat, and it must have been a very bleak place in the winter for the castle’s occupants throughout the ages.

Much of the sections of the castle open to visitors are dedicated to the display of artefacts associated with the MacLean clan, including a lot of military regalia.  Like many Scottish clans, the MacLeans have a proud history of serving with the British armed forces, and during the First World War members of the MacLean clan in America also formed a battalion to serve in Europe.

Other rooms contain more personal memorabilia, including a lot of wonderful family photographs of the MacLeans from the 19th Century to the present day.

Overall, the castle as it appears today is a celebration of Clan MacLean.  The clan’s history, from its 13th Century origins to the present day, is explored and displayed and the Clan Chief himself is often present to greet visitors.  My visit to the castle inspired me to learn more about Scottish history; about the clans, their origins, and their relationship with the rest of Scotland.  Duart Castle forms a focal point for the many members of the clan and in 2012 hosted a special event to mark the centenary of Sir Fitzroy’s famous gathering to celebrate the castle returning to the MacLeans.  The castle provides a rare opportunity to visit a clan seat that is still owned by members of the clan itself, and its position high on the cliffs overlooking the Sound of Mull means that the views from the castle are breathtaking.

You may be wondering why many of the pictures of the castle featured in this article show it covered in scaffolding.  In 2014, a number of ceilings in the castle collapsed and it was found that a lot of damp and moisture was getting into the fabric of the castle through cracks and gaps in the building’s masonry, particularly on the roof.  The workmen present on the day of my visit were working on the chimneys, replacing mortar that had deterioriated and washed away and ensuring that water would no longer be able to get in through the walls and roof.  It is hoped that this work will help to preserve Duart Castle and keep it open to the public for generations to come.

Please help to save Duart Castle – a plea from the Chief of Clan Maclean http://www.maclean.org/duart-appeal/

23 thoughts on “Duart Castle: the turbulent history of the ancestral home of Clan MacLean”