The word “necropolis” is incredibly evocative – it is somehow a far more atmospheric term for a burial ground than “graveyard” or “cemetery.”  The word derives from the Ancient Greek term nekropolis (νεκρόπολις), which translates as “city of the dead.”  Rather fittingly, given the origins of the term necropolis, today we are visiting the Greek Necropolis, a small but dramatic section of West Norwood Cemetery in south London – a Greek Orthodox cemetery that contains the highest concentration of listed funerary monuments anywhere in Britain.

The cemetery at West Norwood, one of London’s “Magnificent Seven” Victorian cemeteries, was opened in 1836 as the South Metropolitan Cemetery, one of a number of new, specially-landscaped private cemeteries created to deal with London’s growing population.  Not long after this, members of Greek community who had settled in London purchased a plot of ground within the cemetery for £300, railing it off and establishing it as a separate burial ground for London’s Greek Orthodox community.

But why West Norwood?  This south London district, in the borough of Lambeth, has no specific links with London’s Greek community, who largely lived in central areas of London such as Finsbury Circus and Bayswater in the 19th Century.  But by this time burial space in London’s urban areas was in short supply, and therefore it made a lot of sense for the community leaders to find a permanent space where their families could be laid to rest for generations to come.  West Norwood was a beautiful new burial ground, landscaped by William Tite and attractively situated on a hillside facing central London – a far cry from the overcrowded churchyards of the inner city.  Many of London’s wealthy residents chose to bury their loved ones there, raising grand monuments in their memory.   It was a prestigious place to be buried, and it is perhaps this that influenced the Greek community leaders to choose it as the site for a Greek Orthodox burial ground.

The people buried at West Norwood were not the first Greeks to settle in London.  Evidence has been found of Greek people living in Londinium in the Roman period, and there are records of Greek individuals living in the city during the medieval period, but a Greek community did not begin to grow in London until the 17th Century.  Many of the first Greeks to settle in early modern London, like so many people from overseas who came to London, were sailors on merchant ships.  Greek Street in Soho, in London’s West End, is named after a short-lived Greek Orthodox church in the area, and it was a Greek man, George Constantine, who operated the famous Grecian Coffee House in London during the 18th Century, where many of the great intellectuals of the day met to discuss their work and ideas.

The early 19th Century was a turbulent time for the Greek people, as Greece fought a war of independence against the Ottoman Empire from 1821 to 1832, which ultimately led to the modern state of Greece being established in 1832.  During the war with the Ottomans, Greek traders were subjected to harsh reprisals from the Ottoman authorities and fled abroad to re-establish their businesses in new markets.  London, a major centre of global trade and finance, and seat of the growing British Empire, was an attractive place for merchants to set up business, and many Greek families settled in the city.  Greek merchants soon became a dominant force in the City of London’s Baltic Exchange, and over time many prominent Anglo-Hellenic families assimilated into the English upper middle class.

The mortuary chapel that draws the eye in the burial ground is one of several monuments commissioned by the influential Ralli family, members of whom had been among those instrumental in securing the plot at West Norwood for the Greek community.  Originally from the island of Chios, location of a terrible massacre of Greeks in 1822, the five sons of Stephenos Ralli grew their father’s shipping company into a business empire that by the beginning of the 20th Century had interests across Europe, America and India.  It was the Ralli family who helped to fund the construction of the Greek Orthodox Cathedral of St Sophia in Bayswater, and a number of their family members are buried at West Norwood.

The stunning Doric mortuary chapel, dedicated to St Stephen, was built in memory of a member of the Ralli family who died young.  Augustus, son of Stephen Ralli, had died of rheumatic fever whilst a student at Eton in 1872.  The chapel’s design is influenced by the famous Parthenon in Athens, but the carvings and images on the chapel show Christian, rather than Ancient Greek, scenes and figures.  The architect of the chapel was John Oldrid Scott, a prominent architect of the day who also designed the Greek Orthodox Cathedral of St Sophia.

A beautiful Doric temple-style mausoleum on the edge of the Greek necropolis marks the final resting place of another Ralli family member, Eustratios Ralli, who died in 1884.  Like the mortuary chapel it fuses neoclassical and Christian design elements, and was designed by another high-profile architect, in this case Edward Middleton Barry, son of the Houses of Parliament architect Charles Barry.

An imposing two-storey mausoleum commemorates John Peter Ralli, one of the Ralli brothers who had first come to London earlier in the 19th Century to build the family business there.  Once again, the family employed a prestigious architect, George Edmund Street, to design the memorial.  Street was primarily a Gothic Revival architect, but his design for Ralli’s mausoleum was inspired by Byzantine barrel-vaulted tombs.

Possibly the best-known of the Greek shipping magnates who settled in London and was later laid to rest at West Norwood is Panayis Athanase Vagliano, a man often described as “the father of modern Greek shipping.”  Born on the Greek island of Kefalonia, he moved to Russia in 1840 with his two brothers and became a grain merchant.  He was able to capitalise on the increased grain prices brought about by the Crimean War, and later moved his business to London.

Vagliano’s tomb, where he rests alongside his brother Marinos, looks a little forlorn these days, with its entrance boarded up and its roof covered in vines, but it is still an imposing sight, its design inspired by a Roman-era structure in Athens called the Tower of the Winds.

The majority of the big monuments in the necropolis are in the neoclassical style, but the mausoleum of the Argenti family bucks that trend, instead utilising the Egyptian Revival style that was popular in the early Victorian period.

The Greek families who settled in London did not just come from what is now modern Greece. Many lived in other parts of the Ottoman Empire, such as the capital Constantinople (Istanbul), while others were born in cities that also had links to Mediterranean and global trade, such as Marseilles in the south of France.

The graves in the Greek necropolis are tightly packed together, and although burials continued well into the 20th Century, there is no longer any more room for new burials.  Greek Orthodox sections have been opened at other cemeteries in London, such as the ones at Kensal Green and New Southgate, all – like the section at West Norwood – cared for by the Greek Orthodox Cathedral of St Sophia.  The Greek necropolis at West Norwood may no longer be in use, but it leaves a tremendous legacy – a total of 19 listed monuments on a very small site, beautiful graves commemorating a community who made their mark on Victorian London. 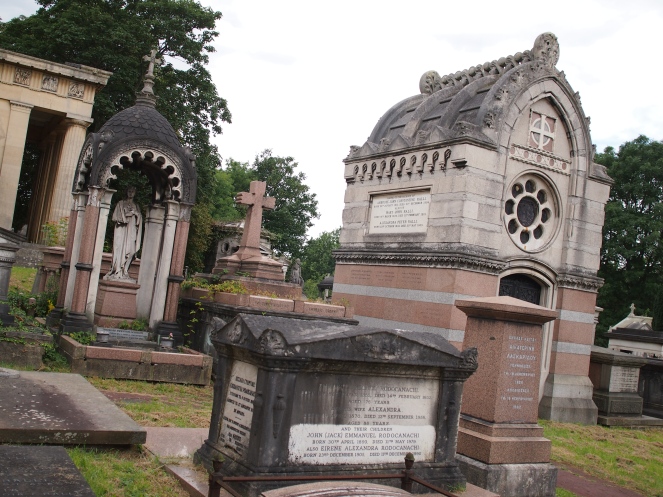 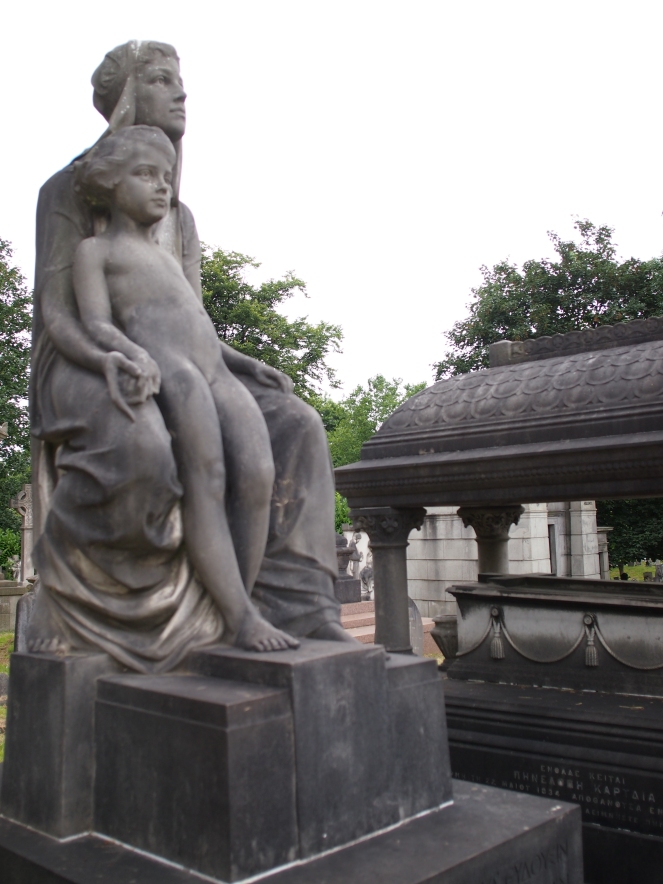 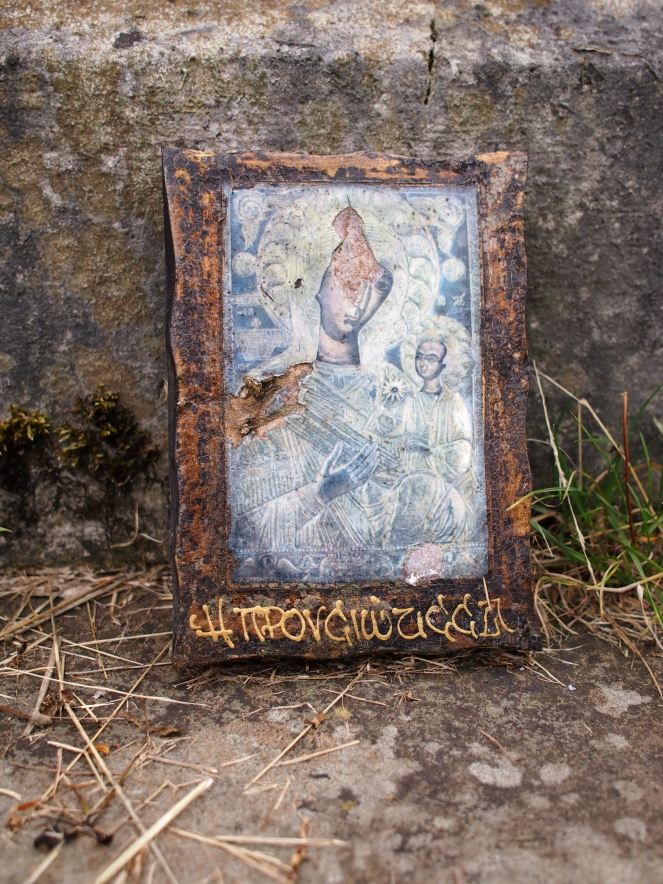 The Cemetery within a Cemetery – Cemetery Club, 24th March 2014 https://cemeteryclub.wordpress.com/2014/03/24/the-cemetery-within-a-cemetery/