When visiting Lord’s, the Home of Cricket, one of the many famous sights for cricket fans is the Father Time weather vane.  Its appearance – Father Time, complete with a Grim Reaper-esque scythe, removing the bails in the manner of an umpire at the close of play – seems oddly morbid, until one reads the Law of Cricket that it is inspired by: “After the call of Time, the bails shall be removed from both wickets.”  Over the years, Father Time has had a few adventures, falling foul of the weather on more than one occasion and most notably, being the only casualty at Lord’s during the Second World War. 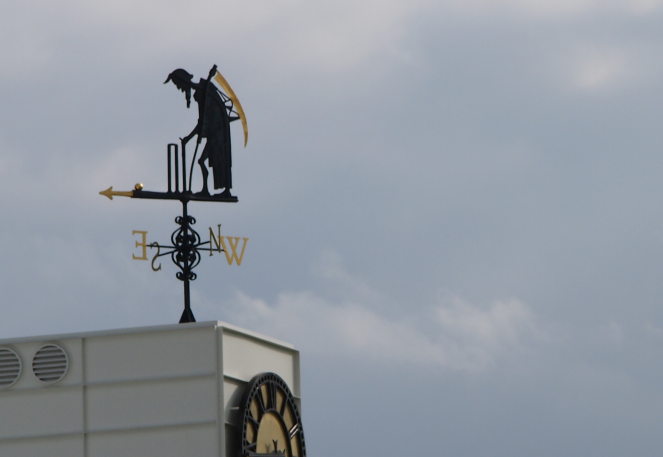 Lord’s, in St John’s Wood in north London, is the headquarters of the Marylebone Cricket Club and one of the most famous grounds in world cricket.  Cricket has been played on the site for over 200 years.  The weather vane was given to Lord’s by the architect of the Grandstand, Sir Herbert Baker, in 1926, and it has since become one of the iconic features of the ground.  A piece appearing in the Exeter and Plymouth Gazette on 28th July 1933 muses on the symbolism of the weather vane:

I like even the Lord’s weather-vane.  It is curious nobody, as far as I know, as ever written about that piece of MCC furniture.  Perhaps everybody takes it for granted nowadays.  But what a most appropriate and even poetical weather-vane it is.  Behind a wicket stands, just slightly bent, like a good keeper, the figure of gaunt old Father Time.  Whilst the cricket goes merrily on below, and the weather-vane shifts in the win, that grim old gentleman with the scythe and hourglass stands faithful to his tryst.  Is that weather-vane merely intended, I wonder, to be symbolic of life, with Father Time patiently waiting to stump us each in turn?  Or, since they have put him just above the scoring-box, has he a more instant and practical innuendo?  Is he just an enigmatic hint to a slow-scoring batsman?

Father Time is a well-known personification of the passage of time; similar to the more threatening figure of the Grim Reaper, he carries a scythe.  He is usually also shown carrying an hourglass, another symbol of the passage of time.  Generally portrayed as a bearded old man, he is often depicted on clocks and is commonly pictured as a representation of an old year making way for a new year (often represented by an infant).  He is linked to the ancient Greek figure of Chronos, a personification of time.  During the Rennaisance, Chronos was sometimes confused or perhaps deliberately associated with the scythe-wielding titan Cronus, and the combined imagery of these two figures in turn inspired the figure of Father Time.

The image below shows Lord’s in 1930 during the second Ashes test between England and Australia, with Father Time visible on the top of the Grandstand.  The R101 airship is passing overhead.

Many sporting venues, including Manchester United’s Old Trafford ground, were damaged by bombing during the Second World War, and others – such as the Oval cricket ground in south London – were used as prisoner of war camps.  Lord’s, however, escaped almost unscathed, and continued to host cricket matches throughout the war.  The only casualty was Father Time, which became entangled in the steel cables of a barrage balloon and was bent out of shape and dislodged from its perch on the old grandstand.

The barrage balloon was an unmanned blimp that was used to prevent enemy aircraft from flying too low, meaning that they were forced to fly at higher altitudes which made them more vulnerable to anti-aircraft fire.  The barrage balloons were unmanned, and were kept in place by cables that were securely attached to the ground.  The barrage balloon that collided with Father Time must have come loose from its moorings and moved over the cricket ground, with its steel cables dangling beneath it.  The weather vane was retrieved and spent the rest of the war safely hidden away in a cellar.

Even before the Second World War broke out, barrage balloons were sometimes known to come free of their moorings and land in unexpected places, sometimes causing quite a bit of damage.  A report in the Nottingham Evening Post on 31st July 1939 describes an incident where a barrage balloon damaged a house in Charlton, south east London.  The balloon damaged phone lines and dislodged the guttering on the house during its descent – fortunately, the occupants of the house were unhurt.

Father Time’s iconic status meant that its restoration to the Grandstand in 1946 was reported in the media, even as far away as Australia.  The newpspaer cutting pictured below comes from the Townsville Daily Bulletin, a newspaper based in Queensland.

This wasn’t the last time that Father Time was in the wars, though.  In 1992, it was struck by lightning.  Its repairs were chronicled on the children’s TV programme Blue Peter.  The Grandstand it was situated on was demolished in 1996, but Father Time was retained and moved to its current position on the Mound Stand.  In March 2015, the weather vane was severely damaged again, when high winds damaged the figure of Father Time, forcing it to be taken down and repaired.  Like in 1946, its return to the stands was covered in the media in June 2015.

Unmanned blimps, not dissimilar to the old barrage balloons, can still be seen in the sky around Lord’s during big matches.  Rather than protecting London from low-flying enemy bombers, these modern blimps are used for advertising and have cameras on board that provide excellent bird’s-eye views of the cricket ground and the surrounding area for television audiences.  Luckily for Father Time, none of them have (so far) come loose from their moorings to menace the famous weather vane.