Nestled between pubs, restaurants and the hospital buildings of St Bart’s on West Smithfield is a Tudor gatehouse.  During the week office workers, hospital staff and the traders of nearby Smithfield Market hurry past this structure without giving it a second glance, but groups of people on guided tours usually stop outside this rather incongruous site.  The gatehouse marks the entrance to the City of London’s oldest parish church, St Bartholomew the Great, a rare survivor from the Great Fire, albeit much changed from its early years. 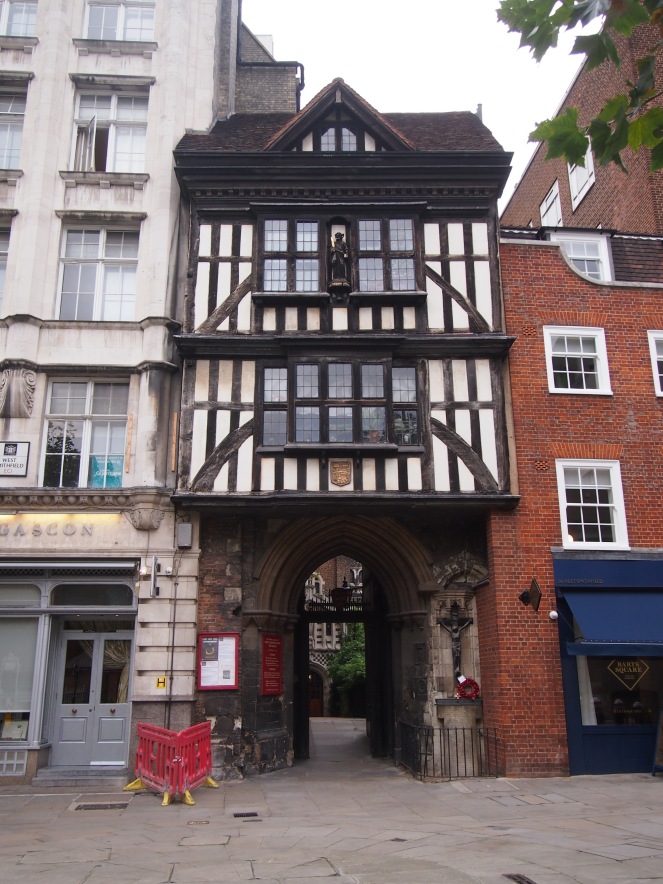 The gatehouse stands on the site of what was once the grand frontage of the priory church of St Bartholomew the Great, the earliest parts of which date from 1123.  If you approach the old church from the east, walking down the ancient thoroughfare of Cloth Fair, you can see what a strange patchwork of materials and architectural styles the church’s exterior is.  Very little of this exterior is original, and much of it betrays the number of alterations this building has undergone over the years.

The confusing outward appearance of Great St Bart’s is partly due to the fact that over the years parts of the site have been used for secular enterprises, such as workshops and schools.  These days, churches tend to occupy spaces slightly separate from nearby buildings, but in the past many urban churches existed cheek by jowl with the local community.  Houses and industrial premises were sometimes built onto the sides of churches, and sometimes parts of the church itself would be converted for other uses – often as a way of raising money to keep the church running.  Even the venerable old Westminster Abbey was once closely surrounded by houses and shops – something that’s quite hard to believe or imagine today.

The church today is only half the size it would have been before the Reformation.  The rather humble looking gatehouse was once the site of the front of the church, but after the Priory of St Bartholomew was dissolved in 1539 the nave of the church was demolished.  The tower pictured below dates from 1628 – records survive of the parishioners who donated money for the tower’s construction.

This strange old church has survived so many disasters over the years – it avoided total demolition after the Reformation, survived the Great Fire of London (which burnt out at nearby Pye Corner) and also survived the air raids of two World Wars unscathed, despite the adjacent Bartholomew Close being devastated by a Zeppelin raid in 1915.

Stepping inside the church seems to transport the visitor into another time and place altogether. 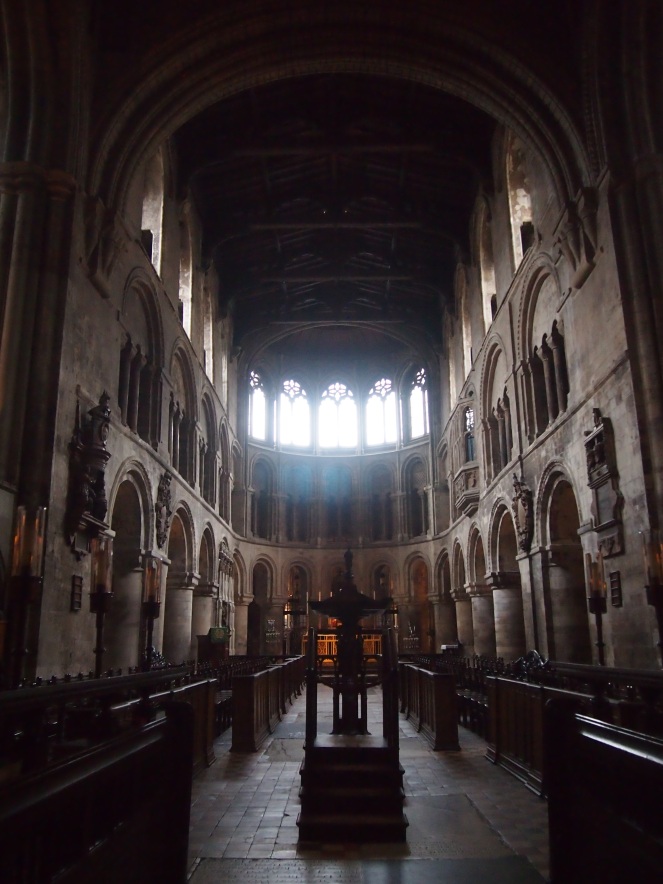 One reason why the interior of the church feels so unexpectedly huge is that the floor level is several feet below the level of the surrounding streets.  In fact, “unexpected” is quite a good way to describe Great St Bart’s.  The oddly patchworked exterior gives no hint of the stunning Romanesque interior, with its characteristic round arches and sturdy pillars.  It’s a rare sight in London; indeed, Great St Bart’s is reckoned to be the best preserved and finest Romanesque church interior in the city. Before the Reformation, this stunning interior was brightly painted – when the church was restored in the 19th Century evidence was found that the stonework was once painted in bands of red, black and yellow.

The history of this incredible church dates back the 1100s, and to a courtier called Rahere.  Rahere was a favourite at the court of Henry I (reigned 1100-1135), and after falling dangerously ill whilst on pilgrimage to Rome had a vision of St Bartholomew, who told him to found a hospital.  Rahere recovered, and when he returned to London and founded a hospital and an Augustinian priory in 1123, he dedicated them to St Bartholomew to give thanks for recovering from his illness.  St Bartholomew’s Hospital, which is still going strong today, is the oldest hospital in Europe and still occupies its original site.  As for Rahere, he became the first prior at St Bartholomew the Great and remained in this role until his death in 1144.

Rahere’s tomb, surrounded by splendid Gothic ornamentation, is a prominent monument in the church. 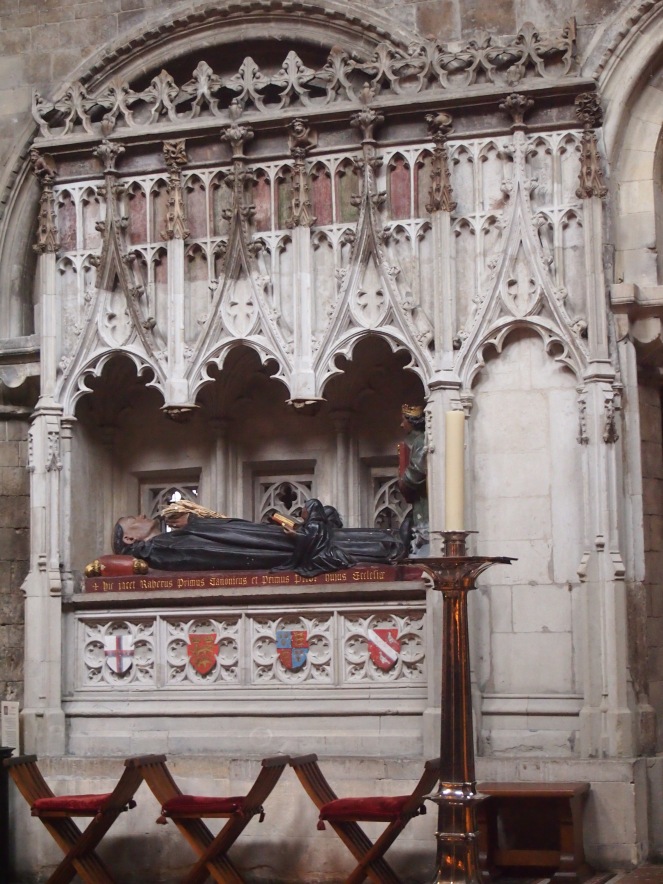 The 1820 image shown above shows a feature of the church that is entirely out of place, architecturally speaking.  The oriel window, which was installed in the early 1500s on the orders of the then prior William Bolton, is decorated with with a crossbow bolt going through a barrel, or tun – a play on the prior’s name.

Although parts of the church survived the Reformation, Great St Bart’s went into decline after the 16th Century and the remaining parts of the building fell into disrepair, or were turned into houses or business premises.

Like so many ancient churches, Great St Bart’s underwent significant restoration during the Victorian period.  The current Lady Chapel dates from the 19th Century – previously, the Lady Chapel had been used as a secular building since the Reformation.  Prior to restoration work in 1885, this part of the church had been occupied by a fringe-maker, and “as all efforts to induce him to relinquish possession failed, his factory had to be supported by an iron girder upon iron columns placed within the sanctuary” (source). 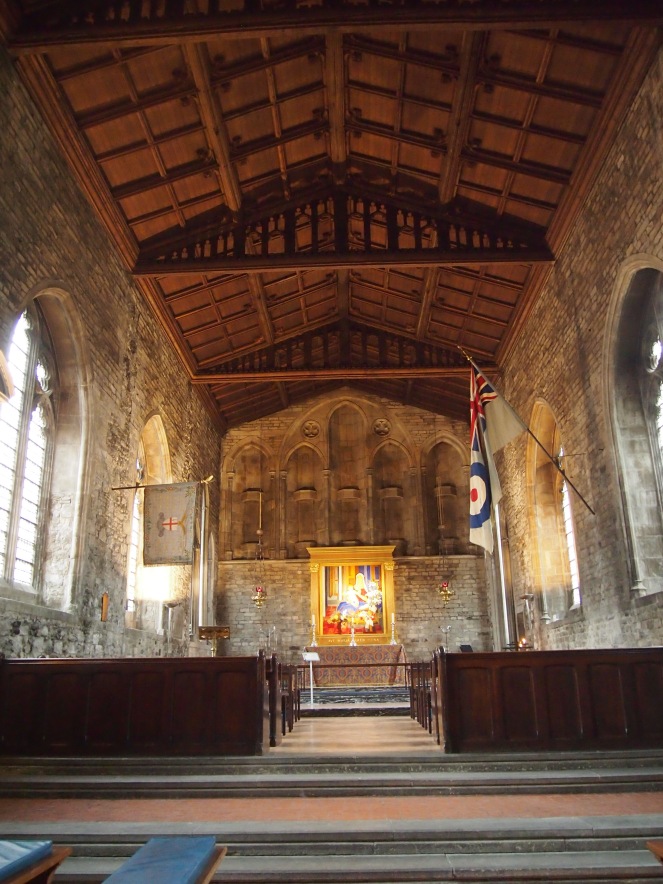 The many monuments and gravestones that survive in the church tell the stories of some of St Bartholomew the Great’s parishioners.

The altar tomb pictured above commemorates a politician from the time of Elizabeth I, Sir Walter Mildmay, and his wife Mary.  Sir Walter served as Chancellor of the Exchequer from 1566 until his death in 1589.  He was also the founder of Emmanuel College, Cambridge, and his wife Mary was the sister of the Elizabethan spymaster Francis Walsingham.  The tomb, which is decorated with heraldic badges and images, was restored in the 19th Century by Henry Bingham Mildmay.

Another individual with connections to royalty is Ellis Yonge, who worked in the office of the King’s Remembrancer in the 17th Century.  Interestingly, his monument describes the date of his death – 1659 – as being in the “eleventh yeare of his Majsesties Raigne”.  In 1659, England was still under the Commonwealth, with Richard Cromwell being Lord Protector, but whoever chose the inscription on Yonge’s memorial plaque clearly had Royalist sympathies and considered Charles II to have been king since the execution of his father Charles I in January 1649.  I can’t help but wonder whether this memorial was erected before or after the Restoration of Charles II – surely, such a monument being created during the Commonwealth would have been a bold and perhaps dangerous move.

The grave slab above allows us to trace a little of the life of one Rachel Edwards.  Two of her children are recorded on the grave, Sarah and Henry, and her first husband Oliver.   Her second husband William Jones was then buried in the same grave in 1755, before Rachel finally joined her family in the vault in 1757 aged 66. 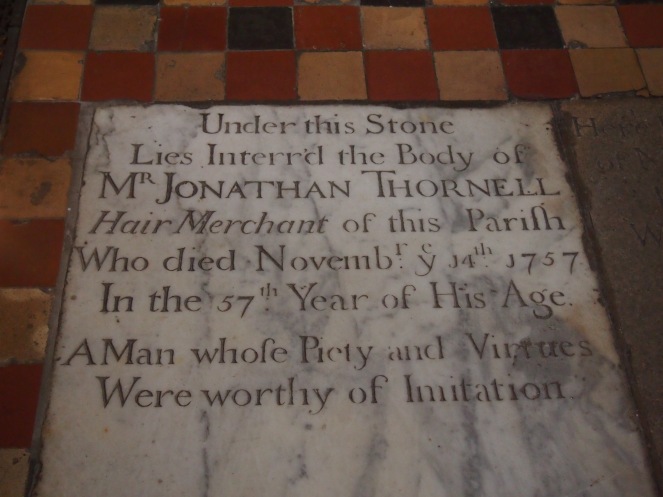 Jonathan Thornell, whose grave is pictured above, was a hair-merchant – he would have supplied the hair for the making of the wigs that were so fashionable in the 18th Century.

The striking architecture of Great St Barts, coupled with its location in a area that’s very quiet at weekends, has made it an attractive location for filming.  Probably most famously, it is featured as the location of the fourth wedding in the 1994 film Four Weddings and a Funeral. 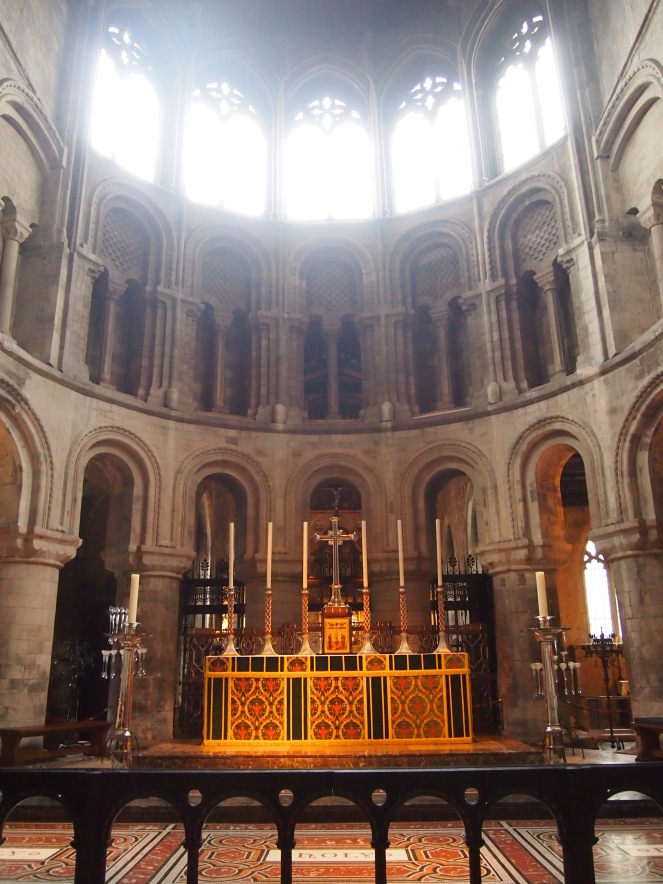 St Bartholomew the Great is associated with a number of the City’s many livery companies, including (rather fittingly, given the proximity of the meat market at Smithfield) the Worshipful Company of Butchers, the Founders’ Company, and the Fletchers’ Company, as well as more modern livery companies such as the Information Technologists’ Company.  These companies hold services at the church and their members are often present at major events at Great St Bart’s.

There is a small entrance charge to visit St Bartholomew the Great, but it’s well worth it.  I spent a good couple of hours exploring the church – talking to the verger, reading inscriptions on monuments and enjoying the beautiful architecture and peaceful atmosphere.  This church has seen so much history, and so much change – the fact that it survived both the Reformation and the Great Fire of London makes it a really precious part of the City of London’s history.

The History of St Bartholomew the Great http://www.greatstbarts.com/Pages/Church/history.html

Rahere, Founder and First Prior of St Bartholomew’s Priory and Hospital http://www.raheresgarden.com/rahere.html

14 thoughts on “St Bartholomew the Great: a Romanesque gem in the City”