Many of London’s big Victorian Cemeteries have suffered over the years.  Originally set up and run by private companies, many of these companies ran into financial difficulties after the Second World War, effectively abandoning cemeteries or selling them cheaply to local authorities.  As a result, these cemeteries became overgrown and vandalised.  Tower Hamlets, one of London’s “Magnificent Seven” Victorian cemeteries, was one of places that found itself derelict and unloved in the late 20th Century.  Thankfully, today all of that has changed.

Opened in 1841, Tower Hamlets Cemetery served London’s East End.  Due to its location in Bow, it has often been referred to as “Bow Cemetery” by locals.  Like many large cemeteries opened around this time, it contained a consecrated section for Anglican burials and an unconsecrated section for Nonconformist burials.

Sections of ground were also set aside for “public graves” – large graves where several unrelated people could be buried.  Some of these graves were huge – up to forty feet deep, and big enough to fit thirty bodies in them.  These graves were intended for those who were unable to afford a private grave plot, and at Tower Hamlets, situated among many poor working-class districts of the East End, a large proportion of burials took place in the public graves.  Within two years of the cemetery opening, 60% of burials were in public graves, and over the years the proportion rose to 80%. 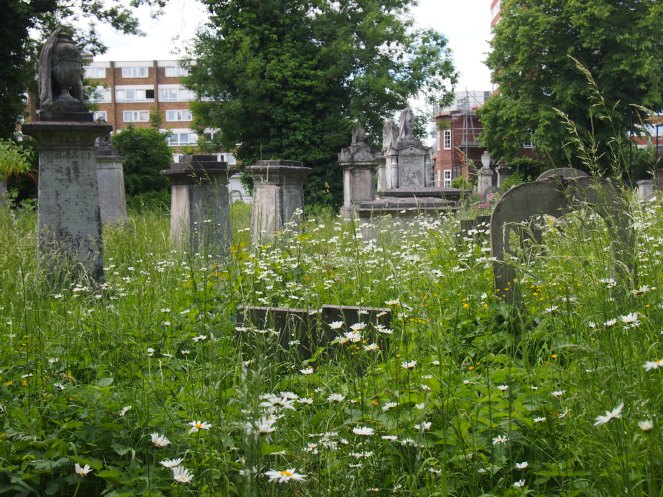 The number of burials that took place at Tower Hamlets in its first fifty years is quite staggering.  By 1889, almost a quarter of a million people had been interred there.

People from all walks of life were laid to rest at Tower Hamlets: music hall stars, teachers, engineers, trade unionists and merchants.  There are fewer grand memorials to be found here than at places like Kensal Green, reflecting the mostly working-class make-up of the neighbourhood Tower Hamlets Cemetery was situated in. 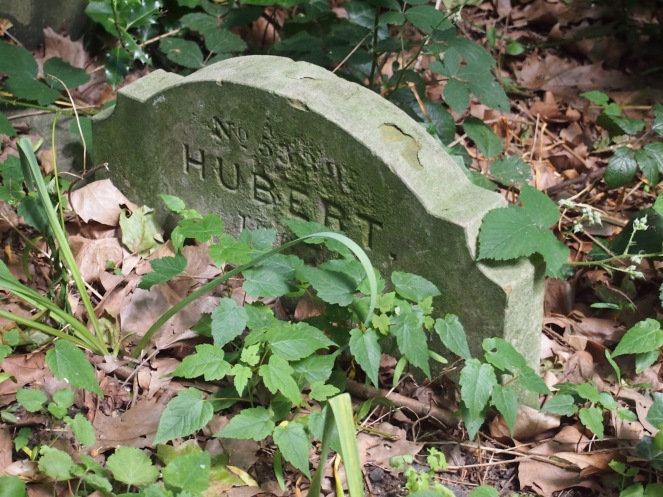 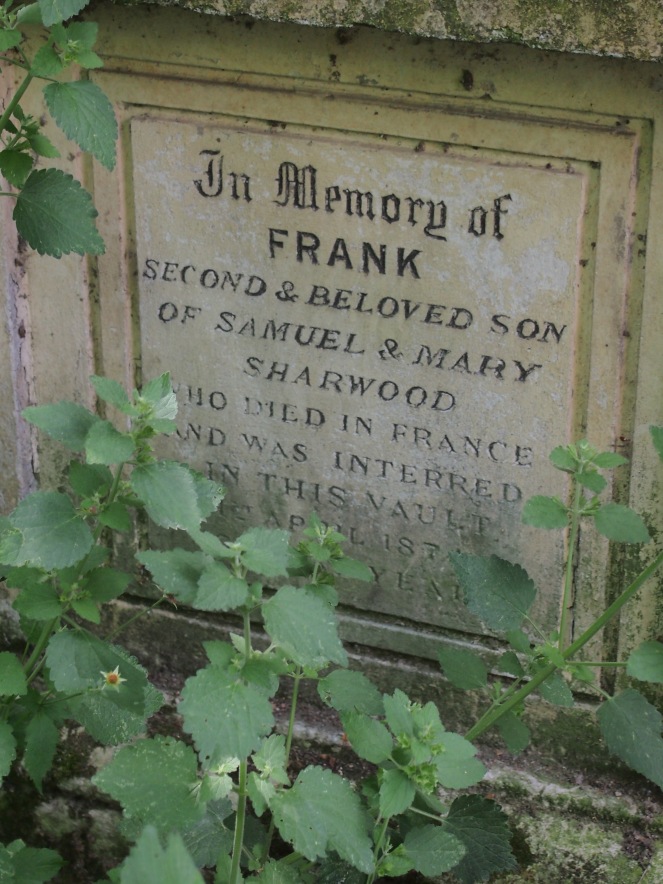 A much-loved local politician was buried at Tower Hamlets in 1921.  Will Crooks served the people of Poplar as a member of the London County Council and chairman of the Poplar Board of Guardians.  Crooks had had a tough start in life – his father lost an arm in an industrial accident when Will was just three years old, and his mother struggled to support their large family.  Will and some of his siblings had to spend some time in the workhouse, a difficult time which later inspired Crooks to campaign for better conditions in workhouses.  As an adult, Crooks became involved in trade unionism and played a prominent part in the 1889 London Dock Strike.  A gifted orator, he went on to become mayor of Poplar in 1900, and later became MP for Woolwich (an excellent post about Crooks’ achievements in South London can be found on Running Past).  He remained an MP until shortly before his death in 1921, and the inscription on his grave shows the affection he was held in. 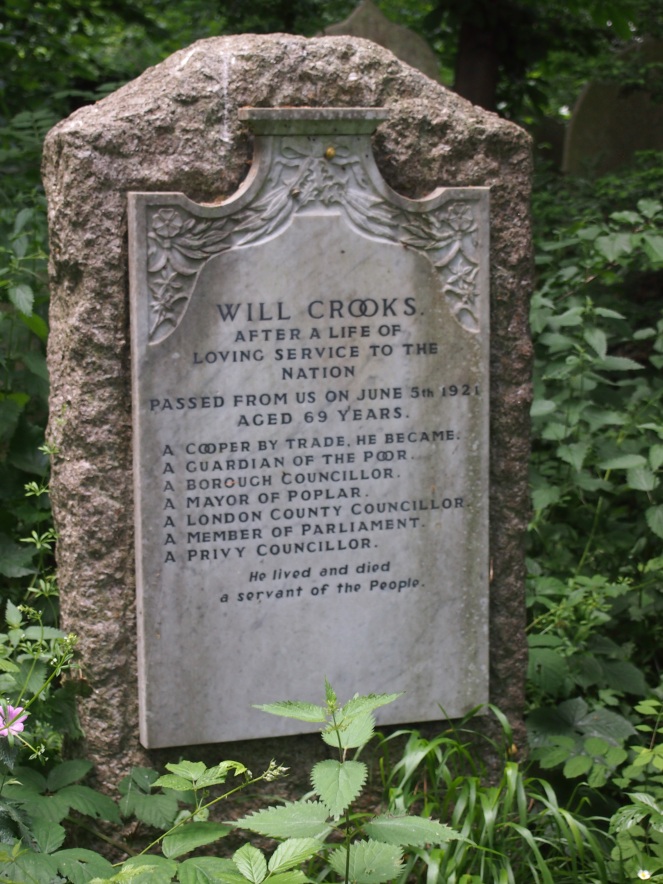 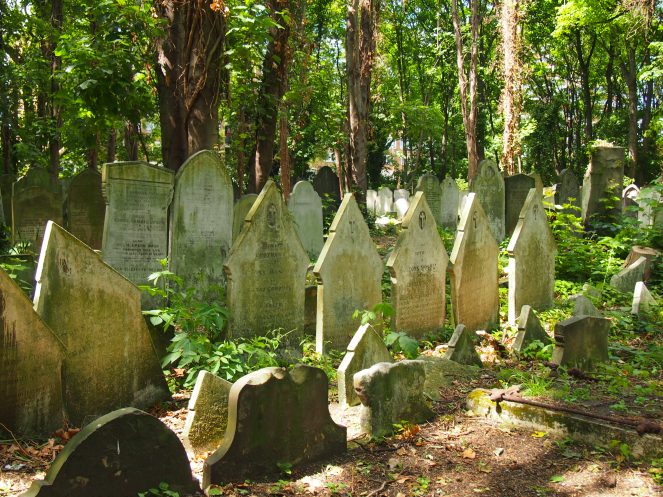 A modern war grave marks the previously unmarked burial place of an early Victoria Cross recipient.  Major John Buckley was serving in the Bengal Army, a part of the East India Company, in Delhi when rebellion broke out in 1857.  With eight others, Buckley defended an ammunition storehouse for many hours, finally blowing it up rather than letting the explosives fall into the hands of mutineers.  He was awarded the Victoria Cross, the highest honour for gallantry, “for gallant conduct in the defence of the Magazine at Delhi, on the 11th May, 1857.”  Tragically, after being released from captivity, he discovered that his wife and children had been murdered by the rebels.  Originally from Stalybridge in Cheshire, Major Buckley died in London at the age of 63 in 1876. 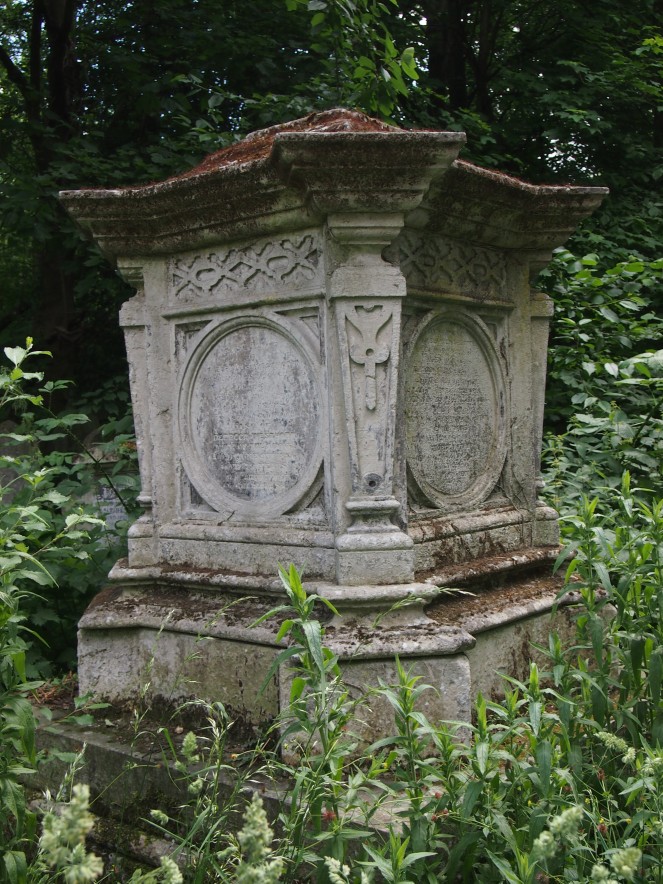 Even by the end of the 19th Century, Tower Hamlets Cemetery was overcrowded, untidy and falling into disrepair.  Five bombs fell on the cemetery during the Second World War, shattering the two chapels on the site and damaging memorials.  However, burials continued until the 1960s, when the cemetery was sold to the Greater London Authority.  In 1966, the cemetery was officially deconsecrated by an Act of Parliament and no further burials took place there. 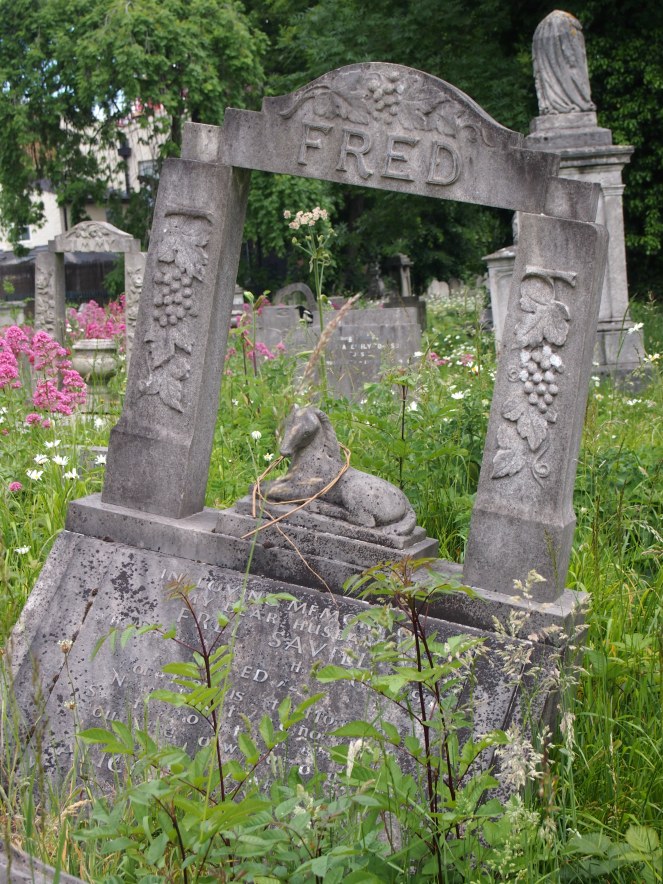 The Greater London Authority planned to make the cemetery into a park, and the cemetery’s bombed-out chapels were demolished and many gravestones cleared.  However, a lack of funding and strong opposition from local people brought this work to a halt and the cemetery became overgrown and derelict, no longer used for burials but not yet suitable to be used as a park.

In 1986, following the abolition of the Greater London Authority, Tower Hamlets Borough Council took control of the cemetery and in 1990, the Friends of Tower Hamlets Cemetery was formed.  The Friends came to be because local residents were concerned at the poor state of the cemetery and wished to do something about its neglected state.  Gradually, the Friends began to transform the overgrown cemetery into a pleasant green space with clear paths and benches, where local people could relax and enjoy the peace. 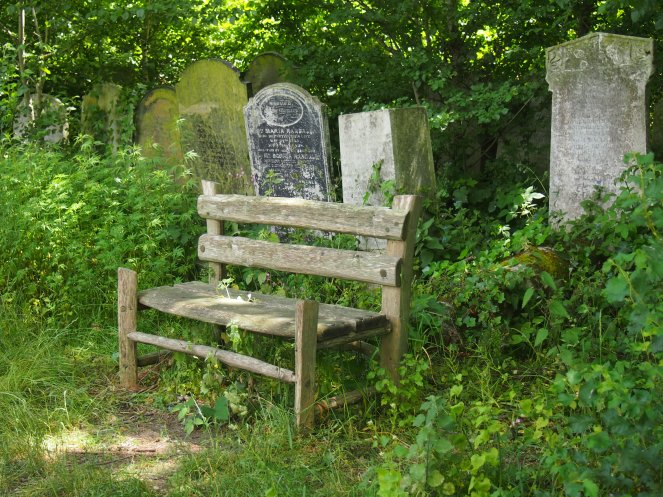 Tower Hamlets Cemetery Park was designated as a Local Nature Reserve in 2000, due to the area’s rich biodiversity.  Many wild plants and flowers grow among the graves, and many birds, butterflies and moths, insects and mammals call the old cemetery their home.  Some of the species found in the Cemetery Park, such as the tiny Small Blue butterfly, are quite rare.  While visiting I saw at least six different species of butterfly, including the beautiful yellow Brimstone. 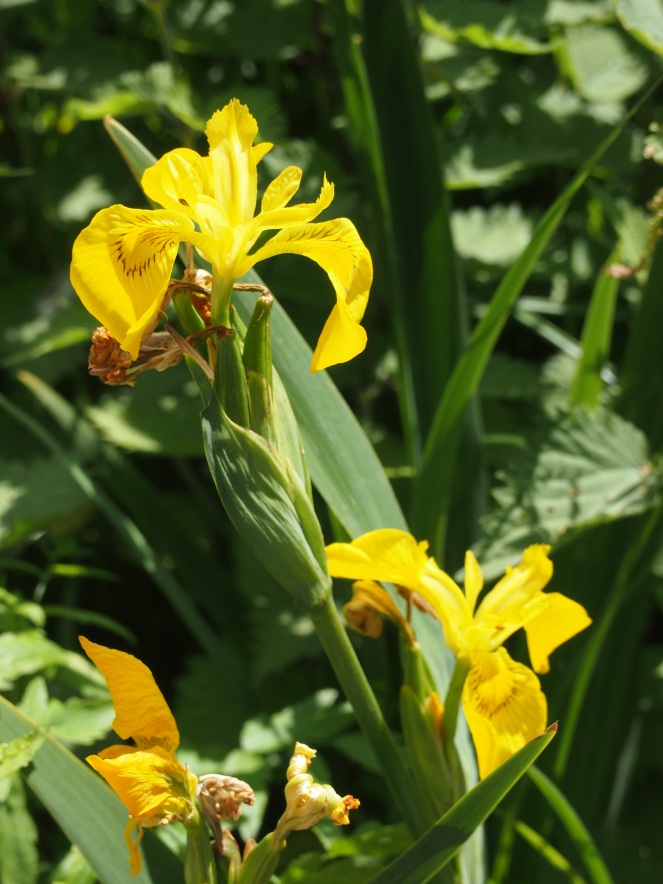 The Soanes Centre was opened near the Southern Grove entrance to the cemetery in 1993.  This facility caters for children of all ages and provides workshops where children and young people from local schools can explore the vast array of plant and animal life present in the cemetery.  Thousands of schoolchildren benefit from the work of the Soanes Centre each year – rather like the old Nature Study Museum at St George in the East, the centre gives children and young people living in built up inner city areas to explore and interact with nature. 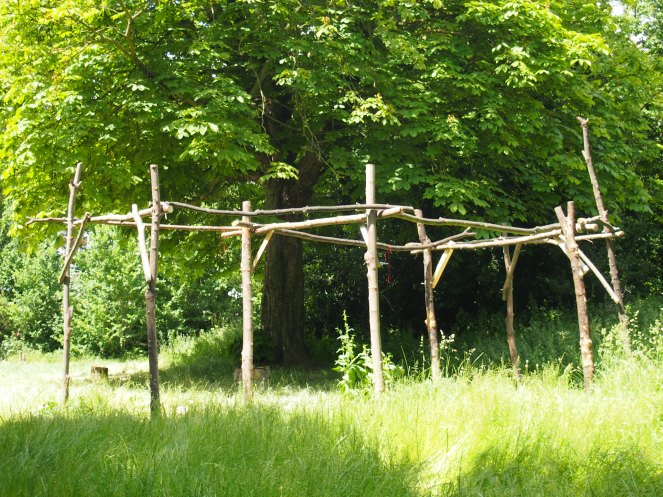 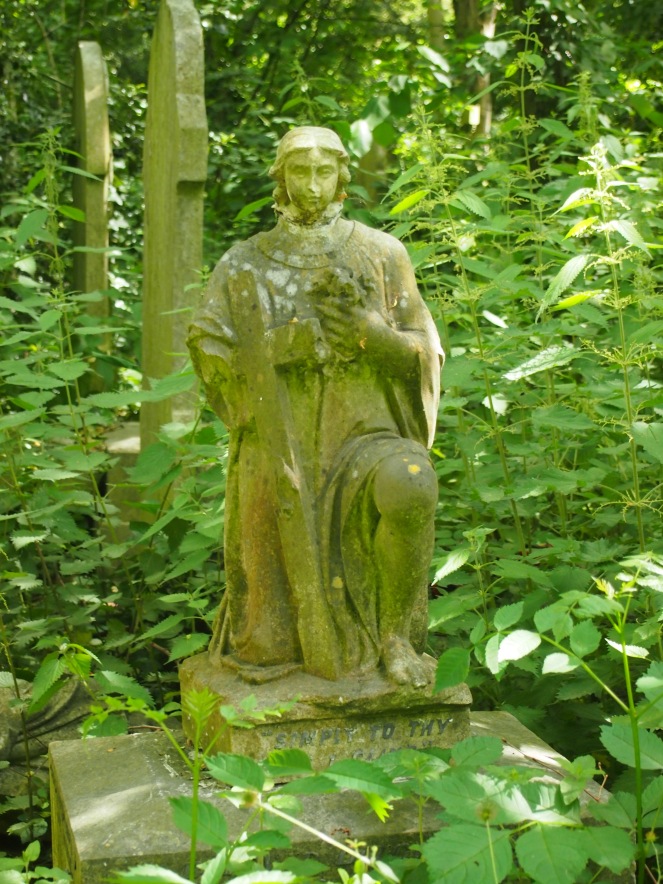 Today, Tower Hamlets Cemetery Park is thriving.  Activities taking place there range from woodworking to art classes, wildlife walks to recording inscriptions on graves.  This summer, the Cemetery Park will once again host the Shuffle Festival, an arts festival that raises funds for local community projects.  The park’s past as a burial ground is respected, researched and celebrated, and the Friends of Tower Hamlets Cemetery Park have transformed a sad, derelict space into a place for education, remembrance, relaxation and leisure. 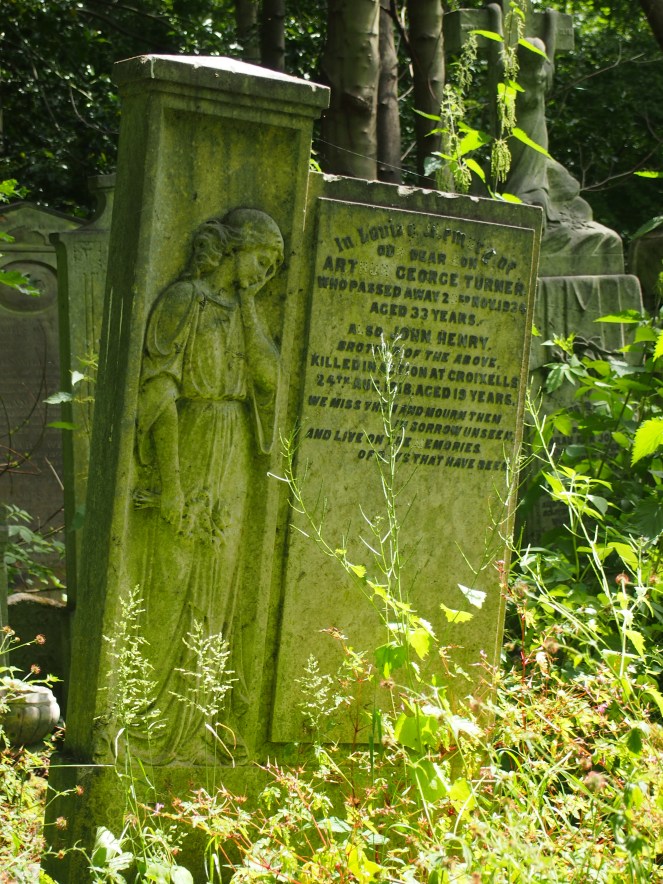 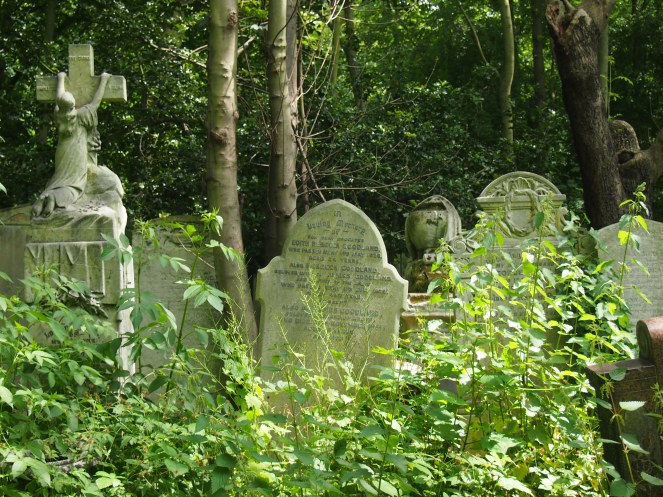 10 thoughts on “Tower Hamlets: a neglected cemetery reborn as a nature reserve”