I visited the Lune Valley again recently, that picturesque corner of Lancashire that I’ve found to be rich in history and fascinating old churches.  This visit was no different – driving into the village of Hornby, a striking octagonal church tower caught my attention.  Stopping to explore this church and the church situated opposite uncovered the stories of two men with strong links to Hornby who both made their mark on history. 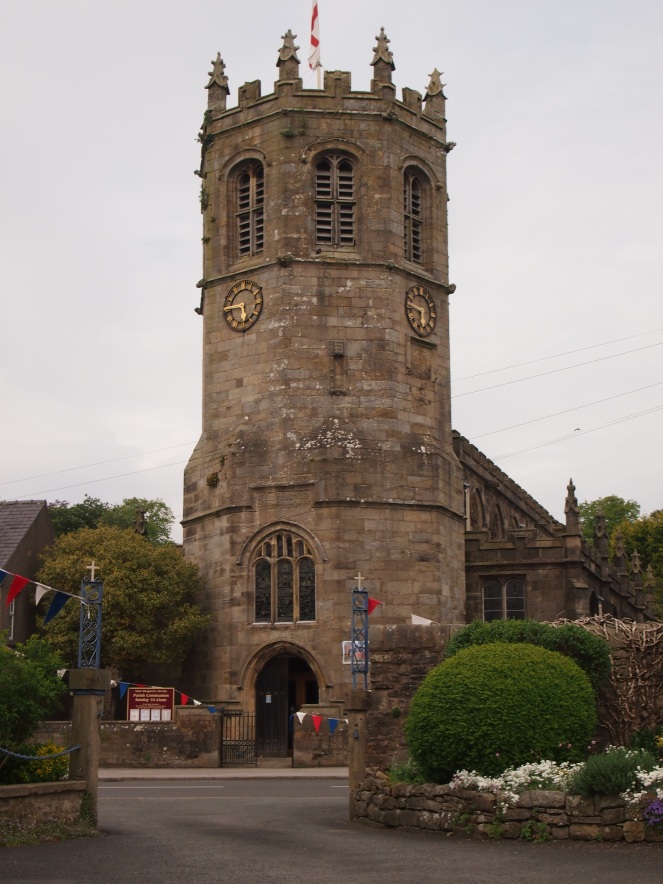 The octagonal tower of the church of St Margaret dominates the village of Hornby.  A church has existed on the site since the 14th Century, but the imposing tower dates from about 1514.  Carved stone gargoyles leer down at visitors from the tower.

An inscription on the tower mentions Edward Stanley, a son of the Earl of Derby who became lord of Hornby Castle by marriage and commissioned the church tower to be built in the early 16th Century. 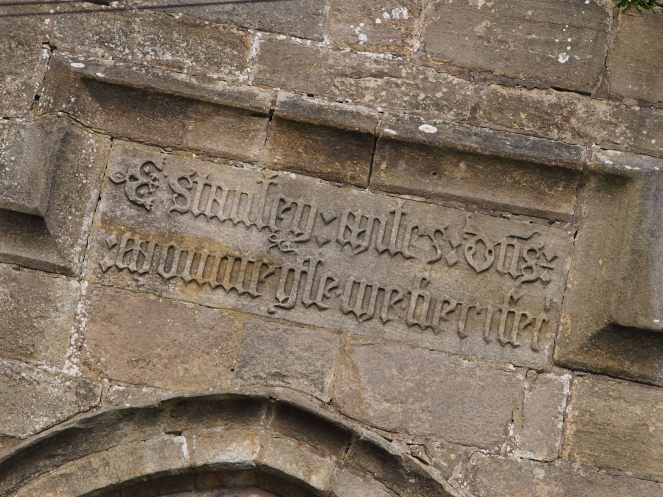 The rest of the church building was remodelled in the 19th Century by architects Paley and Austin, who restored a large number of churches, particularly in Lancashire. 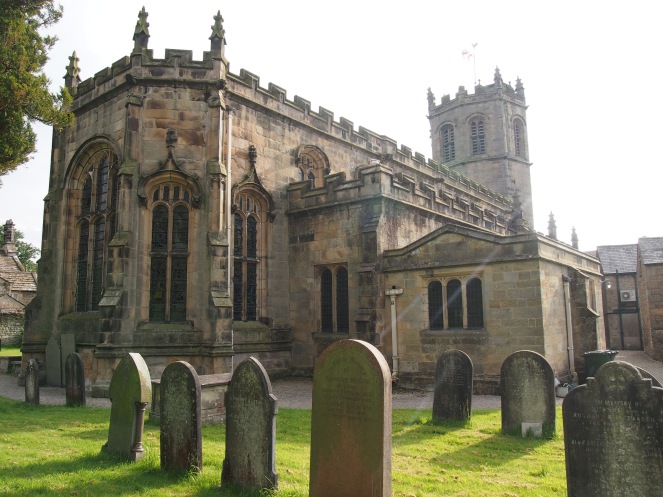 When we visited, the church was hosting an exhibition about a local man who played a part in one of the most famous episodes in England’s history, the sealing of Magna Carta by King John in 1215. (Appropriately enough, we visited on 15th June, the 700th anniversary of the sealing of Magna Carta).  Roger de Montbegon, a member of a family who had been granted land in Lancashire and Lincolnshire after the Norman Conquest, held the barony of Hornby and was one of the “Twenty Five”, a group of barons who were appointed as sureties to Magna Carta, a document which sought to protect the rights of barons and the church, and limit the power of the Crown.

Roger’s relationship with King John was complex – when Richard I was being held captive on his way back from crusade, Roger had supported John’s attempt to wrest power from William Longchamp, who had been appointed by Richard to govern England during his absence abroad.  Roger’s part in this rebellion led to the confiscation of his lands, although he was later to regain them when he found favour at court again.  However, by the time that John’s barons revolted against him in 1215, Roger chose to side with the barons against the king.

Roger’s involvement with Magna Carta was as one of the sureties of the document.  The twenty-five sureties of Magna Carta were named as the enforcers of the document; however, within just a few weeks of the sealing of Magna Carta and the pledge of allegiance from the barons, civil war had broken out once again.  Within a year the Pope had declared Magna Carta null and void and John had died of dysentery, but John’s successor Henry III issued a number of revised versions of Magna Carta that were eventually adopted into the statute roll in 1297.  As for Roger, he abandoned his role as a surety for Magna Carta after a few months, and Roger de Mowbray was installed in his place.

It’s difficult to get a real feel for the man that Roger de Montbegon was from the vague sketches of his life that survive.  He switched allegiances a number of times during his life, suggesting that he might have been a scheming figure who chose the side most likely to protect him or be of benefit to him, but sadly we have no definitive evidence for what motivated him to choose one side over another at different times.  His role in the Barons’ Revolt and later the civil war following John’s rejection of Magna Carta lost him his estates, and he seems to have spent much of the rest of his life (he died in 1226) trying to regain them.  He died without a son to succeed him and was the last of the de Montbegons to hold the barony of Hornby.

The de Montbegon family are thought to have founded Hornby Priory, a small monastic house dedicated to St Wilfrid.  Some medieval gravestones found at the site of priory (which was dissolved in 1538) are now kept in the church tower at St Margaret’s.  Most are decorated with carved crosses, but one – very likely the grave of a warrior – is adorned with the images of a large knife and a sword.  Although the design is simple and plain, it reminded me of the long swords carved onto the graves of lords and warriors buried on Iona. 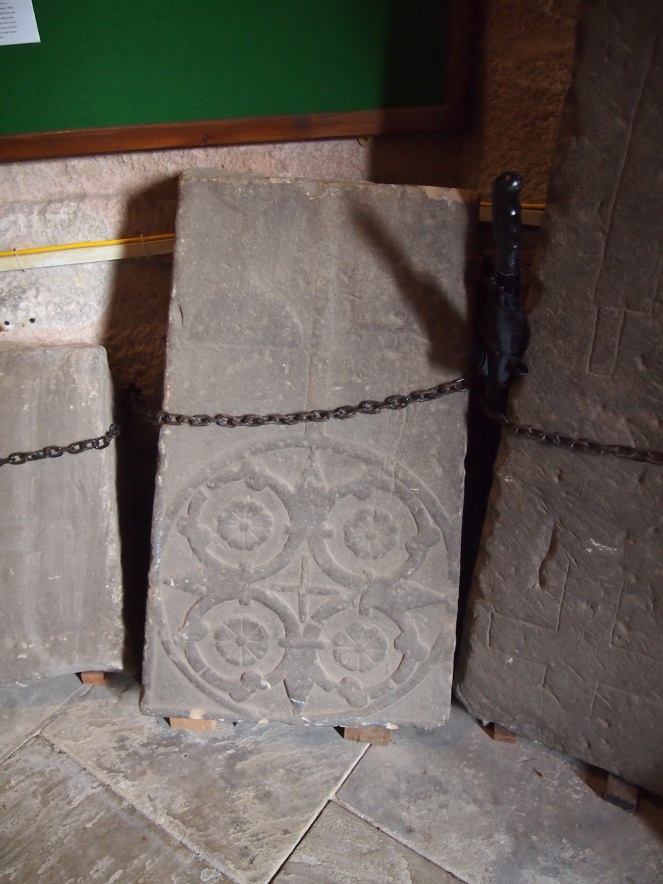 The fragment of a carved stone cross, thought to date from the 9th Century, was also found at the site of the priory.  Two figures with halos around their heads stand on either side of what looks like a crucifix, while at the bottom of the fragment five loaves and two fishes are carved, a clear reference to the miracle of the feeding of the five thousand. 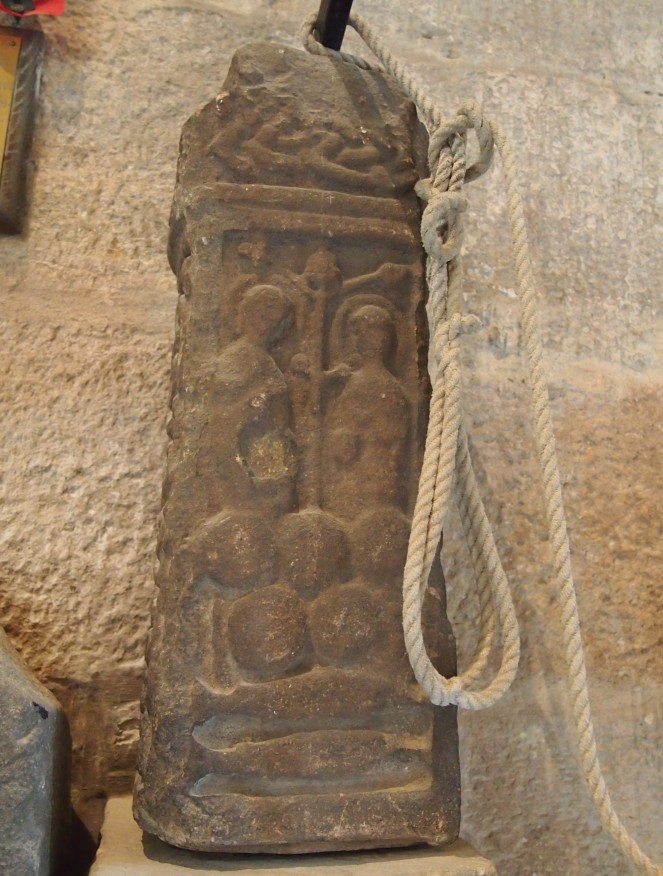 Across the road from St Margaret’s is another church, a more modest structure dedicated to St Mary and set up to serve Hornby’s Catholic population.  Its entrance is flanked by modern-looking busts of Constantine and Oswiu, two important figures in the early spread of Christianity in the British Isles.  In the mid-18th Century, a wealthy widow named Anne Fenwick had Mass said in her home at Hornby Hall (a building now long gone that was situated close to the site of the church), and after her death in 1777 she left instructions that a church be built for local Catholics.  The current building dates from 1820. 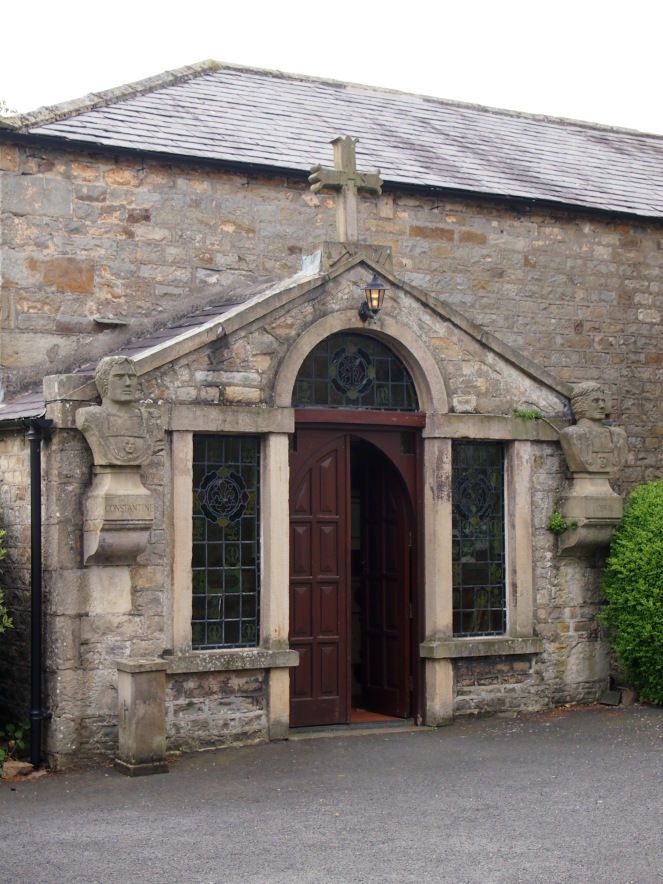 The interior of the church is simple and peaceful, looking in many ways more like a nonconformist place of worship than a typical Catholic church.  At the time it was built, Catholics had not yet achieved legal emancipation – the Roman Catholics Relief Act of 1791 had given Catholics some rights, such as the right to worship freely and to have their own schools.  Laws dating from the 16th and 17th Centuries, such as those that made it illegal for Catholics to hear Mass and forced Catholics to renounce the authority of the Pope, had been gradually repealed over the course of the 18th Century, but anti-Catholic sentiment remained widespread and Catholic communities tended to keep a low profile.  This probably explains the modest, simple nature of St Mary’s – unlike the eye-catching structure of St Margaret’s across the road, St Mary’s doesn’t really look like a church from the outside and it does not have features often associated with 19th Century Catholic churches such as stained glass and pointed arches.

One of the few adornments in this tranquil little church is a memorial to a well-loved priest, John Lingard, who oversaw the building of the present church in 1820 and was also a distinguished historian. 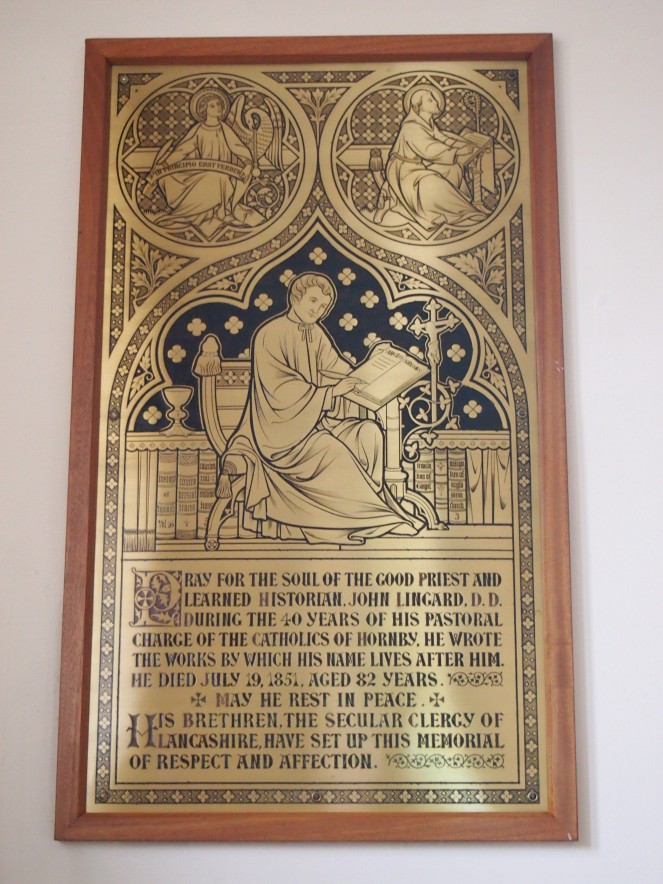 Dr John Lingard was born in Winchester in 1771, but spent most of his adult life in Hornby.  After beginning his studies in France, he returned to England and taught philosophy before becoming the parish priest at St Mary’s, Hornby, in 1811.  He was to remain in Hornby until his death in 1851; he was a gentle, quiet and studious man who was well-loved by the local people – so much so, that as well as the memorial pictured above, another memorial to him was installed in the Anglican church of St Margaret’s.

The first three volumes of what would become an eight-volume History of England were published in 1819, and were very well received.  Rosemary Mitchell comments that at the time Lingard’s History was published, “Catholic writers of history faced an audience potentially more hostile than that met by women historians; like women historians, they aimed to subvert, adapt and revise the dominant historical discourse.” (Picturing the Past, p.170)  This dominant historical discourse was a view of history biased in favour of the Establishment Anglican church.  However, the fact that Lingard’s History was published by Joseph Mawman, a Protestant publisher, is testament to the measured and impartial approach Lingard took to writing his history, an approach that was extremely novel at the time. 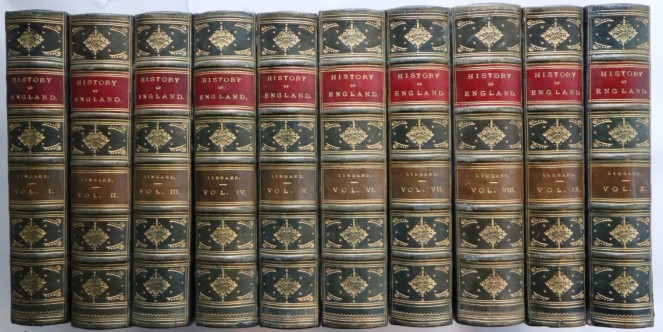 John Lingard placed a big emphasis on the evaluation of historical sources; rather than relying on histories written by others, he sought to use primary sources as much as possible and ranking sources in terms of their authority and reliability – an approach that will be familiar to historians working now, but one that at the time was quite radical.  The considered, impartial nature of Lingard’s work helped to rehabilitate the reputation of Catholics in Britain,  showing that it was possible for them to participate in intellectual life without being biased by their religious convictions.  This was part of a wider surge in confience among Catholics in England as they campaigned for empancipation, something that was finally achieved in 1829.

Lingard’s History of England started out as a text aimed at other scholars, but over the years became one of the most popular histories published in the 19th Century.  Lingard revised the work a number of times, and the History was expanded to ten editions, covering the period from the Roman conquest to the beginning of the reign of William III.  Although Lingard did not reveal his vocation as a priest in his book, he was nonetheless awarded a triple doctorate by Pope Pius VII.  William Cobbett, a vocal supporter of Catholic emancipation, was a great admirer of Lingard’s work, using the History as a reference source for his own History of the Protestant Reformation.

Lingard isn’t such a well-known figure today, but his hymn “Hail Queen of Heaven, the Ocean Star” is still very popular.  Although his History was largely superseded by other works by the end of the 19th Century, Hornby has not forgotten the man who was so well-respected in their community.  An oak tree he planted in the attractive garden behind St Mary’s is still known as Lingard’s oak, and leaflets and posters on display at the church speak warmly and proudly of its most illustrious son.

7 thoughts on “The historian and the baron: tales from two churches in a Lancashire village”