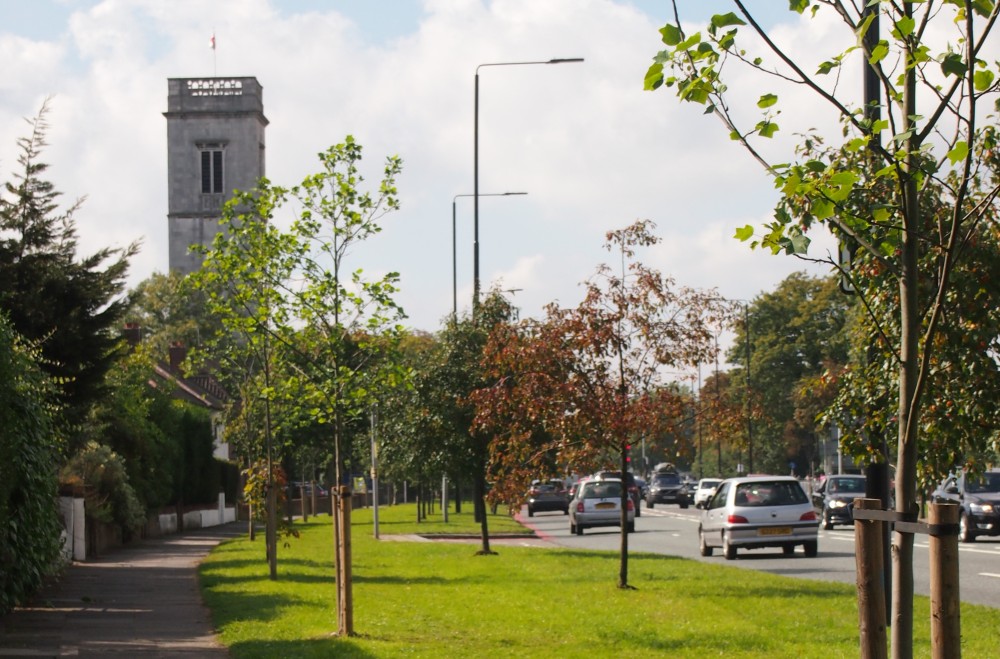 Today, it’s quite difficult to comprehend why a number of Christopher Wren’s beautiful baroque churches were pulled down in the century leading up to the Second World War, but attitudes towards the preservation of historic buildings were different in the 19th Century.  Admittedly, some of these churches were found to have serious structural problems, but others were demolished following the Union of Benefices Act of 1860, which closed a large number of parish churches in the City of London which were deemed surplus to requirements following the reorganisation and merging of the City’s many parishes. 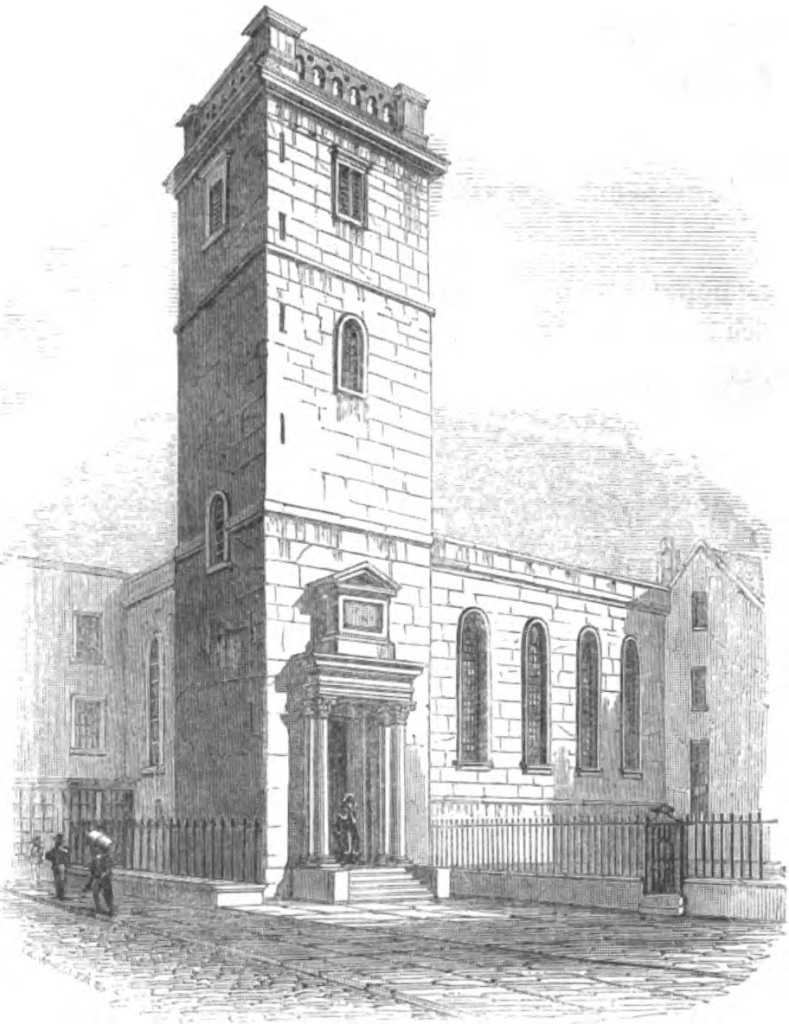 Image of All Hallows Lombard St as it looked in the early 19th Century. From The Churches of London by George Godwin, 1839 (image from Wikimedia Commons)

All Hallows Lombard Street, known as the “invisible church” because it was hemmed in by so many buildings, was one of those churches threatened with demolition.  There had been a church on the site since at least the 11th Century, and following severe damage in the Great Fire of London it had been one of the last churches to be rebuilt to the designs of Christopher Wren, finally being completed in 1694.  After a lot of redevelopment in the area during the 1860s, the character of Lombard Street from being a largely residential area to a street dominated by offices and commercial premises.  It was at this time that the elaborately-carved oak gate at the entrance to the church, with its skulls and hourglasses, was moved inside the building.  This wonderfully macabre creation dates from 1694, the year the Wren church was completed.

By the time that All Hallows Lombard Street was finally condemned in the 1930s, it had already been merged with the parishes of two other demolished City churches – St Benet Gracechurch and St Dionis Backchurch, both of which had been closed and demolished under the Union of Benefices Act.  The bells from St Dionis had even been brought into the tower at All Hallows.  There was opposition to the demolition of All Hallows – in 1936, a pamphlet entitled Should All Hallows Lombard Street be destroyed: the case for preservation was published.  However, it was discovered that there were structural defects in the church’s walls and in 1938 demolition began.

Usually, when a City church was closed and knocked down, the money raised from the sale of the land and church fittings and materials helped to set up churches in newly-developed areas of London that were in need of parish churches.  When this happened, the new churches would be named after the vanished City church that had helped to pay for them.  Examples include St Benet Fink Tottenham and St Dionis Parsons Green.

However, as well as using money from the sale of the church’s site on Lombard Street, the decision was also made to relocate the square tower of All Hallows to Twickenham.  Twickenham had been selected as the location for a new parish church as it was a rapidly-growing suburb of London, and had for some years been served by a mission church – St Martin – which was associated with the parish of St Mary the Virgin in the older part of Twickenham.  All Hallows formed the centrepiece of a brand new parish.  The tower was carefully taken down and rebuilt, brick by brick, at its new location.  Alongside the tower a modern church was built.  Designed by the architect Robert Atkinson, the church’s design was influenced by its baroque predecessor.  The reincarnation of All Hallows was consecrated in November 1940 against a dramatic backdrop of air raid sirens and anti-aircraft fire.

As the picture above shows, many of the fittings from All Hallows Lombard Street also made their way to Twickenham.  The pews, the pulpit and even the organ were transferred, and in pride of place is the beautiful carved altarpiece.  It’s unclear who created this beautiful piece – it bears many similarities to other works by the masterful carver Grinling Gibbons, whose work can be found in other London churches from the same period, but there is no firm evidence to confirm that he is the person who carved it.

Other fittings and decorations in the church give us a glimpse into the church’s history in the Square Mile. including those who helped to fund the rebuilding and refitting of the church after the Great Fire.

Many exceptional 17th- and 18th Century memorial tablets were also moved from Lombard Street to Twickenham.  What a loss these beautiful monuments would have been if they hadn’t have been moved to the new church building.  Instead, the names of some of those parishioners of the old church in the City have been preserved. 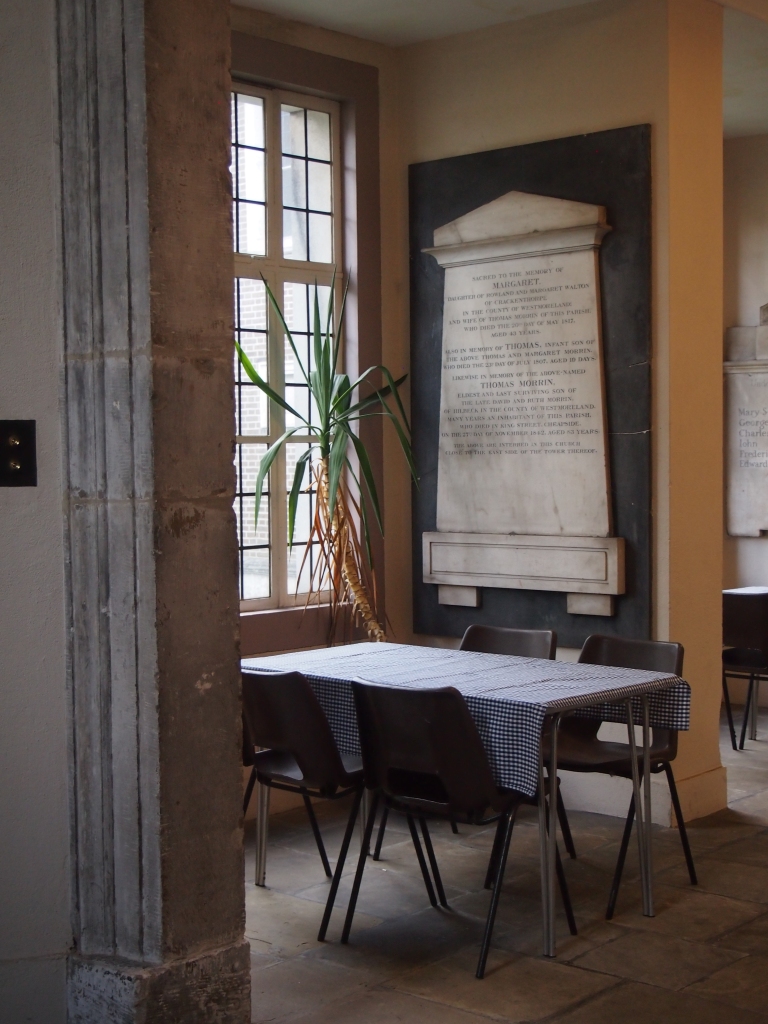 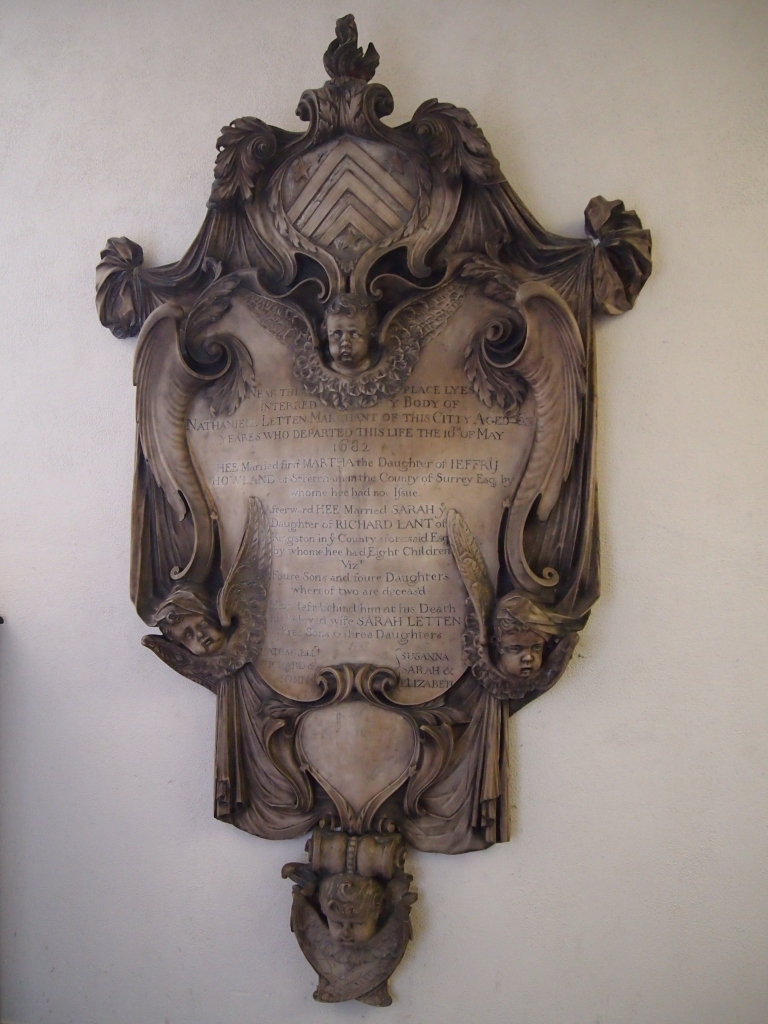 Some of the memorials tell terribly sad stories, such as the Vardon family’s loss of six young children between 1768 and 1779.

Probably the most spectacular monument is that of Dr Edward Tyson, a respected physician who died in 1708 and was buried in St Dionis Backchurch.  Presumably his beautiful marble memorial, carved by Edward Stanton of Holborn, was moved to All Hallows Lombard Street when St Dionis was closed and demolished in the 19th Century.  The detail on the monument is quite astounding – carved fabric and winged putti surround a bust of Dr Tyson himself.

My favourite of the relics from the old church on Lombard Street were the figures of Death and Time, both carrying scythes and situated – rather fittingly – on top of the carved oak gateway.

I visited All Hallows Twickenham during Open House Weekend, and the church was decorated for the Rugby World Cup as Twickenham Stadium is in the parish.  An impressive flower arrangement adorned the 17th Century font that sits in pride of place as you enter the main part of the church.  The parishioners who were there to greet visitors were proud of their church’s unique heritage, and also proud of its place in the community in Twickenham, where it has served local people for 75 years. 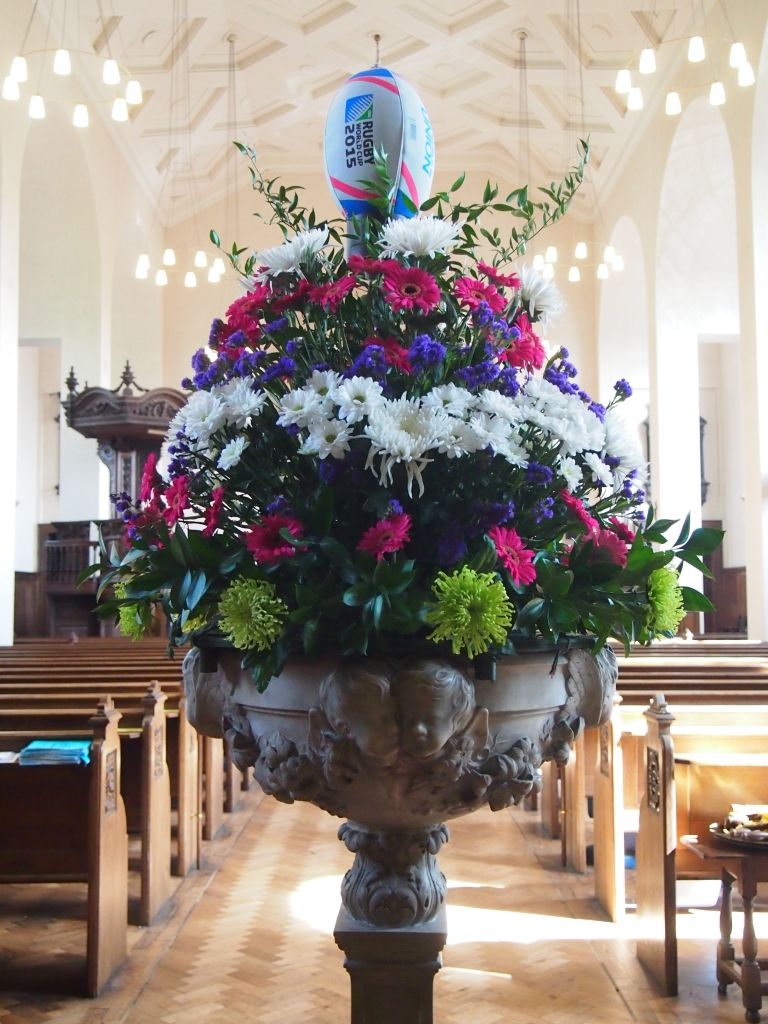 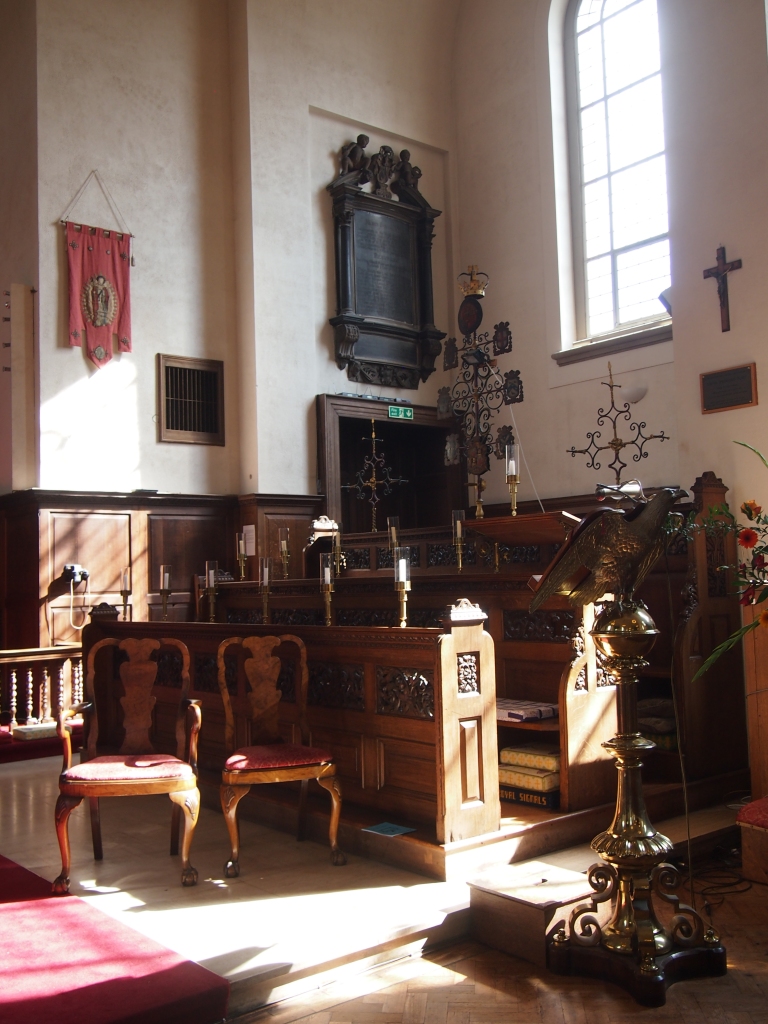 Godwin, George; John Britton – The Churches of London: A History and Description of the Ecclesiastical Edifices of the Metropolis, 1839 (link)