When stepping into the grand entrance hall of Battersea Arts Centre, it’s not obvious that only a few months ago a terrible disaster struck the building.  On a Saturday afternoon in October, the place is bustling.  Families have gathered in one of the rooms for a child’s birthday party; half a dozen buggies are parked on one side of the marble staircase.  Other people sip coffee and tuck into snacks at the centre’s cafe bar.  It all seems like a normal day – business as usual – except for the group of people donning high-visibility jackets and hard hats.  They have come to the centre to see for themselves the devastation left by a fire in the centre’s Grand Hall in March 2015, and to hear about the plans to rebuild the venue that has been at the heart of social and cultural life in Battersea for over a century.

Battersea Arts Centre began life as a town hall – it was opened in 1893 as the headquarters of the St Mary Battersea vestry, the forerunner of the Metropolitan Borough of Battersea.  However, as well as containing council chambers, committee rooms and office space, the building was also designed to be a public venue, with a Grand Hall built at the back of the complex.  This space quickly became home to a huge variety of events, from political rallies to poetry readings, boxing matches to ballroom dancing.  An organ (pictured below) was installed in 1901 – it was designed by Robert Hope-Jones, who went on to create the iconic Wurlitzer organ.

In the early twentieth century, the Borough of Battersea was well-known for its radical politics, and leading figures such as Charlotte Despard and Emmeline Pankhurst spoke at the town hall, as well as influential local figures such as John Burns, Battersea’s first representative on the London County Council, and John Archer, Battersea’s first black mayor.  Bertrand Russell delivered his famous talk “Why I am not a Christian” at the town hall in 1927.

In 1965, as part of wider reforms of the government of London, the Borough of Battersea ceased to exist, becoming instead a part of the Borough of Wandsworth.  This meant that the town hall became surplus to requirements, and for a number of years this beautiful building was threatened with demolition.  But local residents loved their old town hall, and a sustained campaign began to ensure its survival.  It was awarded Grade II* listing in 1970, not only due to it being an important example of Victorian civic architecture, but also due to its longstanding role as an arts and entertainment centre for the local area.  After the closure of the town hall, the site continued to operate as a council-run arts centre, but its future was not secure until it reopened as Battersea Arts Centre, an independent arts venue in the late 1970s.

As well as being home to many theatre productions – hosting, among other groups, the innovative Punchdrunk theatre company – Battersea Arts Centre has hosted all sorts of events including an annual beer festival and tea dances.   It’s also home to a bar, and to a play centre for children under 5.  The Grand Hall, pictured below, has been at the heart of many of the arts centre’s events.

Interior of the Grand Hall, showing the distinctive curved ceiling. Image taken in 2014 and shared by user EdwardX under a Creative Commons license (image via Wikimedia Commons)

In 2013 renovation work began at Battersea Arts Centre, with grand plans to make the building an even more attractive space for innovating arts projects.  Scaffolding went up around the building, and work began in earnest.

However, on 13th March 2015, a fire broke out, and the flames quickly spread through the dry, wooden roof space of the Grand Hall.  The fire brigade was called, the arts centre was evacuated and very soon pictures began appearing on Twitter showing the Grand Hall’s roof in flames.  The fire brigade were unable to save the roof of the Grand Hall, which soon collapsed, but their hard work meant that the fire was soon brought under control before it spread to other parts of the arts centre, or to other nearby buildings.  Fortunately, no-one was hurt – the fire broke out in the afternoon, when the centre was quite quiet.  The situation could have been altogether grimmer if the fire had broken out during an evening performance in the Grand Hall. 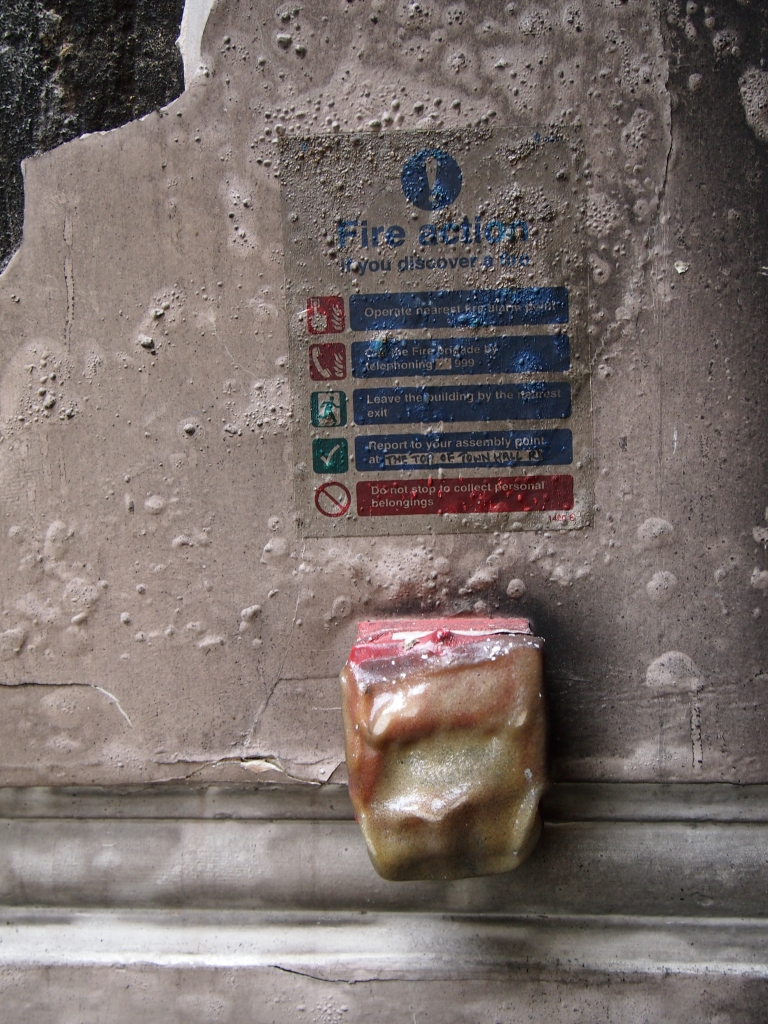 I remember going past Battersea on the train the day after the fire and being horrified at the devastation – the two gable ends standing precariously, with an empty, smouldering space between them.  Tweets, pictures and videos about the fire were filled with a genuine sadness at the building’s fate – one got a real sense that the arts centre was loved by many people.

I visited the ruined Grand Hall on 10th October 2015, after the Arts Centre invited members of the public to visit the burnt-out shell, learn about the plans for its rebuilding and provide any feedback or suggestions about how the Grand Hall of the future will look and operate.  After donning hard hats and high visibility jackets, a member of staff took us up to the Grand Hall, which since the fire has been been made safe, and much of the debris removed.  It was a very sad sight.  A couple in my tour group had been married in the Grand Hall, and were particularly upset to see it in ruins.

The distinctive plasterwork on the Grand Hall’s ceiling was completely lost – after the fire had been put out, it was hoped that some of it might have survived to help with the restoration of the building, but sadly not a trace of it was found.  Some of the plasterwork on the arch over the stage, however, has survived and can still be seen.

Twisted remains of everyday objects such as chairs and music equipment could be seen, giving a frightening insight into the ferocity of the fire.

Miraculously, the fragile and ornate glass dome – situated between the Grand Hall and the old town hall buildings – was saved.  The survival of this unique structure was announced the day after the fire; a real consolation after so much was lost.

Looking up at the beautiful glass dome. Image taken in 2014, shared by user EdwardX under a Creative Commons licence (via Wikimedia Commons)

Another unlikely survivor was the Hope-Jones organ, most of which had been off site being restored at the time of the fire.  Although the wooden casings of the organ were completely lost in the fire, enough of the organ remains for it to be restored and when the Grand Hall is rebuilt, it will once again take pride of place in there.

As part of our visit to the Grand Hall, architects from the firm overseeing the building’s restoration were present with their plans for the new Grand Hall.  Drawings and models illustrated the ideas for the rebuild – something more modern and energy-efficient than its Victorian predecessor, but a building that would nonetheless remain faithful to the design of the original Grand Hall.

Battersea Arts Centre is planning to open an off-site theatre space while the Grand Hall is being rebuilt, and there are also plans to open an arts centre at Battersea Power Station after its redevelopment.  The rebuilding of the Grand Hall is expected to take about three years – it will be wonderful to see this beautiful Victorian gem restored to its former glory and to its rightful place at the heart of cultural life in Battersea.  In the meantime, the sections of the centre not affected by the fire remain open to the public, with a full programme of events.

You can find out about events at Battersea Arts Centre by visiting their website.