Of the many bridges that span the River Thames in London, Hammersmith Bridge must certainly rank as one of the most picturesque.  Each year it is seen by spectators of the famous University Boat Race, which passes beneath it, and its striking design makes it a favourite with photographers.  The bridge has, however, had rather a dramatic history, ranging from alarming incidents of overcrowding to IRA bombs and daring rescues. 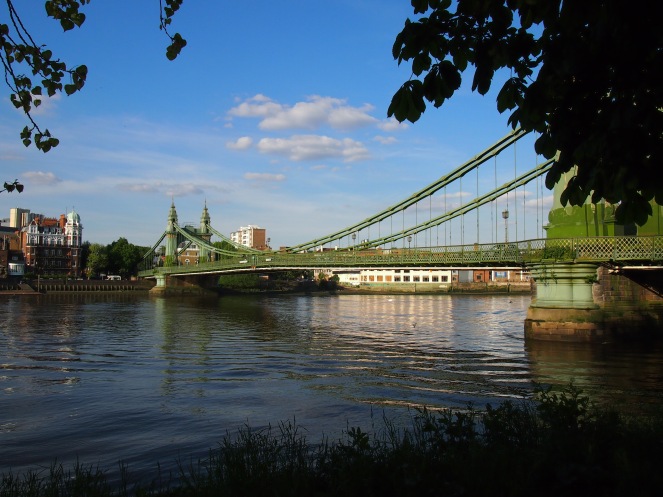 The current bridge is not the first Hammersmith Bridge.  By the early 19th Century, London had been growing rapidly for many decades and in order to cope with increasing volumes of traffic and trade a number of new bridges had already been constructed across the river, including Blackfriars Bridge (opened 1769) and Battersea Bridge (1772).

At the dawn of the 19th Century, Hammersmith was already a well-established little town on the banks of the Thames.  Its pretty riverside location attracted artists, and the wealthy who sought a quiet retreat close to London.  Caroline of Brunswick, the wife of George IV, made her home at Hammersmith until her death in 1821.  The riverside location also made Hammersmith an ideal base for industry and commerce, and the space which is today Furnival Gardens was packed with houses, factories, wharves and warehouses.

This first bridge at Hammersmith was designed by William Tierney Clark, a Hammersmith resident who was among the first engineers to design suspension bridges, and who is today best known as the designer of the Széchenyi Chain Bridge that spans the Danube in Budapest.  Hammersmith Bridge was the first suspension bridge to cross the Thames; as a result, its design and construction attracted considerable attention.

Before the bridge was even completed, concerns were being raised about its strength.  The Morning Post reported on 29 September 1827 that “the timbers forming the road-way are weak considering the weight they may have to sustain, and the opinion of persons well-acquainted with the work is, that after two or three years, it will require constant repairs.”

The new bridge was opened to traffic in 1827 (as it was privately owned, it was a toll bridge) and this new river crossing helped to hasten the development of north Barnes as a residential area.  However, fears about the bridge’s strength and stability were to be realised, with matters coming to a head in 1870 during the famous University Boat Race.  The race, an annual event between teams from Oxford and Cambridge Universities, had been taking place on the stretch of the Thames between Putney and Chiswick since 1845, and attracted large crowds.  Many spectators coming to watch the race would congregate on Hammersmith Bridge, but the bridge was not really strong enough to cope with such a large number of people standing on it at one time.  In 1870, it’s estimated that about 10-12,000 people gathered on the bridge to watch the boat race.  Newspaper reports from the time emphasise the “shameful overcrowding” on the bridge (London Evening Standard, 14th April 1870), but most alarming was the manner in which the bridge swayed under the weight of so many people.

With traffic over the bridge increasing as London continued to grow, the only real option was to replace the bridge with a stronger, safer structure.

Sir Joseph Bazalgette, the great engineer most famous for designing London’s sewer system, was chosen by the Metropolitan Board of Works to be the designer of the replacement for Tierney Smith’s bridge.  The pier foundations from the old bridge were retained, and the new bridge was built onto them.  Work began on the new bridge in 1884 and was completed in 1887, with the Prince of Wales officially opening the bridge on 11th June of that year.

Sir, May I inquire, through your journal, how much longer the public is expected to tolerate the miserable and disgraceful condition of the Bridge erected over the Thames at Hammersmith for use during the closing of the old Suspension Bridge.

The temporary structure, although doing important work, and intended to serve for a considerable interval – if it is to be in use until the reopening of the old Bridge – has been constructed without the slightest regard for surface drainage, and has hitherto been permitted to exist without any proper or effectual measures being employed to remedy so serious a defect.  Consequently during wet weather the Bridge is impassable to pedestrians, except under circumstances of the greatest discomfort and inconvenience, owing to the accumulation of water on the surface of the footway and roadway, with no means of it being carried off.

As the new Hammersmith Bridge neared completition, its design was much remarked upon.  The London Daily News described the new bridge as “more ornamental in its design” than the previous incarnation, and declared the new bridge to be “much handsomer” than its predecessor (3rd May 1887).  The Pall Mall Gazette, reporting on 18th June 1887, was impressed by the chain link suspension design – “remarkable for the size of the steel links employed”.

Some of the ornamentation on the new bridge reflected a growing sense of civic pride in London in the late 1880s.  At either end of the bridge, the royal coat of arms is surrounded by six other coats of arms associated with London and the surrounding area: the City of London, the county of Kent, Guildford (representing the county of Surrey), the City of Westminster, Colchester (representing the county of Essex) and the county of Middlesex.  These images were once painted in their original heraldic colours, but today they are painted to match the green and gold colours of the bridge.  Nikolaus Pevsner, the great architectural historian, was no fan of the decorations on the bridge: “Iron-framed towers clad in cast iron, partly gilt, with little Frenchy pavilion tops, and elephantine ornament at the approaches.” (Pevsner & Cherry – London 2: South, p715)

All of London’s bridges have tragic tales of those who jumped from them seeking to end their lives, or fell accidentally from the bridge into the murky depths of the Thames, and Hammersmith Bridge is no different in that respect.  One incident in particular, though, is marked by a little plaque on the side of the bridge.  Late one night in December 1919, a young woman fell into the river.  A young South African airman, Lieutenant Charles Campbell Wood, was passing and upon hearing the woman’s cries for help he dived into the river to rescue her.  He saved the woman’s life, but poor Charles sustained head injuries during the rescue that caused him to contract tetanus and die two weeks after the rescue.

At the end of the 19th Century, London found itself under attack from militant Irish Republicans, who wished to see Ireland become an independent state.  The Fenians planted many bombs in London between the late 1860s and the 1880s, including the first bomb on the London Underground in 1883.  In 1939, the IRA (Irish Republican Army) carried out a campaign of bombings, and the target for one of these attacks was Hammersmith Bridge.

Late one night on 29th March 1939, hairdresser Maurice Childs was walking across the bridge when he noticed a package that was hissing and sparking.  The quick-thinking Mr Childs – perhaps thinking of the other bomb attacks on London by the IRA that had taken place in recent weeks – threw the package into the water, where it exploded and sent a huge plume of water into the air.  A second explosion caused minor damage to the bridge, and shattered windows in nearby buildings, but the actions of Mr Childs were recognised as having prevented much more damage.  The London County Council awarded him 50 guineas, and he was also given an MBE for his bravery.

The IRA targeted Hammersmith Bridge on two more occasions.  In 1996, two huge Semtex bombs were planted on the bridge – they failed to detonate effectively, and the bridge had been cleared a short time earlier following a telephone warning of an imminent attack, so no-one was hurt.  After this incident, Hammersmith Bridge was closed for three years for extensive work, including the restoration of the original green and gold paint colour scheme.  Another IRA bomb exploded on the bridge in 2000, but failed to cause much damage, instead its impact was more keenly felt by those caught up in the traffic chaos caused by the bridge’s closure following the explosion.

Hammersmith Bridge was never designed for the volumes of traffic that it has had to carry during the 20th and early 21st Centuries, and as a result it has had many short closures over the years to repair and strengthen the structure.  Double decker buses are no longer permitted to cross the bridge, and there are also weight and width restrictions in place – memorably, former Top Gear presenter Jeremy Clarkson caused chaos in 2005 when the Ford GT he was driving got stuck on the bridge approach. 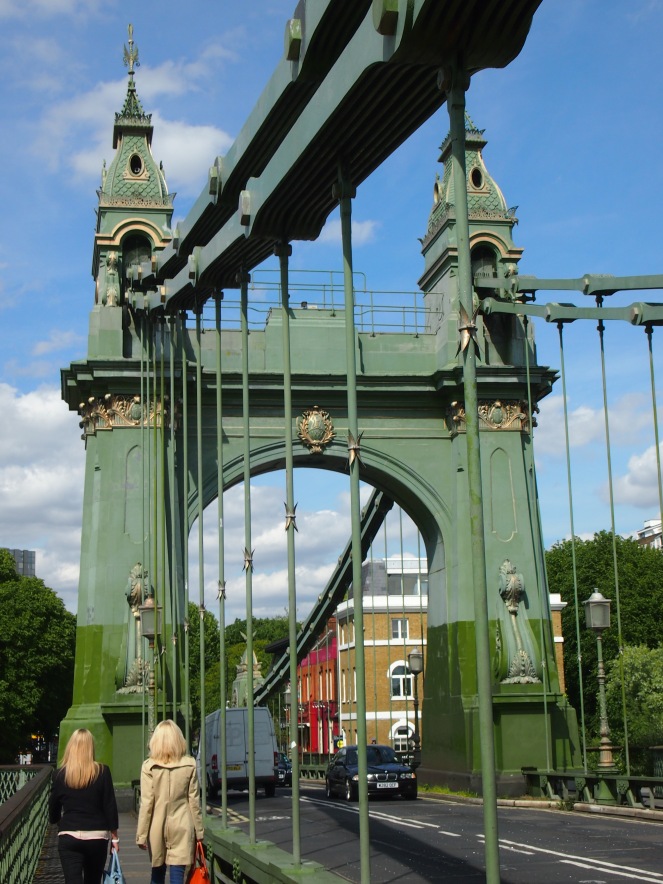 Despite the problems it has faced in the modern age, Hammersmith Bridge remains an attractive and well-loved river crossing, and its Grade II* listing ensures that it will grace the Thames for many years to come.

Attack was third on bridge that has become strategic target – The Guardian, 2nd June 2000 http://www.theguardian.com/uk/2000/jun/02/northernireland.paulkelso