END_OF_DOCUMENT_TOKEN_TO_BE_REPLACED

Many people walking past the wall of St Bartholomew’s Hospital on West Smithfield, close to the memorial to William Wallace, stop to look at a series of craters and marks on the wall that look as though they were caused by an explosion of some sort.  These scars are from a devastating V2 rocket attack on the area during the Second World War, but this wasn’t the first aerial attack to bring death and destruction to this part of London.  Bartholomew Close, not far from the scarred walls, was hit during one of the very first air raids on London, a terrifying Zeppelin raid in 1915.

END_OF_DOCUMENT_TOKEN_TO_BE_REPLACED

London is home to a number of ruined churches – in the City of London alone there are several, victims of the bombing raids of the Luftwaffe in the Second World War.  However, not all of the ruined churches of Greater London are victims of the Blitz.  In Stanmore, a comfortable suburb at the top of the Jubilee Line, another ruined church can be found alongside its Victorian successor.  The current parish church of St John the Evangelist was built in the mid-19th Century, but the picturesque ruins of the 17th Century church it replaced still survive in the church’s large burial ground.

The burial ground is a tranquil place, despite being close to a busy main road. Numerous squirrels darted in and out of the gravestones and a pair of magpies strutted around, while pigeons cooed softly, hidden from sight.  It was a humid September day when I visited, with shafts of sunlight shining through the clouds.  For an hour or so I had the place to myself, before the ruin was opened for the afternoon. 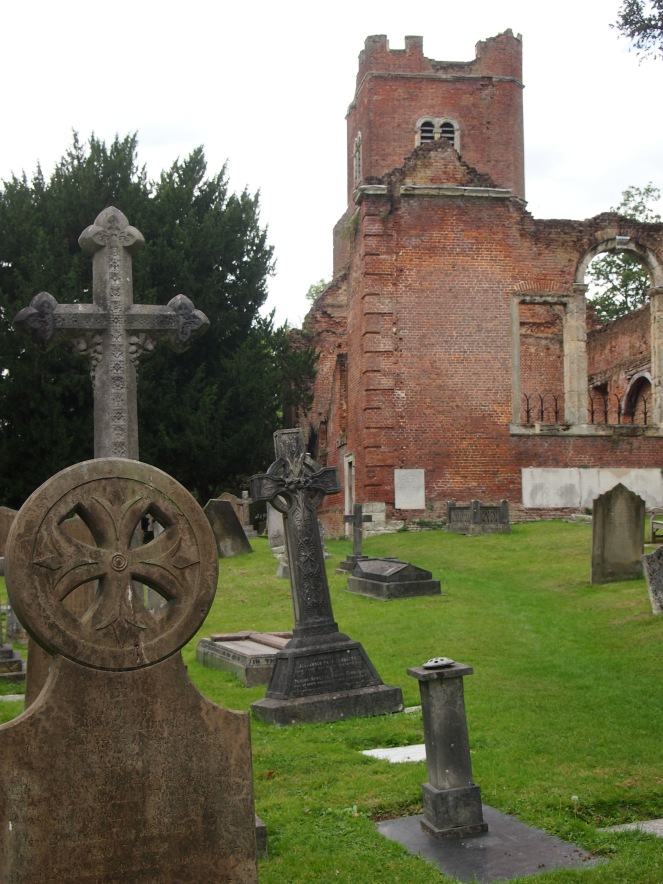 END_OF_DOCUMENT_TOKEN_TO_BE_REPLACED

Brompton Cemetery is particularly rich in grand memorials.  In the centre of the cemetery, amongst the dark Victorian crosses and angels, stands a paler, more modern memorial.  The face of a young man stares out from an impressive, well cared for headstone.  Beneath the inscription is a dramatic image of a Zeppelin – one of the monstrous German airships of the First World War – falling to the ground in flames while a comparatively tiny aircraft flies to safety.  The headstone, which occupies a prominent spot in the cemetery, commemorates the bravery of one of the British Armed Forces’ first heroes of aviation – Flight Sub-Lieutenant Reginald Alexander John Warneford. END_OF_DOCUMENT_TOKEN_TO_BE_REPLACED