John Ruskin once described Lincoln Cathedral as being “out and out the most precious piece of architecture in the British Isles.”  Sitting at the summit of the hill that Lincoln is built on, the cathedral occupies a commanding position over the surrounding area.  It’s easy to see why Ruskin held this wonderful building in such high esteem.

As the picture above shows, the dominant architectural style of the cathedral is Gothic – the vast screen of pointed arches on the west front, dating from the 13th Century, is a stunning example of the Early English Gothic style.  However, the deeply recessed windows and doorways at the base of the west front have an earlier origin.

The first incarnation of Lincoln Cathedral was consecrated in 1092, one of the early cathedrals built by William the Conqueror’s regime as a means of dominating the physical and spiritual environment of England.

This earlier, Romanesque cathedral was severely damaged in an earthquake in April 1185.  Thought to be one of the strongest earthquakes ever felt in the British Isles (possibly with a magnitude of over 5), the quake is said to have caused the old cathedral to “split from top to bottom.”  Most of the building was destroyed, leaving only parts of the west front still standing, including sections of the towers and the Romanesque arched doorways that visitors enter the cathedral through today.

The beautiful “Gallery of Kings” above the largest door is a later addition, dating from the time of the construction of the Gothic parts of the cathedral.  It cuts rather incongruously through the top of the ornate Norman arch that frames the huge doorway.  The richly carved kings sit under ornate Gothic canopies, drawing attention away from the earlier carvings around the door.

It’s only by chance that the Romanesque features from the pre-earthquake cathedral still survive today – it’s likely that they were retained to save money.  And what a fine thing that has proved for visitors to Lincoln today, as this decision has meant that the stunning and intricate Romanesque designs carved into the Norman doorway still survive today.  It’s unlikely that the carvings we see today are the Norman originals, which would have deteriorated over time.  The worn nature of the bricks on the left hand side of the image below, compared with the crispness of the Romanesque carvings, lends support to this.  James Essex oversaw extensive restorations of the cathedral in the 1760s, while further restorations were carried out by John Chessel Buckler a century later.  Clearly whoever was charged with restoring the stone surrounds of the doorway appreciated the beauty and striking design of the Romanesque carvings and commissioned them to be replaced with replicas.  This type of ‘restoration’ – the replacement of worn old parts of churches with brand-new replicas – was controversial in the 19th Century, and was in part a catalyst for the foundation of groups such as the Society for the Protection of Ancient Buildings, but that’s a story for another article. 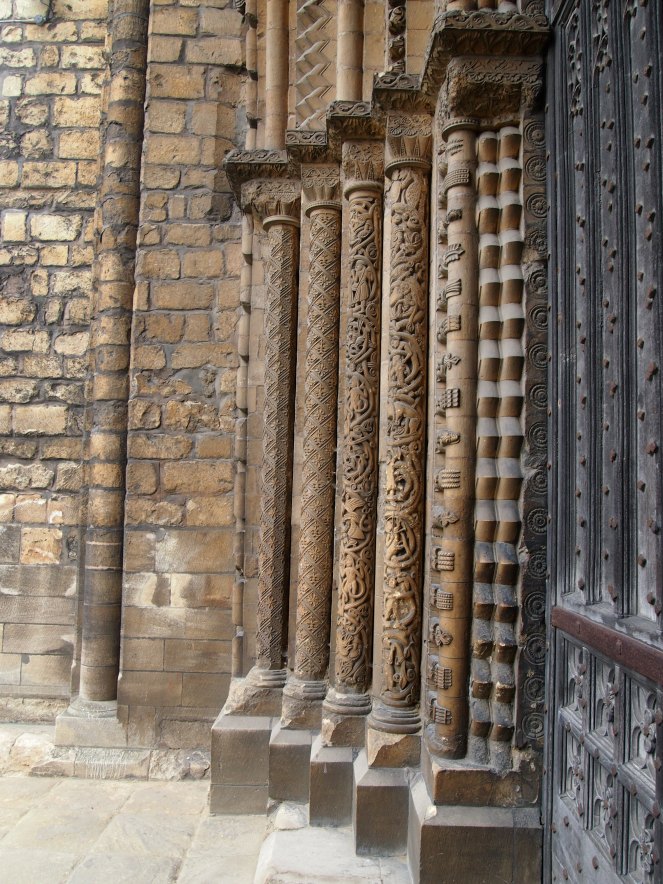 Romanesque doorways are distinctive and immediately recognisable.  Many of them survive all over Britain – the Normans built huge numbers of stone churches after the invasion of 1066, a way of stamping their authority on local populations in a dramatic and extremely visual manner.  The doorways are deeply recessed, with characteristic round arches that are decorated with geometric shapes and, sometimes, strange figures and beasts.

Let’s look at the carvings in more detail.

The doorway at Lincoln is particularly grand, with many arches sitting one inside the other, each one decorated in a different way – the columns at the far left and right as seen in the picture above consist of geometric shapes, and the columns in the middle feature intricately carved figures and beasts.  The limbs and stems twist over and under each other, like the knotwork on a stunning illuminated manuscript.  It’s also a style seen on the 11th Century tympanum stone at Southwell Minster, which we visited in an earlier post.

As well as birds and beasts, some of the arches are decorated with geometric patterns and natural forms such as flowers and leaves.  Despite the comparative simplicity of these designs, the carvings are still of an extremely high standard – the people employed to work on these doorways would undoubtedly have been among the most skilled members of their trade.

My favourite of all the carvings around the Romanesque doorways have to be the enigmatic beakheads – strange and sometimes frightening figures that seem to cling to the stone with beaks, claws or tongues.

Ron Baxter, an expert on Romanesque architecture, describes the beakheads as “one of the most bizarre and intriguing forms of sculpture.”  Beakheads are sometimes interpreted as being monstrous, sinful creatures that the churchgoer must reject upon entering the house of God. 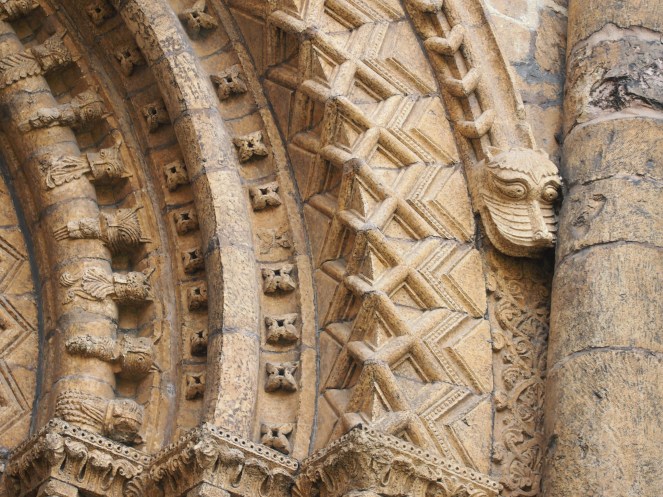 The chevron, or zig-zag, ornamentation is probably the most widespread and recognisable example of Romanesque decorative carving.

Perhaps the most precious of all the Norman-era carvings at Lincoln are the horizontal friezes. Dating from approximately 1123-1148 (and definitely not restored or replaced in the 18th or 19th Centuries), these friezes are less abstract in design than the carvings around the doorways – instead of patterns or strange beasts, they show the grisly fate that sinners could expect to meet after death.  This makes for quite an unsettling scene – as the Daily Telegraph comments, “who would expect fornication, avarice and sodomy to be depicted with quite such gusto on the face of one of the nation’s most magnificent religious buildings?”

However, this would not have been a particularly unusual sight in the medieval period.  At a time when many people were unable to read or write, powerful images would have had a huge impact on those who viewed them, and there are many surviving carvings, frescoes and manuscripts that depict the punishment of souls after death.  Frightening depictions of judgment and hell reminded the viewer to take care of their immortal soul by living a virtuous life.

By the end of the 1980s, the original carvings – made from less robust stone than the rest of the West Front – were deteriorating due to erosion and air pollution and the decision was made to remove and conserve them.  A replica of the north frieze was commissioned in the 1990s and unveiled in 2001, while the original carvings have since been displayed in the cathedral as they are too fragile to restore to their original location.  When I visited Lincoln, the south frieze was covered in scaffolding and undergoing conservation.

A closer look at the carvings shows the frightening situations they depict – wyverns biting the genitals of fornicators, devils torturing sinners and a huge mouth swallowing the damned while Christ, wearing a crown, looks on.

The Lincoln Imp might be the most famous of the carvings at Lincoln Cathedral, but the surviving Norman carvings on the West Front give us an amazing insight into the types of decoration used in Norman period – from the purely decorative chevrons, to the threatening carvings of tortured souls.  If you’re visiting Lincoln, be sure to have a good look at the front of the cathedral before going in, as the carved designs on the West Front are fascinating, beautiful survivors from Lincoln’s Romanesque cathedral.

Handbook to the Cathedrals of England, Richard John King, 1862, accessed via http://penelope.uchicago.edu/Thayer/E/Gazetteer/Places/Europe/Great_Britain/England/_Topics/churches/_Texts/KINCAT*/Lincoln/1.html

15 thoughts on “The precious Romanesque carvings at Lincoln Cathedral”