Next door to the well-known Kensal Green, one of London’s “Magnificent Seven” cemeteries, is another vast necropolis.  The two cemeteries are separated only by a tall brick wall, and although they are similar in age, and include many similar memorials, there are differences between the two cemeteries – some subtle, others less so.  St Mary’s Cemetery at Kensal Green is one of only two burial grounds in London that caters exclusively for Roman Catholics, and around the cemetery the visitor can see many symbols that reflect the faith of those buried there. 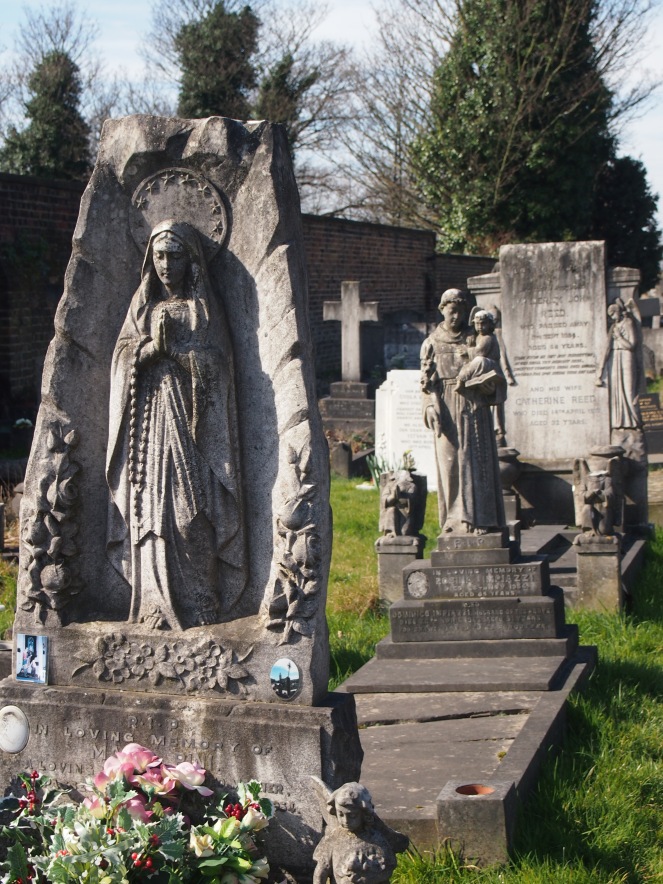 Opened in 1858, St Mary’s was opened adjacent to the larger Kensal Green Cemetery, after it had been ascertained that there was enough demand for it to be worth opening an exclusively Catholic burial ground.  Another Catholic burial ground, St Patrick’s, was opened in east London a decade later – London’s Catholic population grew rapidly during the mid-19th Century, largely due to immigration. 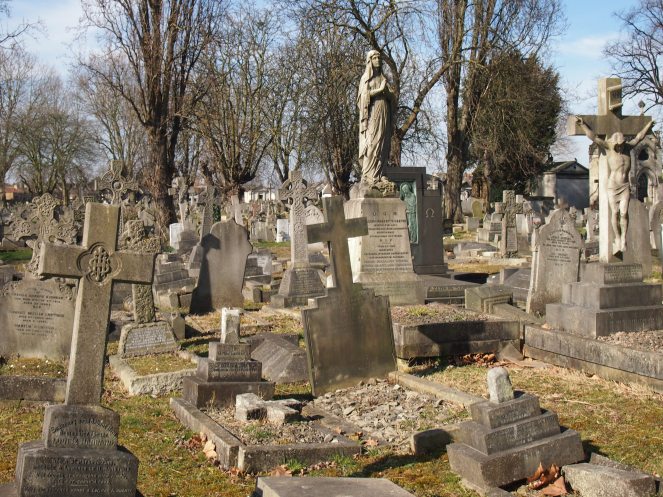 So who were all the Catholics who came to London in the 1800s?  There had always been a small community of Italians in London, with artists, bankers, merchants, musicians and Italian Protestants all known to have made their home in London during the early modern period.  But the Napoleonic Wars left northern Italy devastated, and this, coupled with the political upheavals in Italy in the 19th Century, led to thousands of Italians seeking a new life elsewhere.  Many settled in London, and the magnificent church of St Peter was opened at the heart of the Italian community in Clerkenwell in 1863.  The majority of London’s Italians were Catholic, and many of them were laid to rest at St Mary’s.  Italians have continued to settle in London ever since the Victorian period, and the inscriptions on many graves at St Mary’s are in Italian. 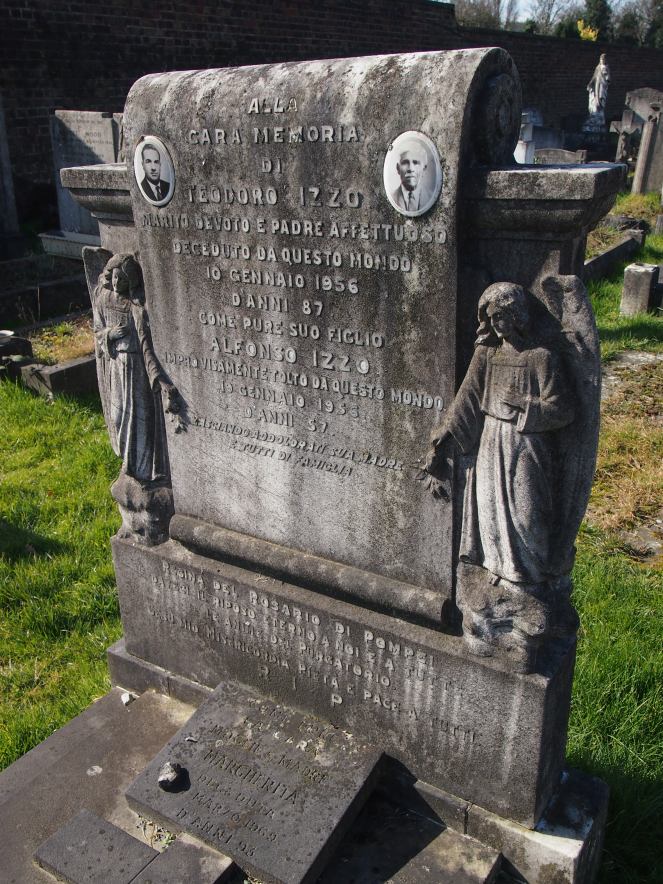 The faces of some of these Italian Londoners look out at visitors from little photographs on headstones. 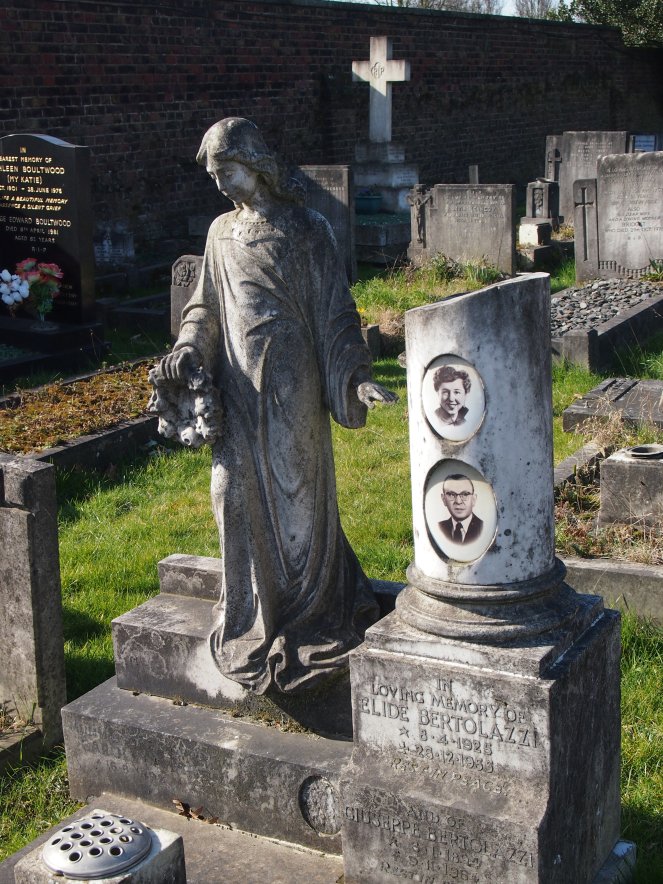 Another largely Catholic group that settled in London in large numbers during the 19th Century was the Irish.  It is estimated that by 1900 100,000 people from Ireland were living in London, with many more having Irish ancestry.  The Great Famine of the 1840s was the catalyst for many of those who left Ireland to begin a new life elsewhere, but Irish migration to London is not a thing of the past – thousands of people still leave Ireland for London each year. 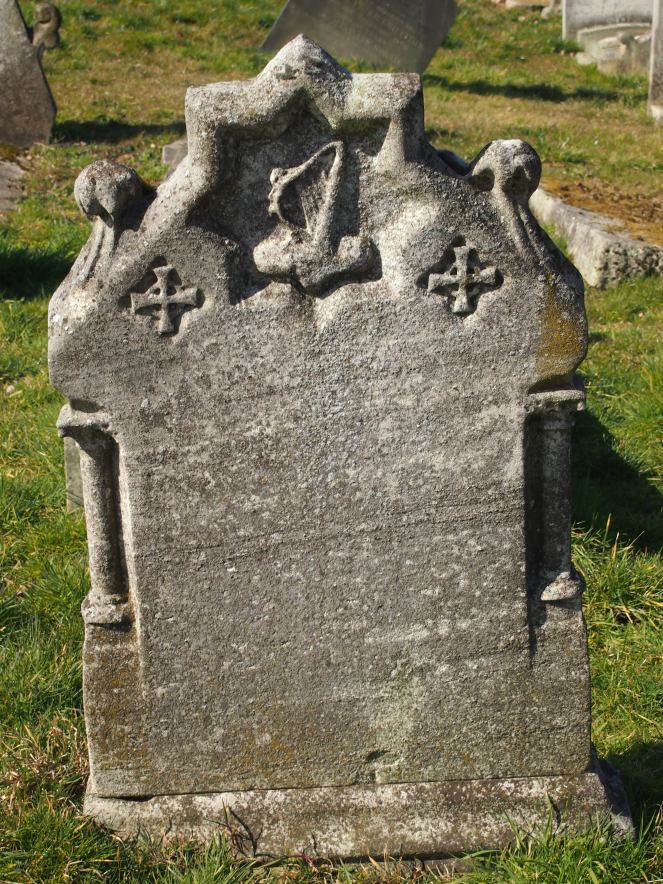 One figure not often seen depicted in burial grounds of other Christian dominations is that of Jesus Christ himself.  Occasionally a crucifix may be seen, but otherwise depictions of Christ are fairly unusual. However, at St Mary’s, many of the graves feature statues and other images of Christ.  Some are simple, others are grand and imposing.  Sometimes he is alone, and on other graves he is depicted welcoming people to eternal life. 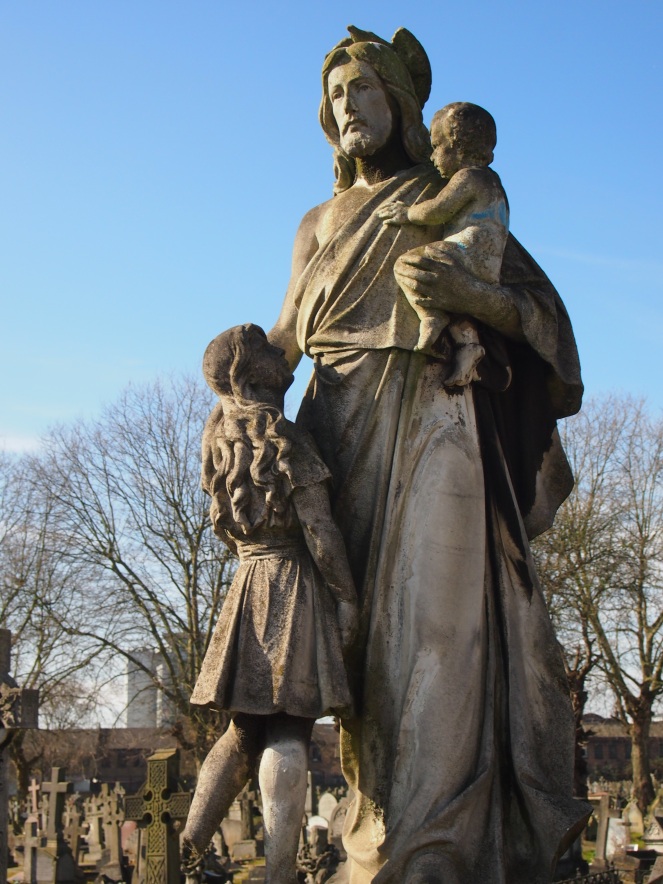 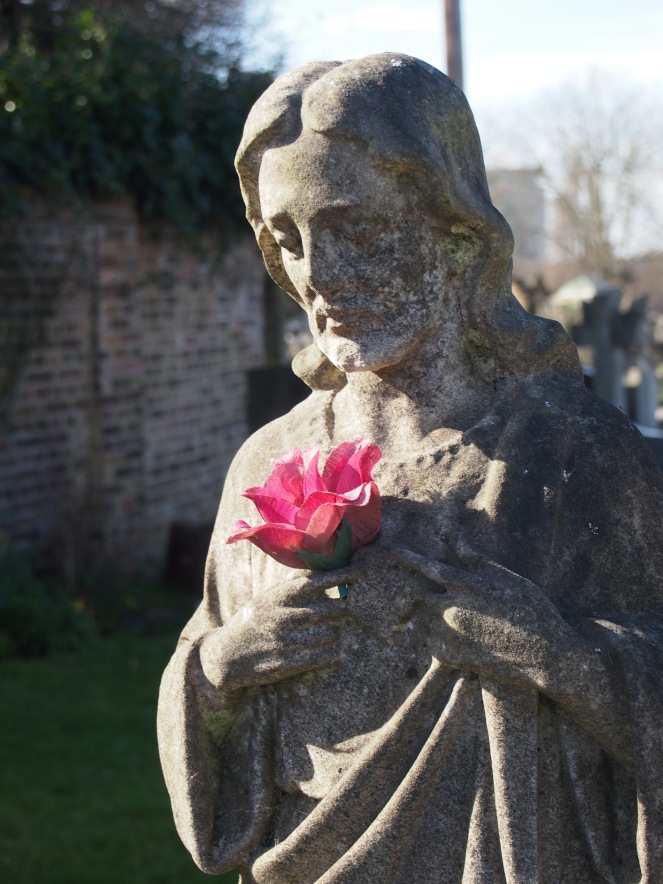 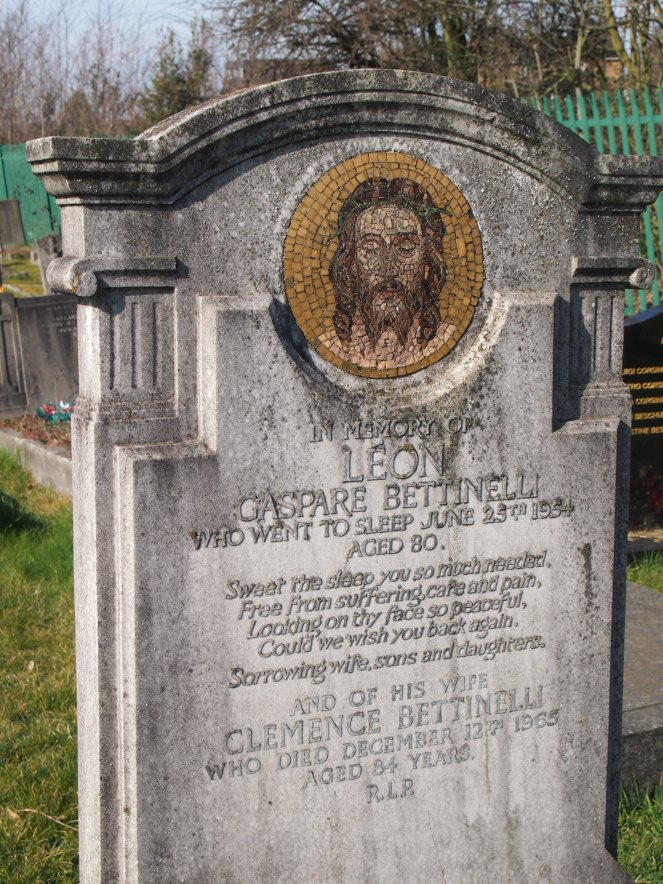 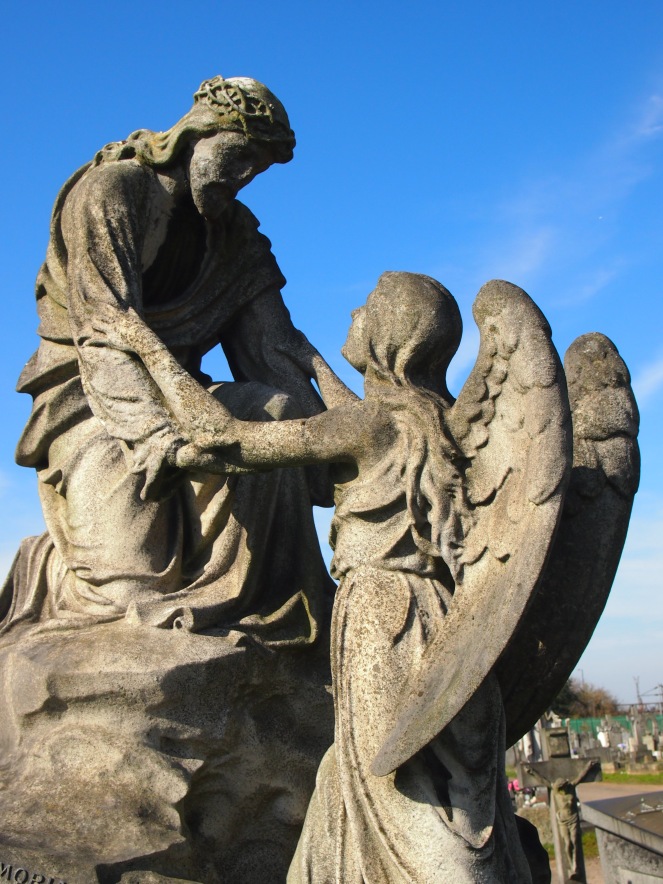 The Sacred Heart, where Christ is depicted with his heart showing, is a common symbol of devotion among many Catholics.  I grew up with such imagery – my grandparents had a Sacred Heart statue in their hallway – but it can present a rather odd, and potentially disturbing, image to those unfamiliar with Catholic traditions.  The meaning of behind the symbolism is less morbid than it appears.  The heart of the Sacred Heart simply represents the compassion of Christ and and his love for humanity.  With that in mind, it’s not surprising to find so many Sacred Heart statues in a Catholic cemetery like St Mary’s. 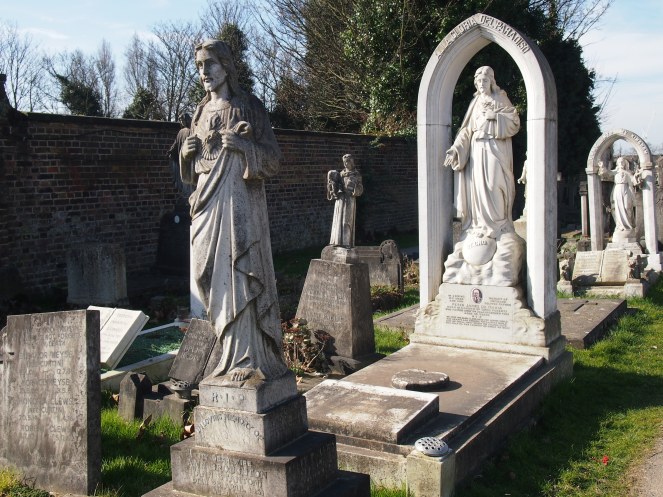 Many other graves feature the Virgin Mary, or other saints that were favoured by the people whose graves they mark.  I spotted Our Lady of Lourdes, St Peter, St Christopher, and some less well-known saints, such as St Trofimena, a saint whose veneration originates in Sicily. 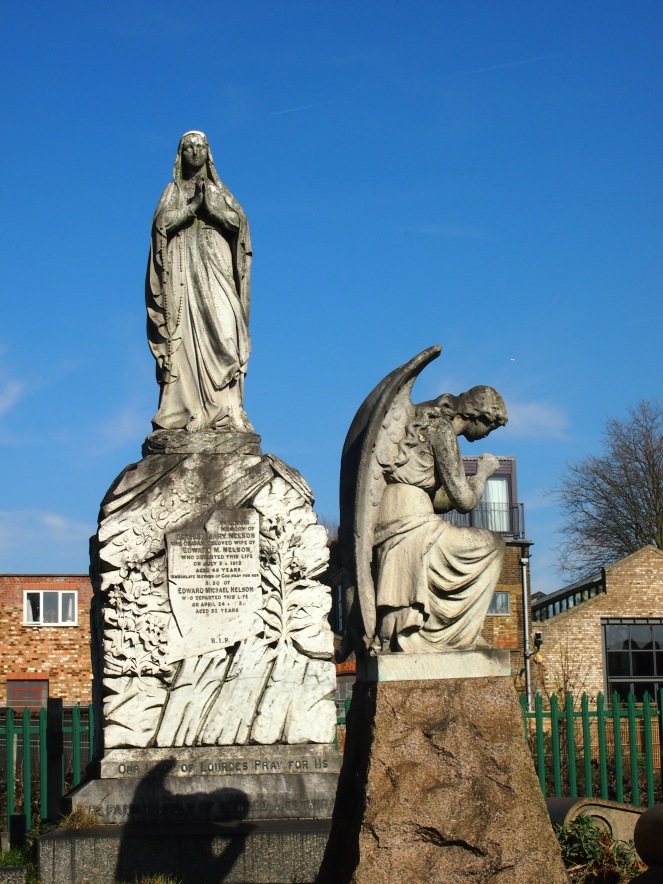 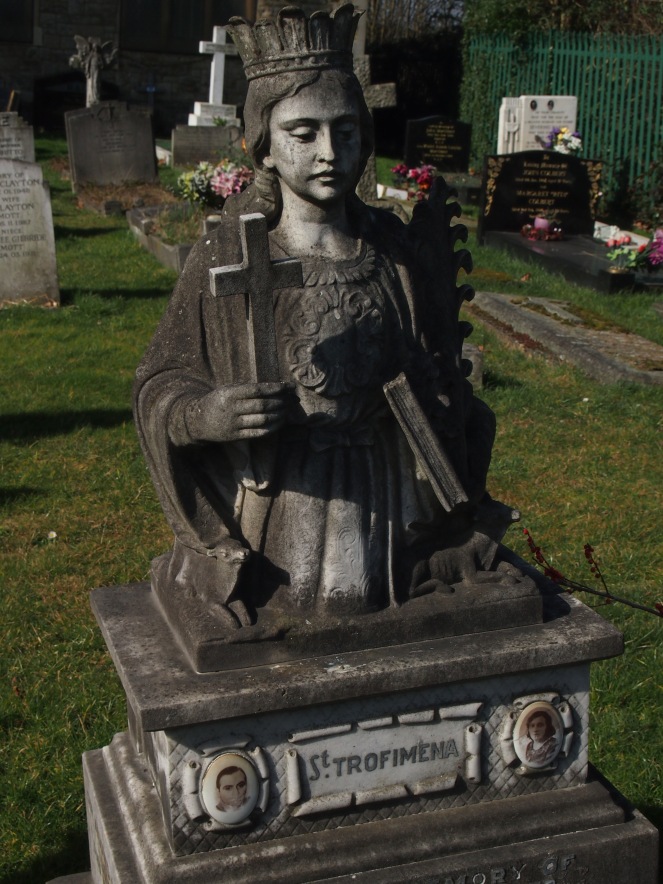 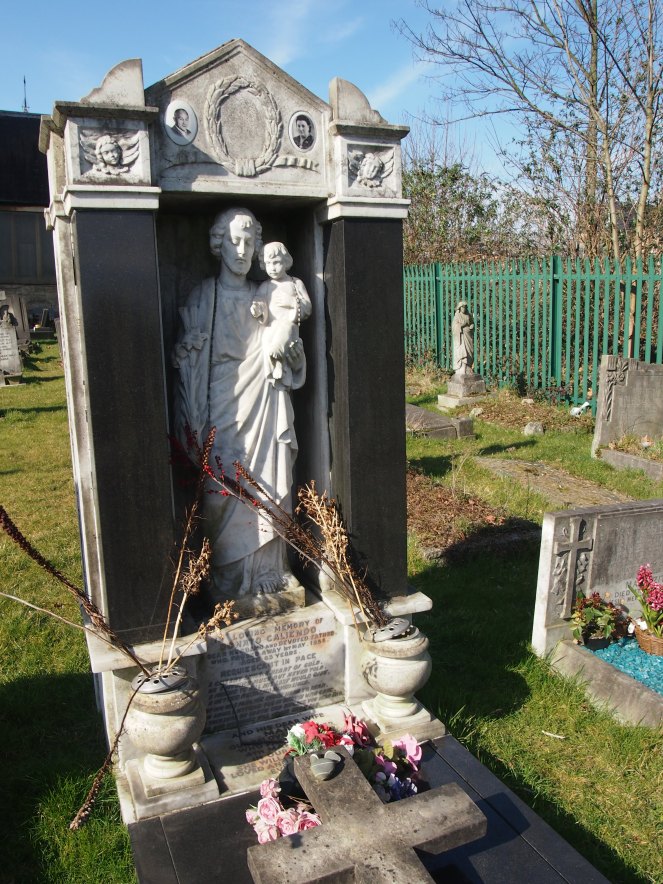 Although St Mary’s is overshadowed by its more famous neighbour, it too is home to many impressive statues, tombs and mausolea from the 19th and early 20th Centuries.  The most impressive memorials are clustered close to the cemetery’s little chapel, which was opened in 1860 and where mass is still celebrated today. 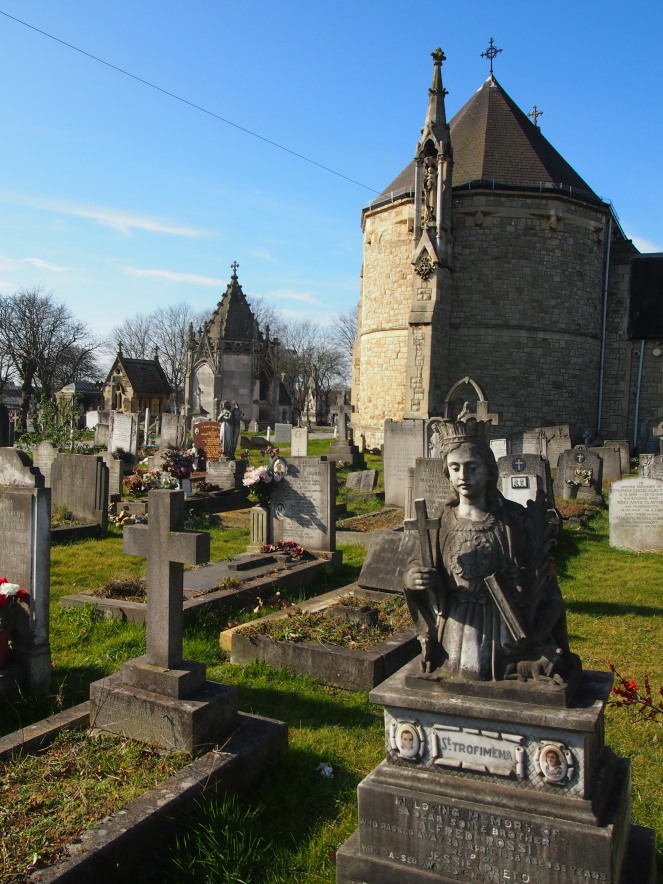 Many of these monuments feature the Gothic designs and stone angels that are commonly seen in Victorian burial grounds.  There are some lovely examples of graceful, high-quality sculpture – clearly graves that were carefully chosen and manufactured at some expense.  Despite the pollution of the city and the ravages of time, many of the monuments at St Mary’s 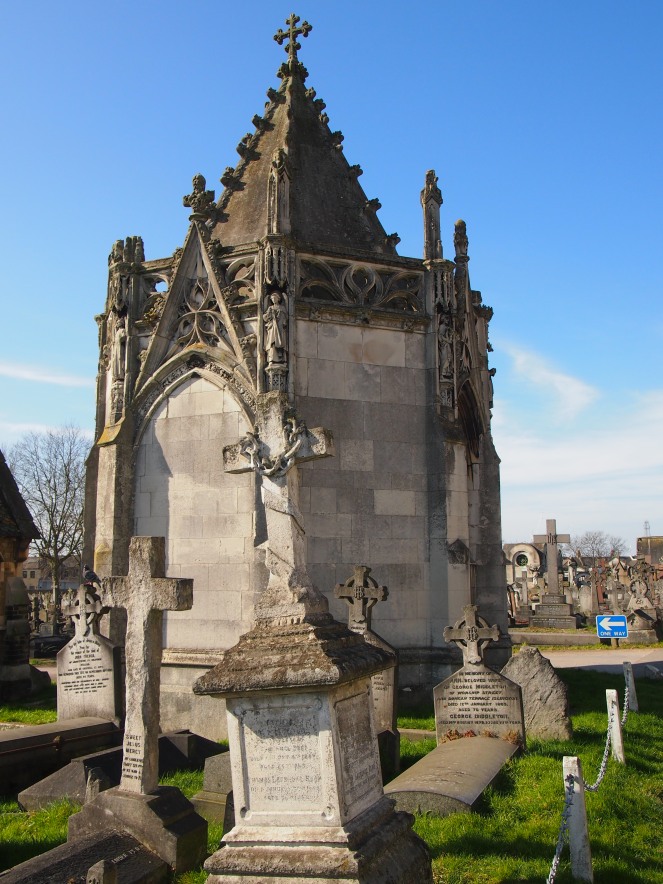 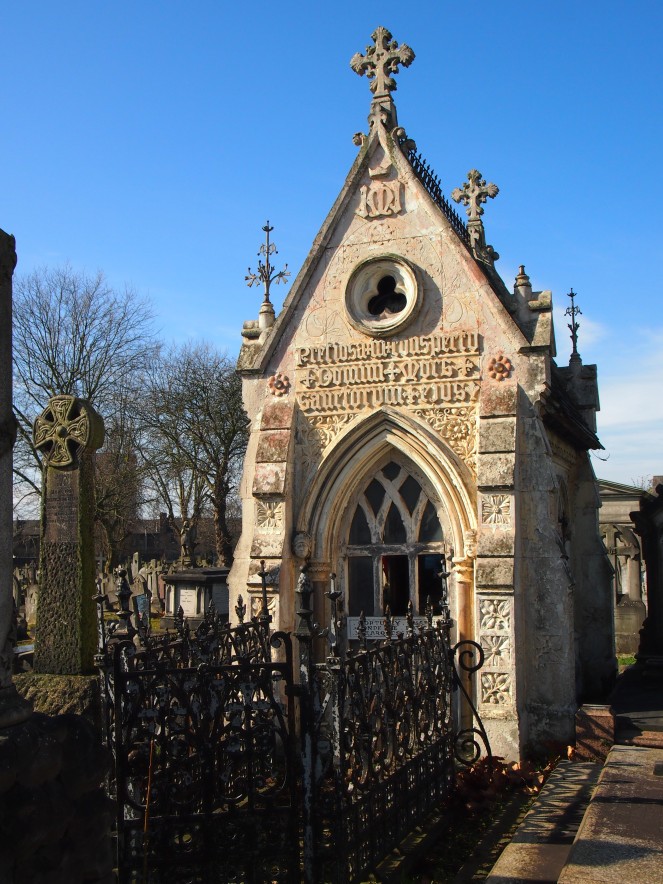 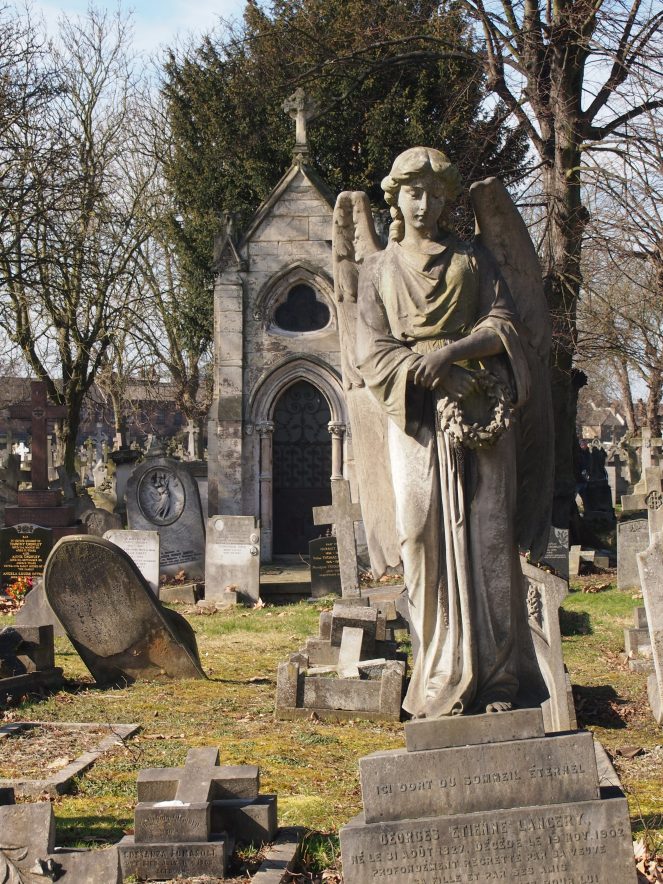 Classical-type memorials are less well-represented at St Mary’s – perhaps due to the cemetery being opened later in the 19th Century, when these styles were less in vogue.  By the 1860s, the Gothic Revival was the dominant architectural style in Victorian Britain and it’s fair to presume that this fashion extended to grand monuments built in cemeteries at this time. 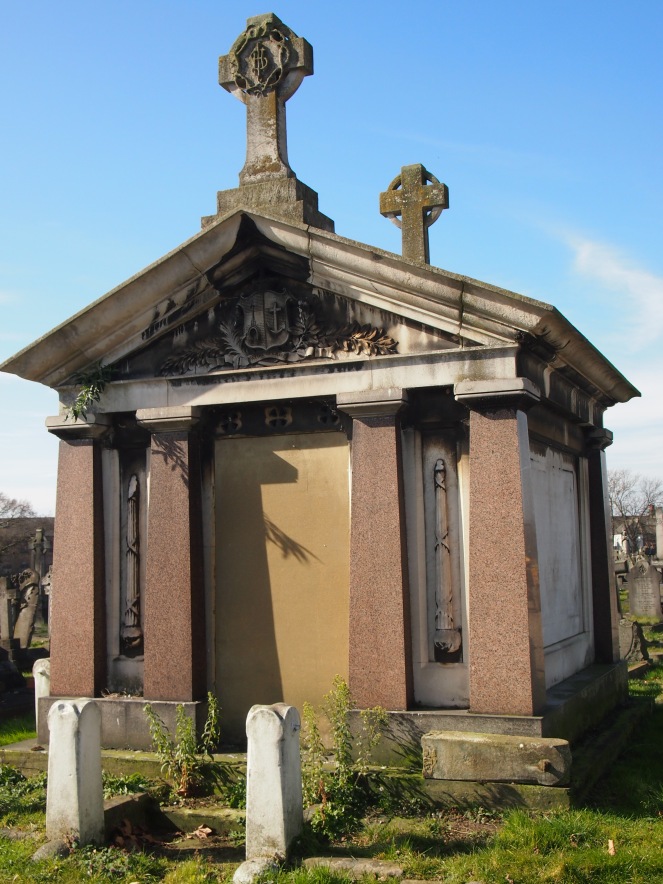 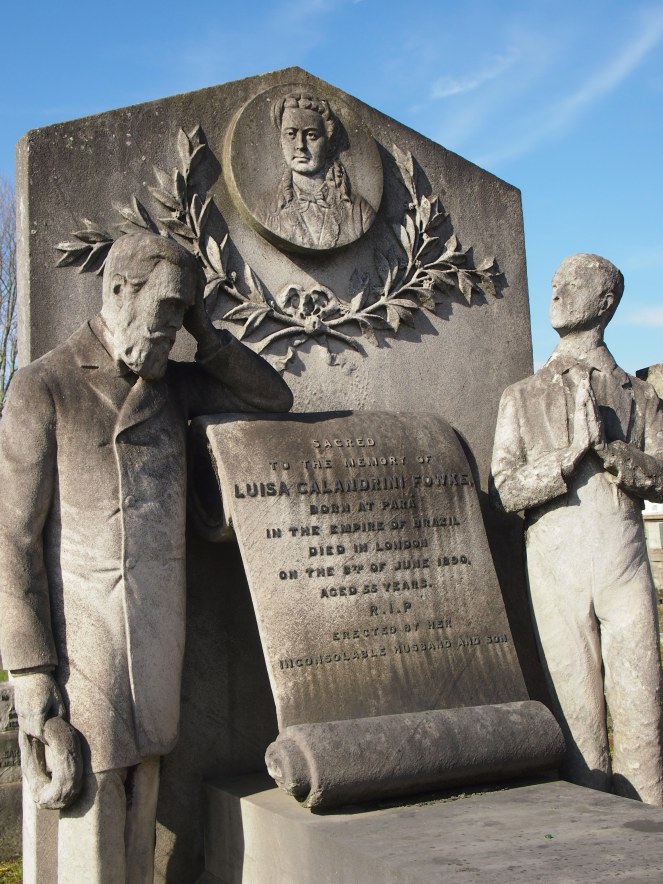 One of the most famous people buried at St Mary’s is the Jamaican-born nurse Mary Seacole, a contemporary of Florence Nightingale who also worked in hospitals for sick and wounded soldiers in the Crimean War. 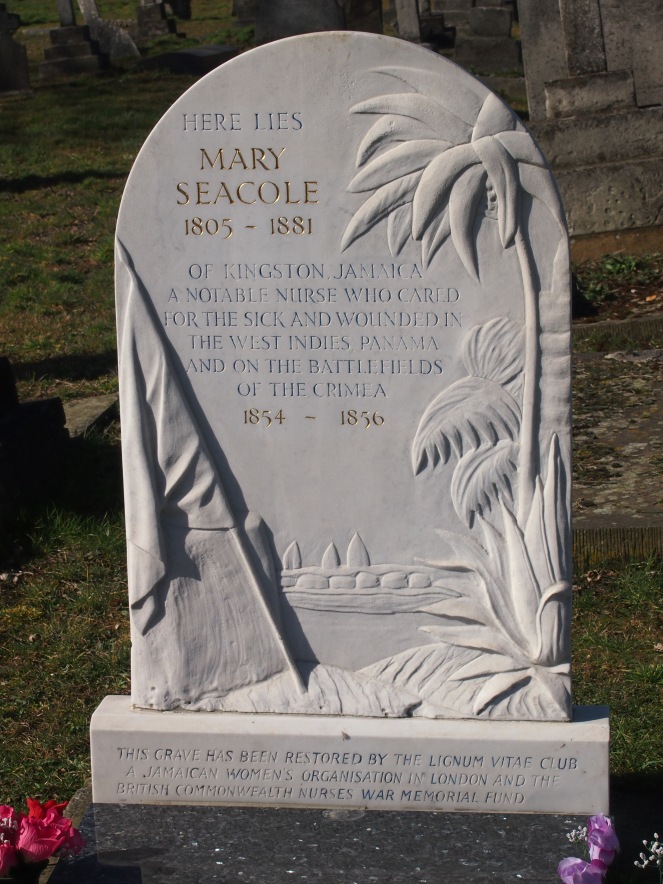 Mary Seacole is an important figure both as a part of the history of nursing and as one of the most prominent black Victorians.  Born in Jamaica, the daughter of a Scottish soldier and a free Jamaican woman, Mary learned a great deal from her mother, who was well-versed in traditional African and Caribbean remedies.  When disturbing reports began to reach Britain of the terrible conditions faced by wounded soldiers in the Crimea, Mary resolved to use her knowledge of medicine and nursing to help improve the situation.  Although she was refused permission to assist by the War Office, she nonetheless travelled to the Crimea independently and became popular with the men she helped to care for.  She published an autobiography in 1857, Wonderful Adventures of Mrs. Seacole in Many Lands.  She was well-known in her lifetime, but soon faded into obscurity after her death in 1881.  Her grave, which was for a time lost, was rediscovered and the impressive marble memorial that now covers it was unveiled in the 1970s. 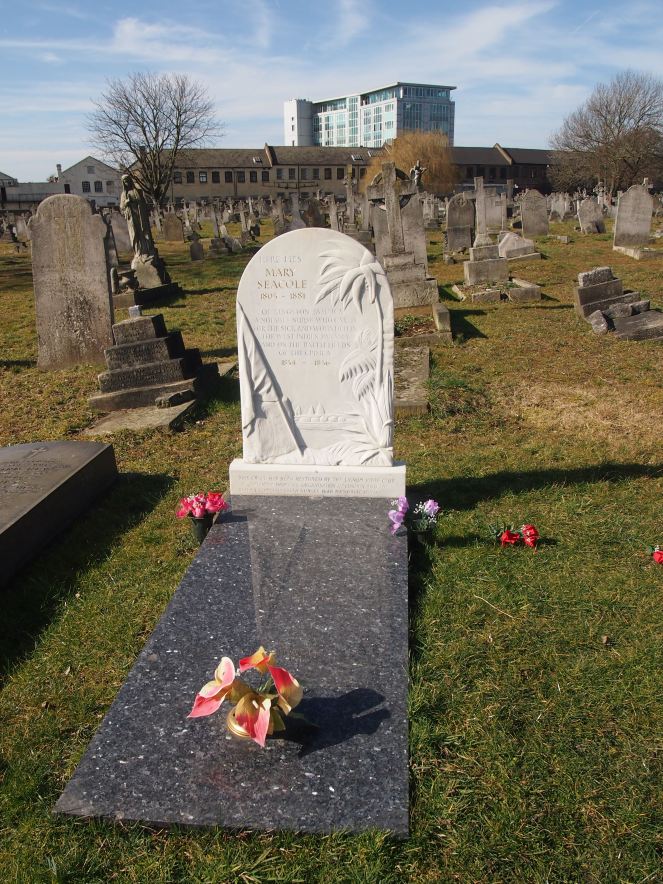 If truth be told, St Mary’s is a bit shabby, a bit forlorn.  Unlike its famous neighbour, people don’t gather there for guided tours around the grand tombs of the great and the good.  Some of its headstones have been vandalised, others have become worn through the passage of time and are quietly crumbling away.  The cemetery is in a conservation area, and many of its decaying tombs and monuments are classified as buildings at risk. 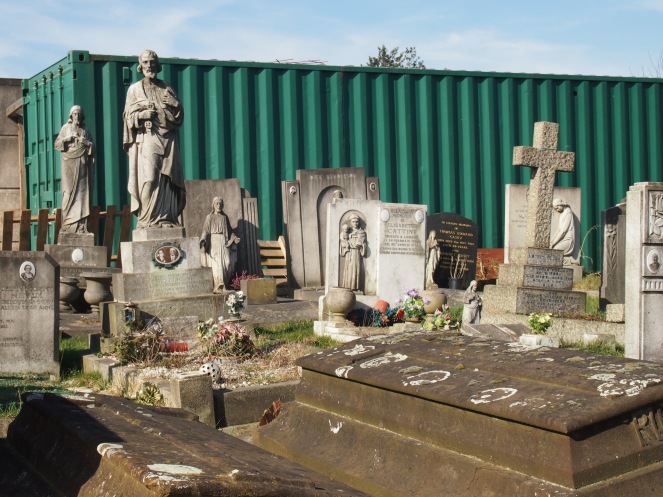 But in a sense, St Mary’s is busier and more in touch with the present day.  When I visited on a sunny Saturday morning, the other visitors were tending the graves of loved ones – unlike some of London’s other Victorian cemeteries, St Mary’s is not only a working cemetery but quite a busy one.  It feels less like a museum and more like a place existing in the present, rather than stranded in the past.  Land has been raised and reclaimed for new burials – I didn’t like to take pictures of this section of the burial ground, as many graves were being attended by family members and I wished to maintain their privacy, but the picture below gives some idea of how the ground is being raised to accomodate these newer burials.

An imposing Portland stone memorial commemorates Belgian soldiers who were killed in the First World War.  As Belgium was an ally of Britain, many wounded Belgian soldiers were brought to Britain to recover and many of those who succumbed to their injuries in London were laid to rest at St Mary’s.  Belgian civilians killed in London during the Blitz are buried close by. St Mary’s is also home to over 300 war graves from the First and Second World Wars, which are cared for by the Commonwealth War Graves Commission. 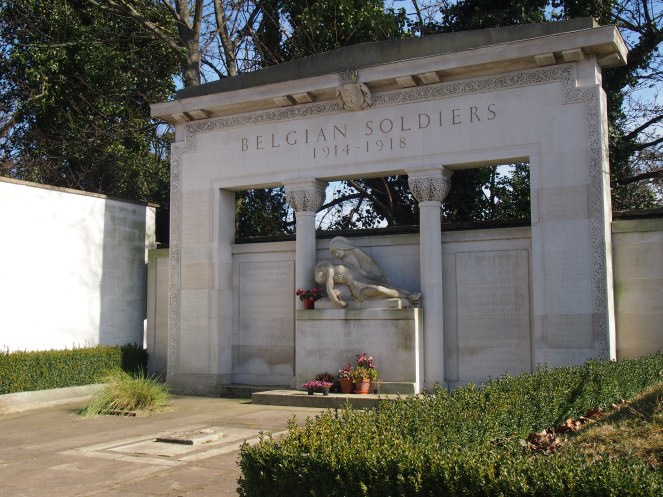 I came across the graves of nuns from the order of the Religious Sisters of Jesus and Mary.  Many priests are also buried at St Mary’s – the Secular Clergy Common Fund, a charity closely associated with St Mary’s, was set up in 1861 to provide financial assistance for eligible priests who were too elderly or infirm to be able to serve a parish. 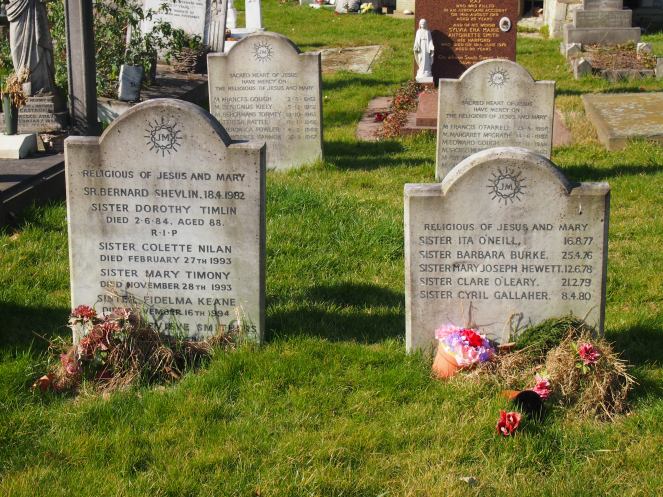 Over 165,000 people rest at St Mary’s.  Although some of its monuments are crumbling and damaged, it doesn’t have the depressing air of deliberate neglect that sometimes lies over urban cemeteries.  It’s a sad space, but I feel that’s mostly because, unlike some of the more museum-like Victorian cemeteries of London, it’s still full of living mourners.  I saw people refreshing the flowers on the graves of their loved ones, a ritual that they perhaps carried out every week.  Some were tending graves too fresh to even have a headstone.  I felt I was intruding on their grief, and deliberately stuck to the old parts of the cemetery, where the often impressive graves didn’t have anyone to tend them or mourn at them any more.  St Mary’s is a beautiful place, and would probably be more celebrated for its impressive monuments if it weren’t next door to the dramatic splendour of Kensal Green.  But for aficionados of Victorian graves and sculpture, it’s definitely worth a visit. 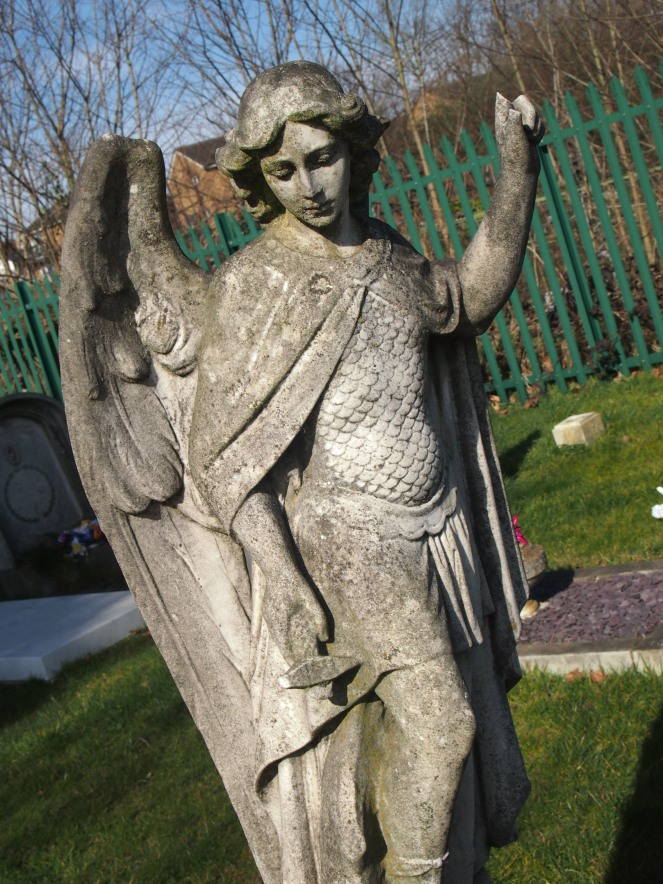 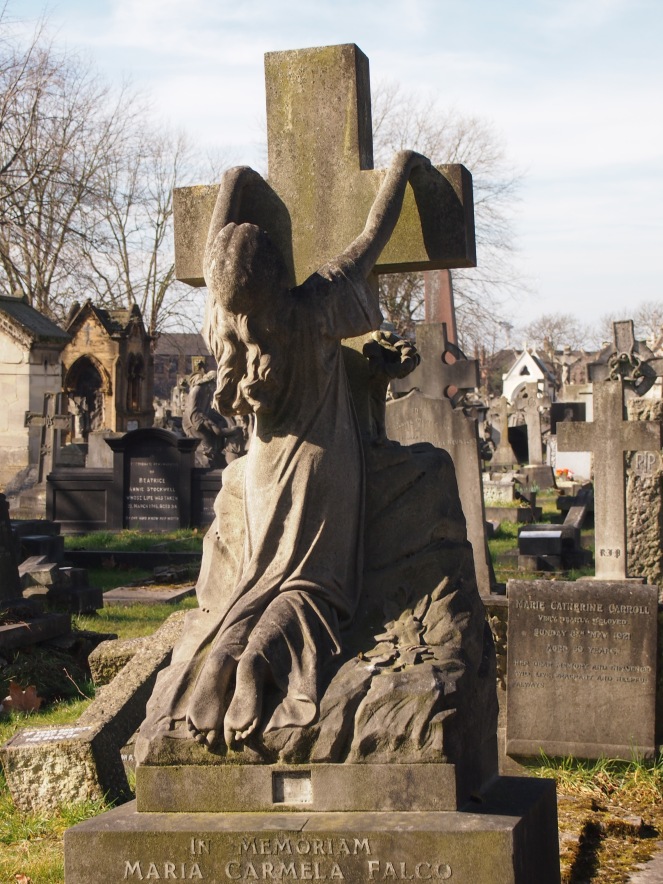 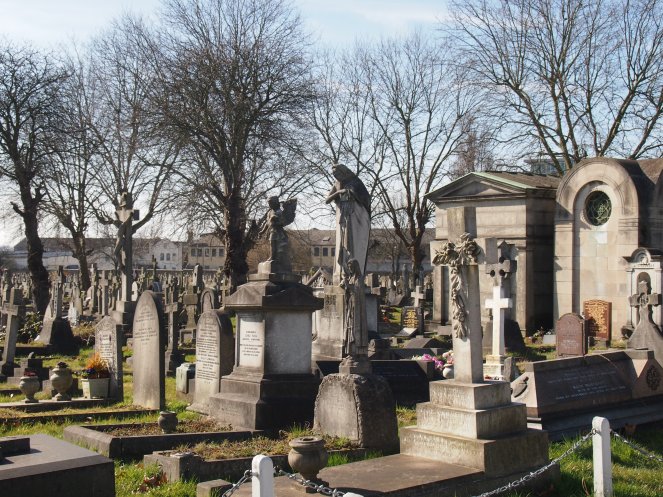 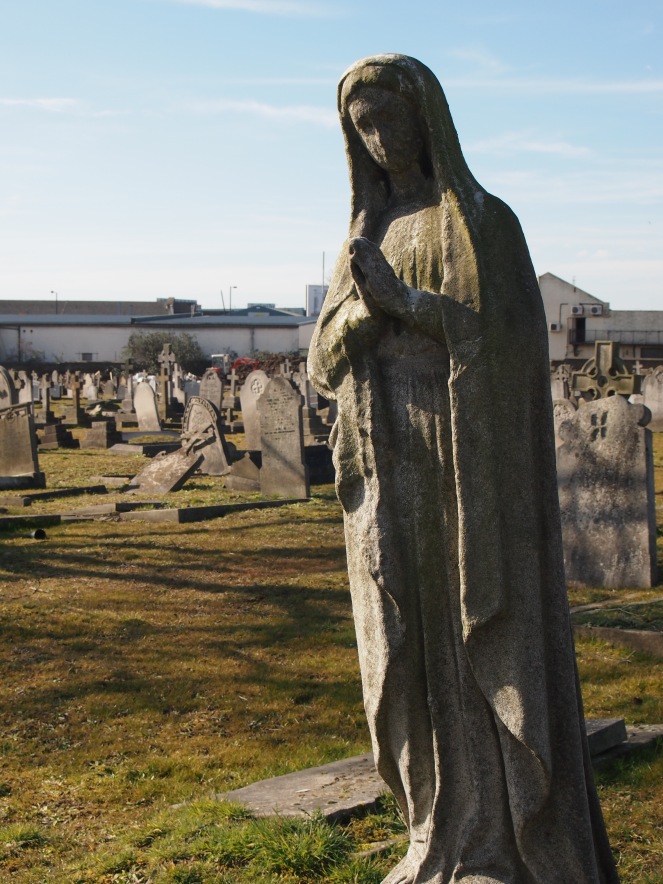 13 thoughts on “A walk among the stone saints and angels: St Mary’s Cemetery, Kensal Green”