If you’ve ever travelled east of Stratford on the London Underground’s Central Line, you’ve probably seen the vast graveyard of St Patrick as the train clatters between Leyton and Leytonstone.  It is the final resting place of around 170,000 residents of East London.  On a pleasant Saturday afternoon, I explored this fascinating cemetery with my friend and fellow graveyard enthusiast Sharon and we discovered so many stories about the people buried there – stories of war, of love, of immigration, of the faith that united all of those buried at St Patrick’s.  Along with St Mary’s at Kensal Green, which Flickering Lamps visited earlier this year, St Patrick’s is one of only two cemeteries in London to cater exclusively to Catholics.

St Patrick’s Roman Catholic Cemetery was opened in 1868, in response to a growing demand for consecrated burial space by the Catholic community in East London.  Its graves range from the monumental to the modest, with a diverse range of nationalities and languages present, reflecting London’s cosmopolitan nature. 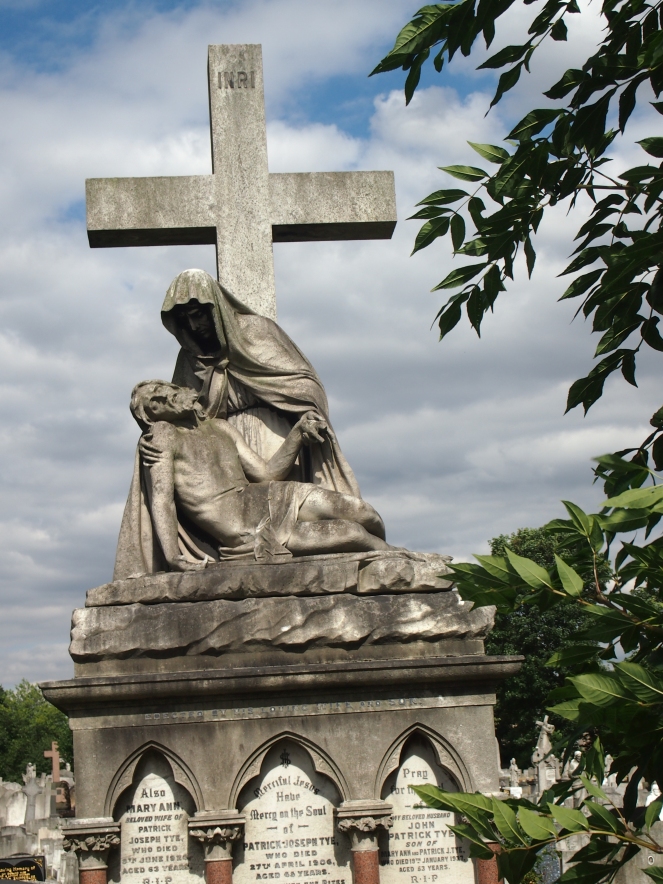 The population of London grew and grew during the 19th Century, as did the city’s physical footprint.  Places that were once small villages surrounded by fields were swallowed up by the growing metropolis, with rows of terraced homes replacing the open spaces.  Some of these Victorian homes can be seen in the streets around St Patrick’s cemetery – both Leyton and Leytonstone were among those places that grew up as suburbs after the arrival of the railways made it easier for people to commute into central London for work.  Nearby Hackney saw its population rise from 38,000 in 1861 to a staggering 125,000 only ten years later.  No wonder St Patrick’s cemetery was opened in 1868.  As a Catholic cemetery, it catered for the sizeable Irish and Italian communities who lived in London in the 19th Century, and their descendants, as well as Catholics from other parts of Britain who moved to London to seek work. 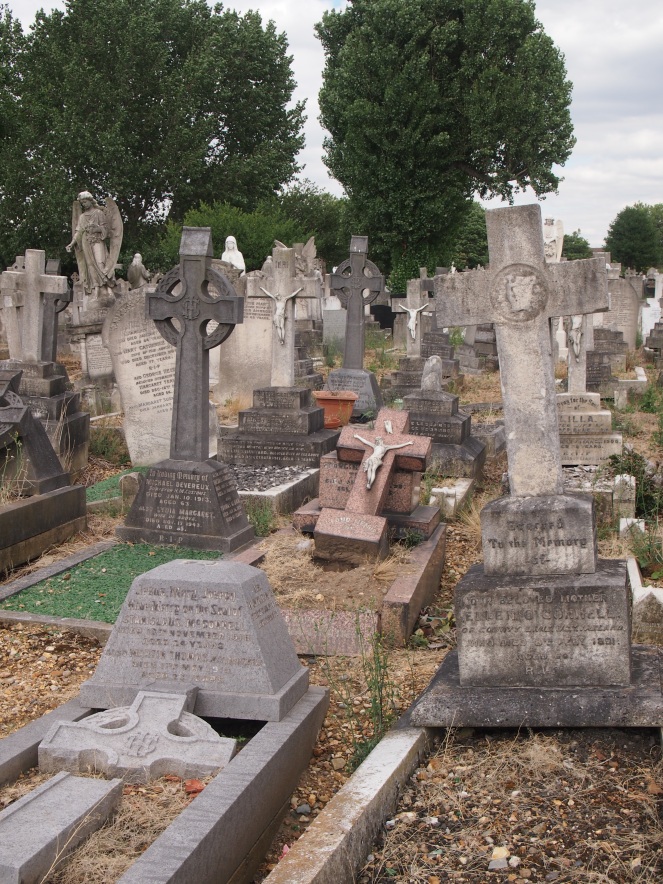 Unlike many Victorian cemeteries that were landscaped and laid out with the dual purpose of being gardens as well as burial grounds, the landscape at St Patrick’s is packed with graves, with few trees or plants in between.  It’s a crowded burial ground, and still in use – in one part of the cemetery, soil has been piled on top of old, unmarked graves to provide extra burial space for new graves. 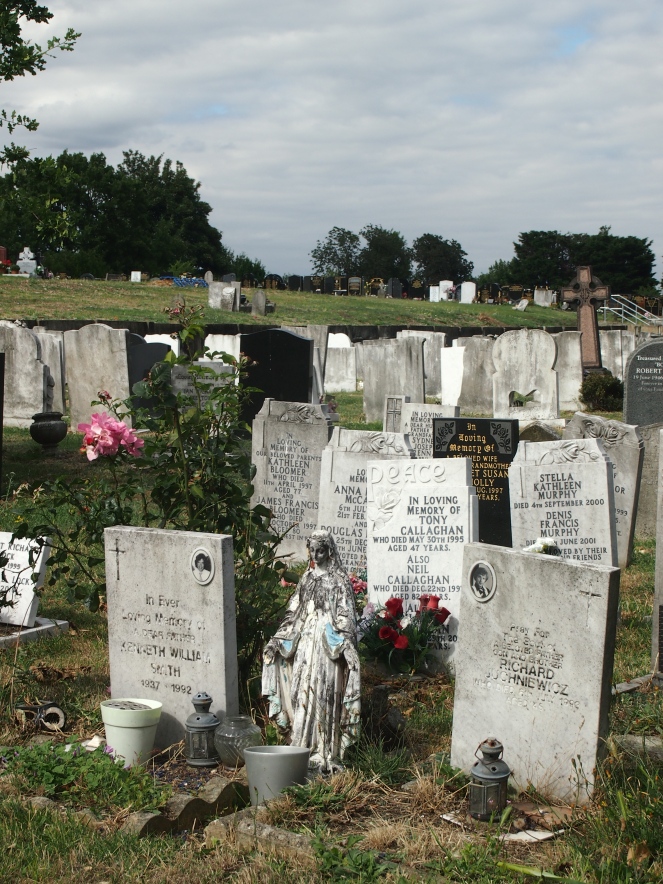 Mary Kelly, one of the victims of the serial killer Jack the Ripper, is buried at St Patrick’s.  We searched for her grave for quite a while, but had to admit defeat as it was getting late and we didn’t wish to get locked in the cemetery!  In fairness, Mary’s grave was originally unmarked (she was buried in a paupers’ grave) and is today only marked with a small stone.  St Patrick’s, however, has no shortage of interesting graves and memorials and Sharon and I spent a lot of time looking closely at the different symbols, saints and stories depicted on many of the gravestones.

The most unusual monument in the cemetery has to be the Ferrari Mausoleum, a concrete modernist structure that stands out amongst more traditional funerary monuments.  It dates from 1965, and commemorates Lucia Ferrari, “Mamma adorabile.”  Its attractive stained glass window, the design of which put me in mind of a tree, is a remarkable survivor.

In fact, by and large, the cemetery didn’t seem to have suffered too badly from vandalism; although parts of the site, mainly those populated by older headstones, are a little overgrown, most of the toppled monuments seemed to have fallen because of the natural shifting of the ground, rather than being pushed or smashed.

St Patrick himself can be found in the cemetery that bears his name.  St Patrick is the patron saint of Ireland – he is credited with converting the country to Christianity in about the fifth century, and was an early bishop there.  The statue of him pictured below shows him in bishops’ robes, holding a shamrock.  The shamrock is a well-known symbol of Irish Christianity and, with its three leaves, is a metaphor for the Holy Trinity.  A serpent is coiled around the bottom of Patrick’s staff; a nod to the legend that St Patrick drove all of the snakes out of Ireland.  Its skin has been stained green by the metal the staff is made out of, a nice effect even if it was unintended.

So many different nationalities are represented at St Patrick’s, all of them united by their Catholic faith.

This unusual statue of a female figure with a heart pierced by seven daggers is Our Lady of Sorrows.  The seven sorrows, symbolised by the seven daggers, refer to seven sorrowful events in the life of Mary, mother of Jesus.  There are many churches devoted to Our Lady of Sorrows, and her veneration is particularly associated with mourning, so it is not surprising to find a depiction of her in a cemetery. 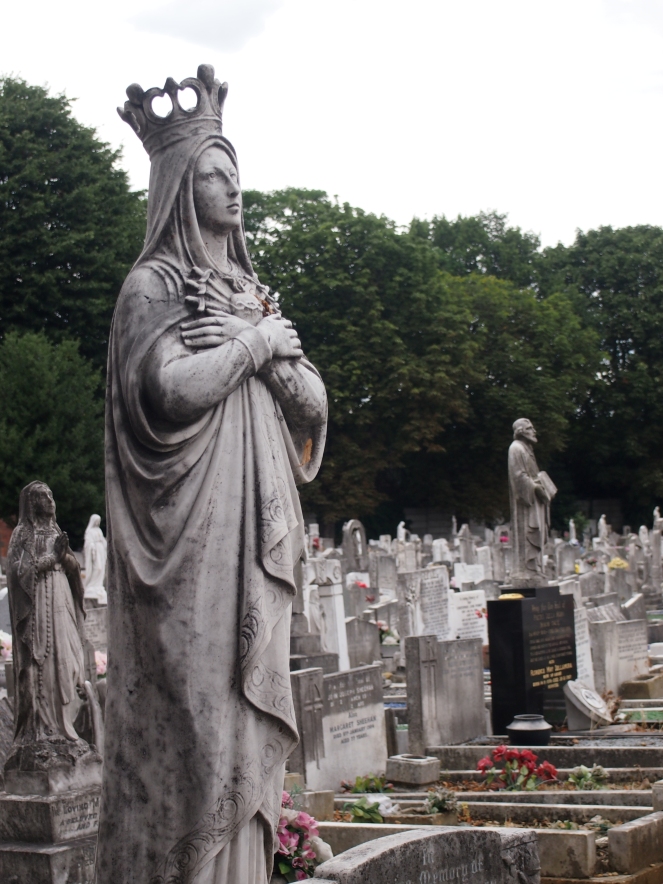 A seemingly ordinary grave, rather overshadowed by large statues, proved to be full of symbolism – but not related to any particular saint or religious theme.  The grave of Ann McSweeney, who died aged just 40 in 1899, is covered in motifs that represent love and devotion.  The clasped hands, joined by a ribbon, are the most obvious symbol of devotion and partnership.  They are surrounded by garlands of flowers – the roses symbolise eternal love, while the lilies represent virtue and purity.  The ivy, delicately carved around the columns of the grave, symbolises friendship and faithfulness, and the metal knots that appear around the edges of the grave plot can represent marriage, as well as resurrection and life everlasting. 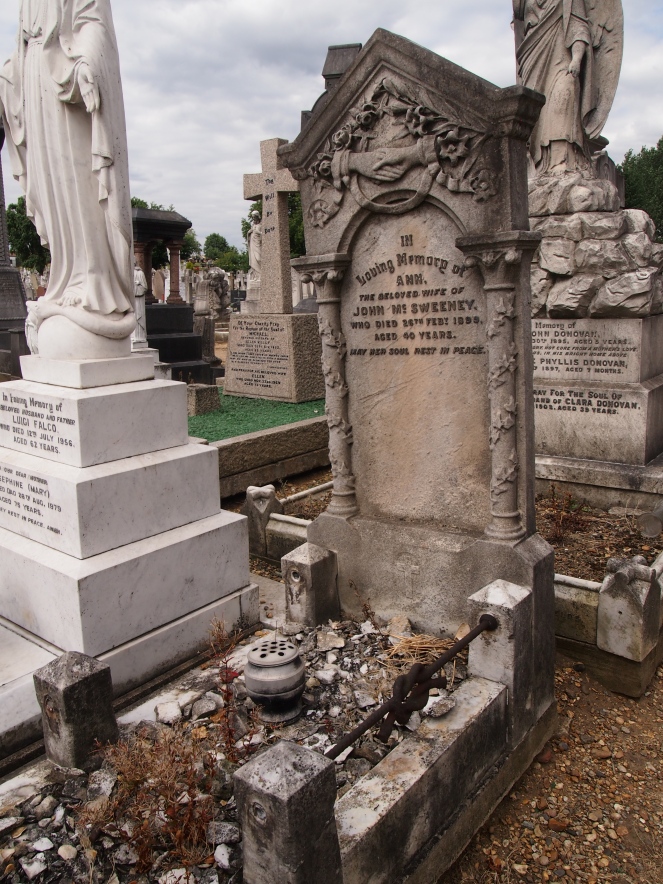 The grave poses one final, beguiling question – what happened to John McSweeney, the grieving husband who commissioned a memorial to his wife that spoke such volumes of their love and devotion?  Is he even buried with her?  There is no inscription on the grave that marks John’s date of death.  Maybe he remarried after the loss of Ann, and was buried with his second wife, or perhaps other circumstances prevented his burial alongside Ann.

Some graves remind us of the terrible losses of war, both for members of the armed forces and civilians.  A large statue of Our Lady of Lourdes commemorates Patrick Donovan, who was killed by enemy action on 28th June 1944.  Many terrifying V1 flying bombs fell on south London at the end of June 1944.  Poor Patrick was one of sixty four people who were killed on 28th June alone.

Service men and women from both World Wars are also represented at St Patrick’s.  The white angel pictured below marks the grave of Private Daniel Foley, of the 3rd New Zealand Machine Gun Corps, who died in January 1919.  A white war grave is also present on the plot.  His death after the armistice of November 1918 suggests that he either succumbed to injuries sustained while in service or was struck down by illness.  He was just 28, and a long way from home.

Another soldier who saw action in the First World War was Laurence William Kenendy, who died on 29th August 1917 after being gassed and wounded on the battlefields of the Somme.

Many other war graves can be found in a beautifully-kept section of the cemetery, with rose bushes planted between the headstones. 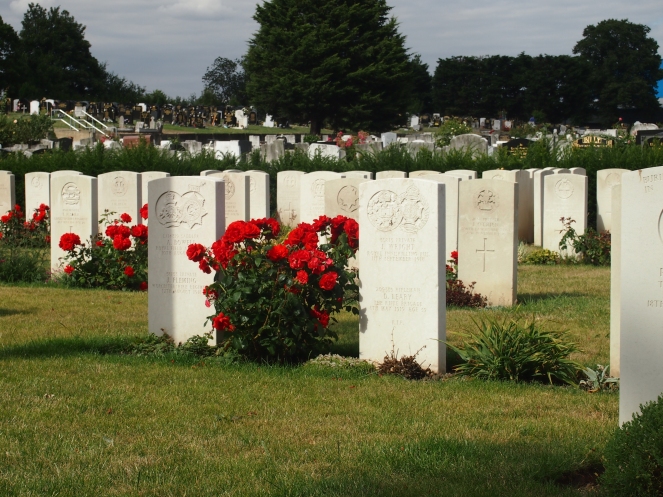 One name on the war memorial caught our eye – a woman’s name.  Leading Aircraft Woman Honorah Mahoney of the Women’s Auxiliary Air Force (WAAF) died on 26th January 1944.  It’s not been easy to find any information about Honorah, but the Commonwealth War Graves Commission’s entry on her states that Honorah was 23 years old when she died, and that her parents were from Bow in East London, which may explain why her name is on the memorial at St Patrick’s.  Honorah’s name also came up in a list of unaccounted airmen and women from 26th January 1944 – it’s not known exactly how she died, but she may have been killed when flying a plane between bases.  Many WAAF women – who were not permitted to take part in combat – were pilots who undertook the sometimes dangerous work of flying aircraft to different RAF bases.  Many others worked at air bases working on communication, intelligence or catering – all risky work, as air bases were frequently the target of enemy bombs. 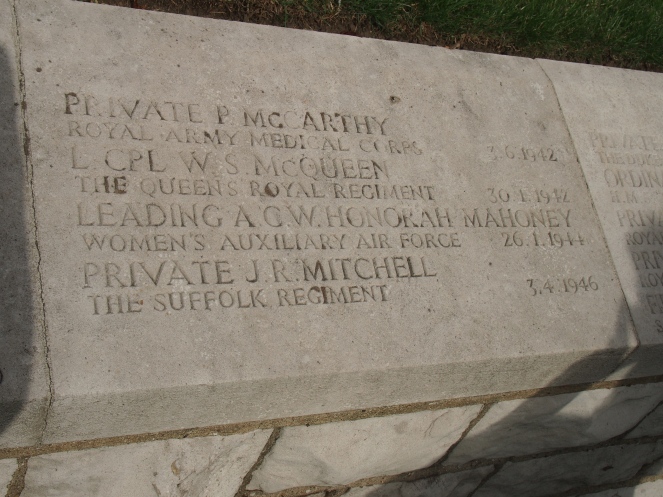 One damaged grave gave an insight into some of the materials used to create the decorations on gravestones.  An image of the crucified Christ had been broken, showing its hollow interior and how the ceramic figure had been attached to the stone cross.  I’d never really thought about what these figures were made of before.  We spotted several other intact figures that were identical in design to the broken one – they look to have been mass-produced. 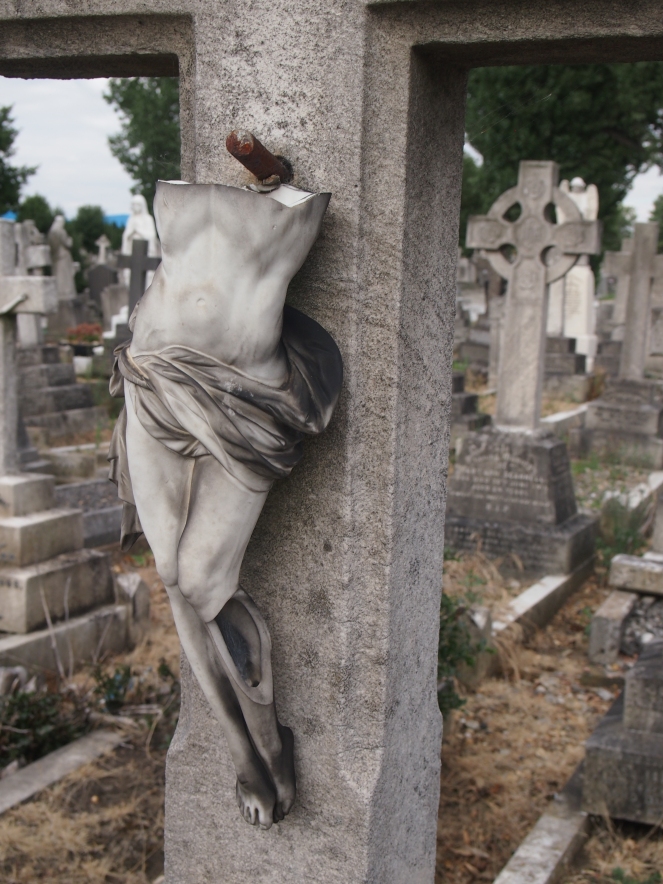 St Patrick’s is a wonderful, underrated cemetery, and well worth a visit if – like Sharon and myself – you are interested in the statues and symbols that people chose to commemorate their loved ones.  The graves featured in this article are just a tiny selection of so many fascinating monuments, large and small, that reflect the faith and traditions of people from all over the world.  This vast necropolis of stone and marble tells countless stories of lives lived in London and elsewhere, of families who came to the city to begin a new life, of lives ended tragically, of people very much loved and missed.  It won’t be the last time that I visit a cemetery and spend more time thinking about life than death. 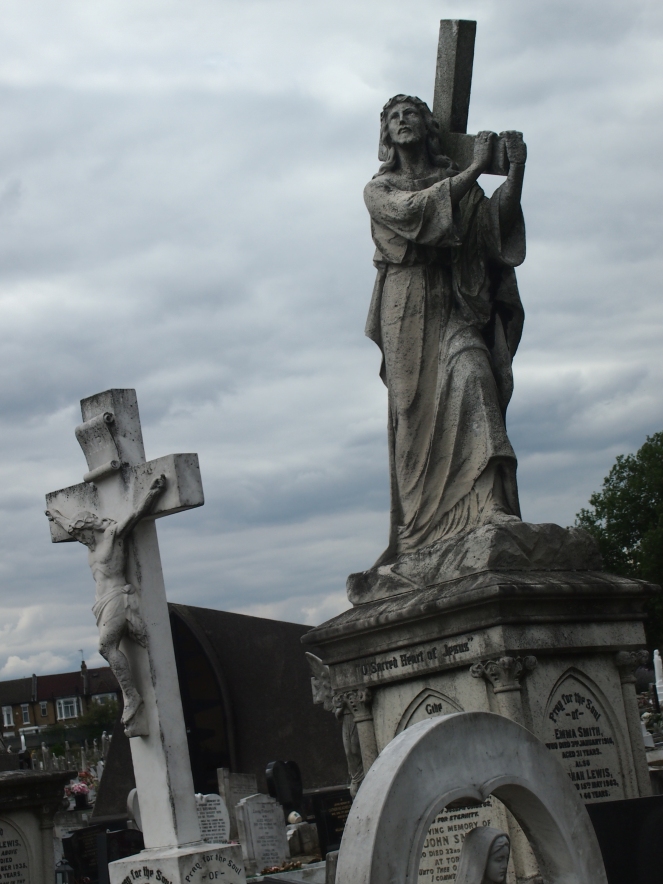 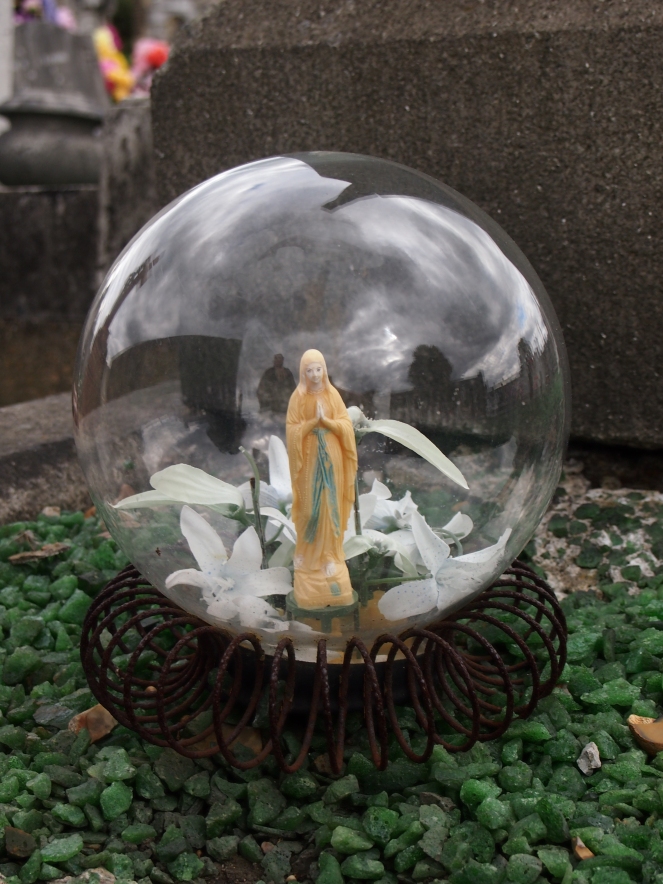