There has been a church on this site for centuries – the church’s website speculates that the first Christians to worship in this area may have been Roman soldiers; Shoreditch is where several Roman roads meet and would have been an idea spot for a camp, close to the walls of Londinium.  St Leonard is the patron saint of prisoners and those suffering from mental illness.  A church may have existed in the area in the Anglo-Saxon period, but the earliest surviving records of St Leonard’s date from the 12th Century. 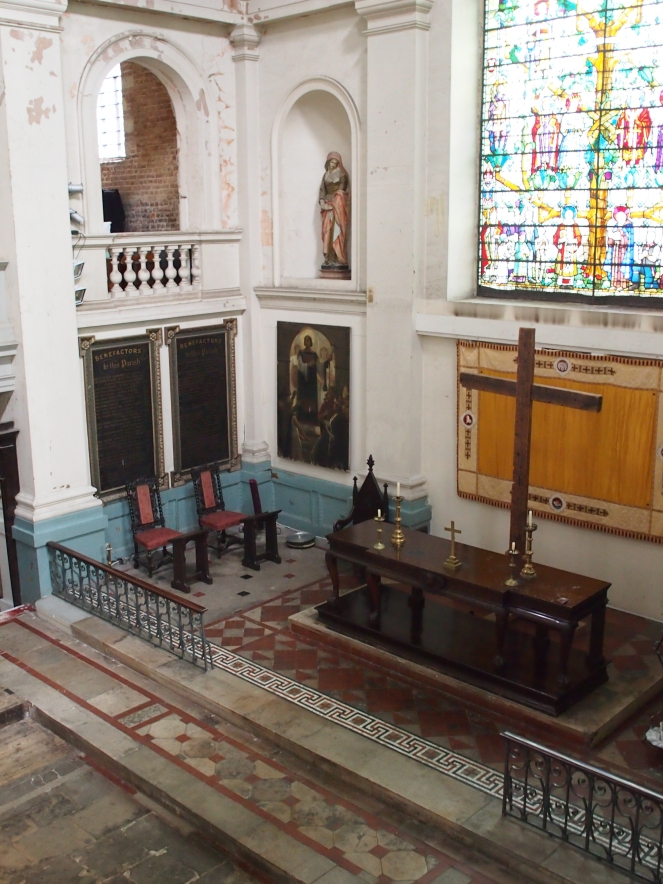 These days Shoreditch is very much an inner-city area, but in the medieval and early modern periods it was a suburb of London, outside of the main city walls and not subject to its laws.  This meant that institutions prohibited within the City of London could flourish in Shoreditch – the most famous of which were Shoreditch’s theatres.

William Shakespeare was active in Shoreditch for many years, and many of his earlier plays were first performed in the area, which in the 1570s became London’s first theatre district.  Archaeologists are currently excavating the site of the Curtain Theatre, which opened in 1577, and where it is believed that Shakespeare’s Henry V debuted in about 1599.

However, it is the Burbage family that is most closely associated with St Leonard’s Church.  James Burbage, a joiner by trade, built the first of London’s great Elizabethan theatres close to St Leonard’s in 1576.  Simply known as The Theatre, this was one of the first permanent, purpose-built theatres to have been built in the city since the time of the Romans – previously, troupes of actors had performed in the yards of inns, and the design of Burbage’s theatre reflected the spaces already used for the staging of dramas.  The Lord Chamberlain’s Men, the famous company of actors that included William Shakespeare and James Burbage’s son Richard, began performing at the Theatre in 1594, before legal problems forced a move to the nearby Curtain Theatre in 1597.  The company eventually relocated to the Globe Theatre south of the Thames in 1599.  By this time, legal disputes between the Burbage family and the landlord of the site the Theatre was built on had been raging for years, and the Theatre was dismantled in 1598, its materials being used to construct the Globe.

Both of James Burbage’s sons, Cuthbert and Richard, were actors, with Richard being a particularly celebrated figure and a close associate of William Shakespeare.  James, Cuthbert and Richard Burbage were all parishioners of St Leonard’s, and their bones lie in the old crypt beneath the church.

The medieval church to which this crypt belonged was in a very poor state of repair by the beginning of the 18th Century.  A river running close by had undermined its foundations during periods of flooding and a part of the building collapsed in 1716.  George Dance the Elder, a respected architect who had worked with Christopher Wren, and who is probably best known as the architect of the City of London’s Mansion House, was chosen as the man to design a new church.

The new church was completed in 1740, and today it is the second-oldest building in Shoreditch – the oldest being the Clerk’s House, located next door, which dates from 1738.

High up on the wall of the church is a handsome oak dole cupboard, surviving from the 18th Century.  This is where bread and other alms set aside for the poor of the parish were kept – its lofty position is an attempt to keep mice and other pests from pilfering the food inside.

The pioneers of Elizabethan theatre buried in the crypt were not forgotten – an impressive marble tablet records the names of the Burbages, and others buried in the church who had links to the area’s theatres.  As the little brass plaque pictured below demonstrates, St Leonard’s is still proud of its reputation as the first “Actors’ Church”.

Away from the world of theatre, there are other illustrious names associated with St Leonard’s – many of them have memorials inside the church.  James Parkinson, who was born in nearby Hoxton Square, was the man who first identified – in his 1817 work Essay on the Shaking Palsy – the progressive neurological disease that is now named after him: Parkinson’s disease.  Before he published this famous work, he was a keen geologist, and also had an interesting political career, where he had been involved in many campaigns for social reform and universal suffrage.  He also had an interest in palaeontology, collecting fossils and publishing Organic Remains of a Former World in 1804.  His medical practice was based at 1 Hoxton Square and his political beliefs were an influence on his medical career – he was a strong advocate for the legal protection of those suffering from mental illnesses. 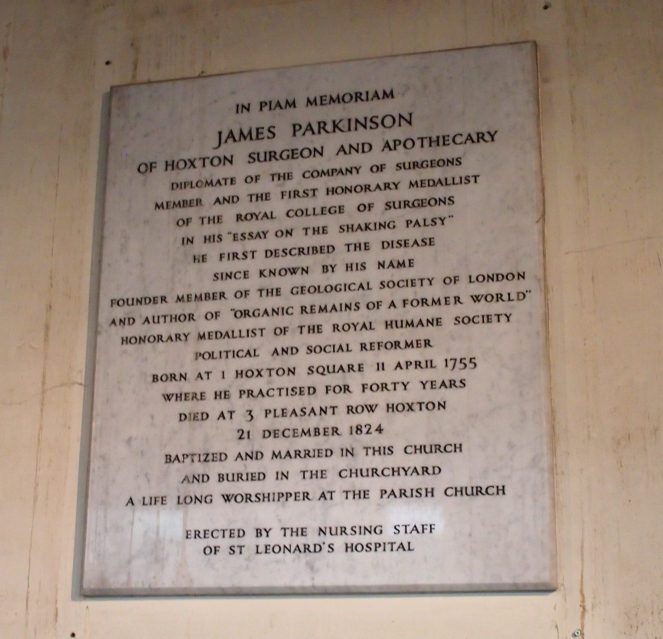 Another resident of Hoxton associated with St Leonard’s is Thomas Fairchild, a gardener who published a book about the plants that were best suited to being grown in London.  He worked in, and later owned, a nursery in Hoxton, where he had a vineyard and grew all sorts of exotic plants.  Fairchild was a controversial figure – he was the first person to produce a man-made hybrid plant, which many people at the time believed to be an insult to God’s creation.  Hybrid plants had of course occurred naturally before this, but Fairchild was the first person to deliberately create one, crossing a carnation with a Sweet William.  In many ways the criticisms of Fairchild’s work mirror more recent anxieties over the ethics of genetic engineering and modification.  Fairchild died in 1729 and was buried in the churchyard extension, now a small park just off Hackney Road.  He left money to the church for an annual sermon to be given on the works of God and the wonders of Creation.  This sermon took place in later years at the church of St Giles Cripplegate, which was conveniently located close to the Workshipful Company of Gardeners’ Hall, but the “vegetable sermon” has recently been revived in its original location at St Leonard’s. 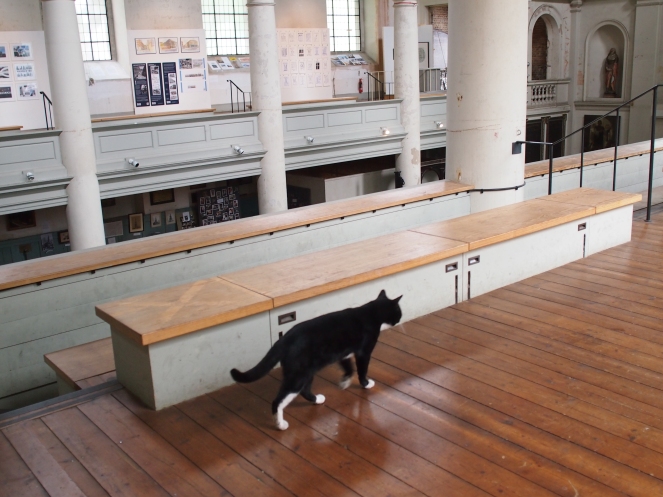 The most elaborate memorial tablet in the church is located in the upper gallery.  Two carved skeletons are tearing an oak tree apart; between them is a Latin inscription.  The memorial is to Elizabeth Benson, who died in 1710, and who – according to the list of parish benefactors near the altar – left the considerable sum of £200 to the parish, to be put towards the cost of a workhouse.  The elaborate memorial tablet was carved by Francis Bird, one of the leading sculptors of the age and the man responsible for many of the statues that adorn St Paul’s Cathedral.  Part of the inscription gives us an insight into Elizabeth’s death, which may well have influenced the choice of imagery used on her memorial: hale and hearty and regardless of old age she accidentally tripped and fell, alas, at the age of 90; and the stem of life was not gently withdrawn but torn asunder. 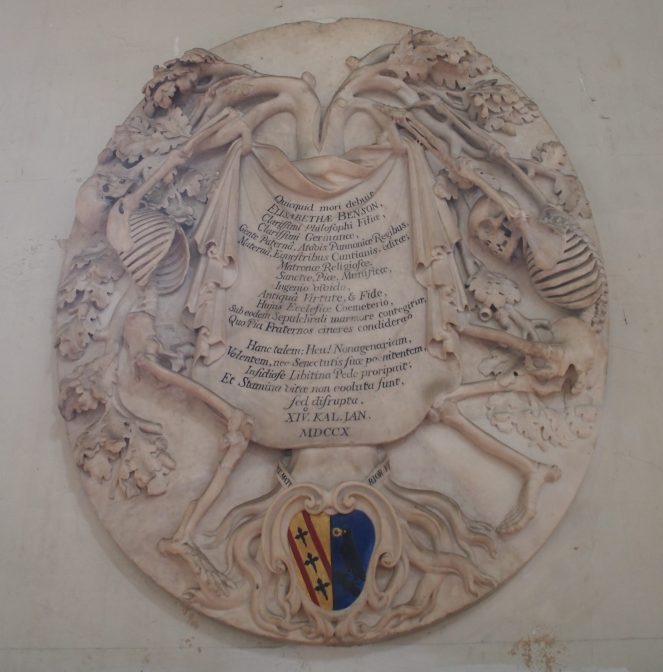 It would appear that Bird’s design for Elizabeth’s memorial was inspired by an etching made a half-century earlier by the Italian draughtsman and printmaker Stefana della Bella.  Della Bella worked in Paris and Florence during his career and produced over 1,000 prints and thousands of drawings.  The Cartouche with Skeletons, pictured below, a depicts a very similar scene to that depicted on Elizabeth Benson’s memorial tablet.  Francis Bird spent some of his career in Rome – perhaps it was during his time there that he first came across della Bella’s work.

Although not directly hit by any bombs during the Second World War, St Leonard’s suffered considerable damage from bombs and V1 rocket strikes that fell nearby.  Priceless medieval stained glass was shattered and lost – the impressive stained glass window behind the altar dates from the 1950s (paid for by the Worshipful Society of Gardeners) – and the church roof was badly damaged.  The church was repaired, but the war damage, coupled with unsympathetic alterations made during the Victorian period, led to the structure becoming unsafe and St Leonard’s was closed for a couple of years during the 1990s while the church was made safe again.

Today, the church very much remains at the heart of community life in Shoreditch.  The area is undergoing rapid change and gentrification.  For a long time a very poor district – behind St Leonard’s is the site of the Old Nichol, one of Victorian London’s most notorious slums – Shoreditch’s proximity to the financial district of the City has seen parts of the area transformed.  New technology businesses have arrived, and with them have come upmarket shops and bars, and a multitude of new office and residential developments.  But if you look beyond the hipster bars and tech start-ups there is still a lot of poverty and need in this area.  Next door to St Leonard’s is a housing complex for people recovering from addiction.  St Leonard’s has been at the heart of campaigns to oppose those developments which threaten to destroy the historic fabric of the area whilst bringing no benefit to local people – towering office blocks and unaffordable flats marketed off-plan as investments.  Many meetings have been held at the church, and when I visited the upstairs gallery was the location of an exhibition of artwork and information about the developments currently being opposed, in particular those at Norton Folgate and the Bishopsgate Goodsyard.

Thank you very much to Robin, who showed me around the church and who told me about the many people and campaigns associated with the church.  I’m hoping to return to this wonderful church to visit the crypt, where many tombs dating from the old church – including those of the Burbages – are still located.

UPDATE: Schrodinger the cat has now found a new home with the author of Spitalfields Life, the Gentle Author. 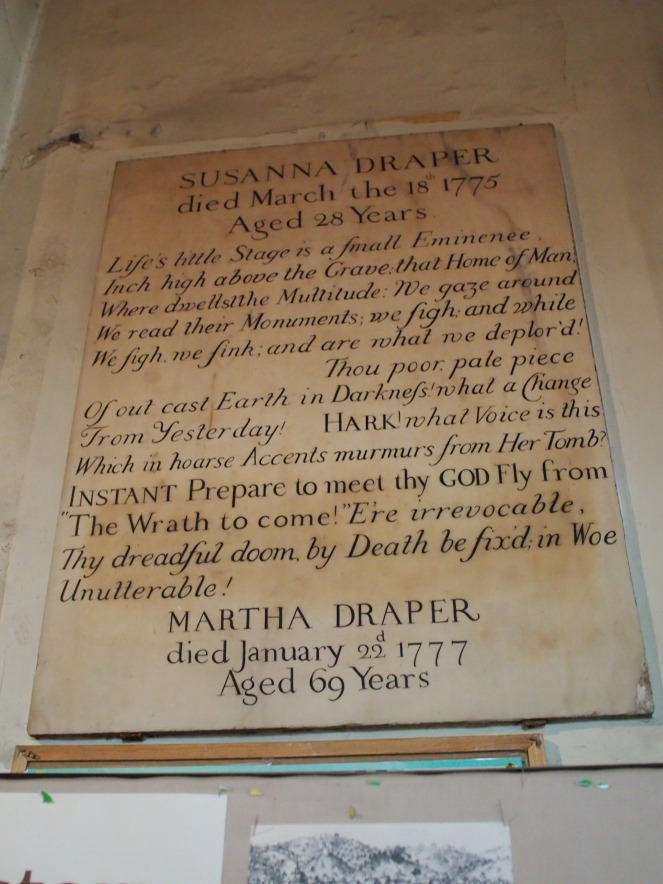