The tiny village of Dunwich clings to the edge of the Suffolk coast and is in many ways a pretty but unremarkable place, a sleepy settlement a long way from any large towns.  There’s a beach, a place to buy ice cream, a little museum, a pleasant old pub that draws visitors from miles around.  But in the grounds of its Victorian church, and in a field on the edge of the villages, are ruins that suggest a more propserous past.  Two impressive archways welcome the motorist into Dunwich, a sign between them proclaiming that they are a part of Greyfriars, Dunwich’s medieval friary.  The ruins of this Franciscan friary are some of the final remaining relics of what was once a thriving and significant port – an ancient settlement that today is sometimes dubbed “Britain’s Atlantis” due to most of its medieval fabric now lying beneath the North Sea. 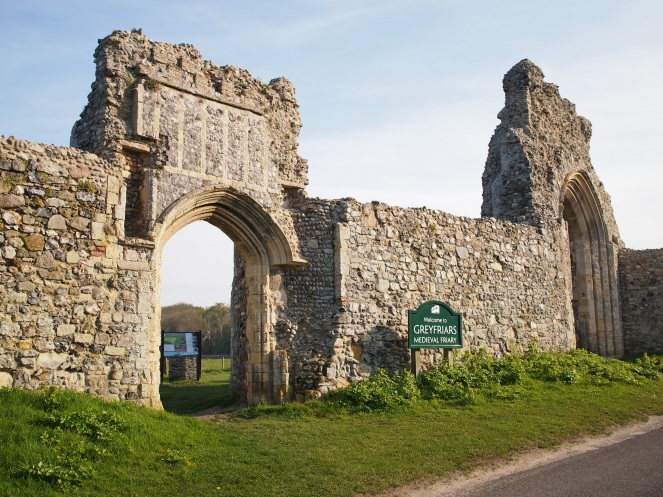 Apart from the impressive archways at the friary’s entrance, a few walls and archways survive from the old building.  It’s thought these ruins are from the old refectory and kitchens that served the site.  The height of the remaining walls gives the visitor some idea of how large and imposing the complex must have been when it was newly-built – this was a wealthy place, sturdily built in stone.  The friary was founded at the end of the 12th Century, possibly on a different site closer to the sea, and the stone buildings are thought to date from the late 14th Century.  Perhaps the friars relocated at that time due to their previous quarters getting precariously close to the cliff edge.

Despite Dunwich’s decline as a port in the later medieval period, the friary continued to prosper, probably at least in part because its 14th Century stone buildings were further away from the sea than the other buildings that were gradually falling off the cliffs as they eroded.  The Franciscan friars were popular in Dunwich; their acts of charity benefitted the town’s poor and vulnerable people and many wealthy people left the friary bequests which probably helped to fund the impressive buildings that graced the site by the end of the 14th Century.

Greyfriars was not the only religious foundation in Dunwich.  As a town with a large population in the medieval period, it had six parish churches at its height and it was also home to Dominican friars, a Benedictine cell and a church of the Knights Templar, which passed into the ownership of the Knights Hospitaller after the suppression of the Templars in 1322.  It’s thought that the Templars’ church was a round structure, similar to the Temple Church in London.  The ruins of a leper hospital can be found in the churchyard of the Victorian church of St James in Dunwich, and it is thought that other hospitals also existed in the medieval town. 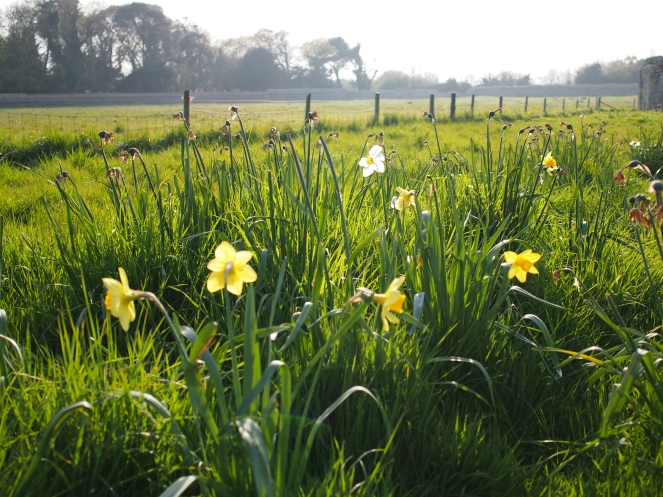 In 1538 the friary at Greyfriars was dissolved, and many of the impressive stone buildings that stood on the site were demolished.  The site later passed into private ownership, and in the 18th Century the perimeter walls of the friary were rebuilt – they still survive today.  In 1981 the site came under the care of Suffolk County Council and today there are information boards on the site explaining its history to visitors, and giving an idea of how it may have looked when it was a functioning friary.

People have lived and worked in Dunwich for many centuries, perhaps even millennia.  Archaeologists surveying the ruins that now lie under the North Sea have discovered artefacts dating back to the Neolithic period.  It’s thought that there was a Roman settlement on the site, and Dunwich certainly thrived during the Anglo-Saxon period.  The Domesday Book records the port has having about 3,000 inhabitants in 1086, making it a large and significant settlement – it’s thought that by the end of the 11th Century, Dunwich was about the tenth largest town in the whole of England.

The loss of the medieval town to the North Sea was not caused by any single, cataclysmic event.  The terrible storms which lashed the southern and eastern coasts of Britain in the late 13th Century – the storms that caused such terrible damage in towns like New Romney – undoubtedly hastened the demise of Dunwich but the loss of land to the sea was not a new phenomenon even then.  Between 1066 and 1086, the year the Domesday Book was complied, Dunwich had lost about half of its farmland to the sea, and coastal erosion must have been a constant source of worry and frustration for the area’s inhabitants.  However, as a prosperous port, the people of Dunwich must have committed a lot of time, labour and resources to the upkeep of the harbour, shipbuilding facilities and coastal defences that were vital to the town’s success.  It’s thought that in the 10th or 11th Century a dyke was dug in an attempt to protect the town from the destructive power of the sea.

However, at some point, following a number of extremely violent storms happening over a relatively short period of time, the battle to save Dunwich from the sea was lost and the town fell into an irreversible decline.  It was not abandoned overnight – a number of its religious foundations, including Greyfriars, endured until the Reformation – but its population began to fall as it declined as a port and its heyday was over.

A Topographical Dictionary of England, published in 1848, describes Dunwich’s plight:

being situated on a hill composed of loam and loose sand, it has yielded to the successive encroachments of the sea, which has demolished its edifices, ruined its haven, swallowed up its streets, and reduced it to an insignificant village.

Today, almost all of medieval Dunwich lies beneath the waves.  The last of the port’s ancient churches, All Saints, was abandoned in the mid-18th Century as the cliff edge moved ever closer.  The church’s ruins hung on until the early 20th Century, finally disappearing completely in the 1930s – this webpage has images of the ruins over many years, showing them at various stages of their destruction.

The graveyard that surrounded All Saints remained in use for a few years after the church was abandoned, and today a solitary headstone remains from this burial ground.  The grave of Jacob Forster is perched right on the edge of the cliffs, behind a fence that warns visitors not to get too close to the cliff edge.  When Jacob Forster died in 1796 his final resting place was still a long way from the sea; now, it is likely that within a few years his bones will join those whose graves were already lost to the sea.

Advances in technology in recent years have allowed archaeologists to explore, excavate and map the underwater ruins of the old port, with fascinating results.  The underwater ruins have proved a difficult site to work on; visibility is poor and as a result some novel methods have been employed to give researchers a better idea of what lies beneath the water.  The use of acoustic imaging has produced 3D images of streets and ruined buildings under the sea, which have been compared to old maps and plans of Dunwich to get a clearer idea of the port’s size and major features.

The Channel 4 archaeology programme Time Team also visited Dunwich in 2011, carrying out excavations at Greyfriars and beneath a nearby car park, revealing more about the layout of the old friary and finding an impressive medieval pavement beneath the car park, although the hospital building they had hoped to find eluded them.

In a few decades or centuries the ruins of Greyfriars will disappear into the North Sea.  Preserving artefacts from the past is often a battle against nature, regardless of location, but on this coastline storms and the constant march of coastal erosion will no doubt continue to whittle away at this ancient settlement until even the very last ruins lie under the sea.

Dunwich Museum – the small museum with a big history http://dunwichmuseum.org.uk/index.php

Archaeologists map lost medieval Suffolk town of Dunwich under the sea – The Guardian, 10th May 2013 https://www.theguardian.com/science/2013/may/10/archaeologists-map-suffolk-dunwich-sea